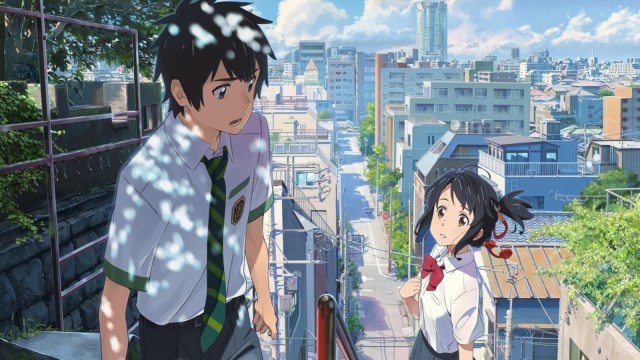 One of the greatest anime films of the last decade is getting a live-action remake thanks to Hollywood not being able to leave perfectly good films alone. 2016’s animated masterpiece, Your Name, from filmmaker Makoto Shinkai, was immediately recognized as one of the most beautiful animations to come from Japan outside of Ghibli Studios. Its critical and commercial success led to Paramount wanting a live-action remake and they have finally found their director to helm the project.

Paramount, along with Bad Robot and Toho, has now enlisted Carlos López Estrada to direct and write the current script for Your Name. López Estrada is an Academy Award-nominated director from Mexico City who started off directing music videos, working alongside the likes of Bille Eilish, Katy Perry, Carly Ray Jepson, and Clipping.

His debut feature film Blindspotting premiered on the opening night of 2018’s Sundance Festival. The director received instant acclaim for the film, with a bidding war starting over who would get to release it which was eventually won by Lionsgate Entertainment. He had similar success with his second film, Summertime, in 2020. Many will know the director for his role as director of the Disney animation, Raya and the Last Dragon, which was nominated for an Academy Award for Best Animated Feature.

The live-action will tell more or less a similar story to the animation. In this re-imagined version, two teenagers discover they are magically and intermittently swapping bodies. When a disaster threatens to upend their lives, they must journey to meet and save their worlds.

The remake was initially set to be directed by Oscar Award-winning Minari director, Lee Isaac Chung, however, due to scheduling conflicts, the director stepped down from the role back in July. The project, which has been in the works since 2017, still doesn’t have a finished script as Chung was set to rewrite it with Arrival writer Eric Heisserer, working off of an earlier draft by Emily V. Gordon (The Big Sick).

This isn’t the only live-action remake that López Estrada is working on as he is currently developing a live-action CGI adaption of Disney’s Robin Hood. He is also working on an animated feature documentary set to release in 2023. On board the Your Name remake is sci-fi director J.J. Abrams in the role of producer along with Hannah Minghella and Jon Cohen, with Genki Kawamura, who produced the original. Paramount is likely looking to re-create the success of the original animation which grossed $230 million in Japan alone.