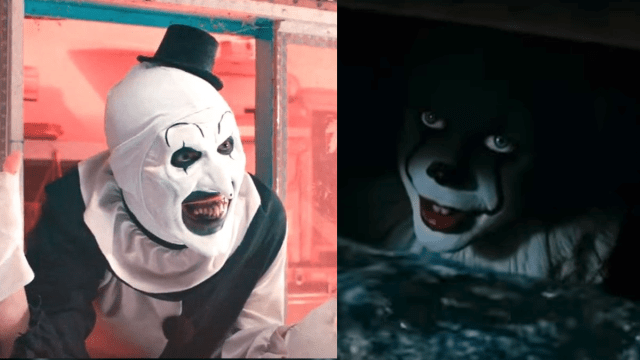 For many of us, the mere idea of a clown, regardless of whether or not it has any ties to the supernatural, or even whether or not it’s entirely void of malevolence, is more than enough to gift us a “nope” moment and have us briskly walk away in the other direction.

Perhaps it’s the makeup that masks the reality of the person behind it, or maybe they simply just look creepy, but clowns have managed to cement themselves as particularly effective objects of horror, and many a creative — particularly filmmakers — have taken full advantage over the last several decades.

The most famous of these cartoonish cretins has to be Pennywise, the shapeshifting entity of Stephen King’s It franchise, which found impressive success in its two most recent film adaptations in 2017 and 2019, respectively. But with the long-awaited Terrifier 2 having made its theatrical splash earlier this month, the beloved slasher villain Art the Clown is in the middle of a high-profile reappraisal that just may put him toe-to-toe with some of horror’s most iconic baddies.

But which clown would you rather not run into in a dark carnival tent? Given either clown’s drastically different modus operandi, it’s a hard answer to pin down.

What must first be understood about Pennywise is that its clown shape is not its true form; it simply takes on such a form to help trigger fear in its victims. Pennywise does this to “salt the meat,” as it were; the entity feeds on human fear, which it does by devouring the human itself once the body is filled with such fear.

It chiefly creates fear in its victims by crafting a curated waking nightmare for the victim, manipulating reality so that it takes the form of the victim’s greatest fears. So while most of Pennywise’s fear factor stems from something other than its clown motif, the idea that all of that makeup masks an incomprehensible cosmic entity that wants to eat you is one of the most debilitating fears around.

Art is the antagonist of the Terrifier franchise (as well as a handful of other stories), whose latest entry, Terrifier 2 sees him get resurrected by a demonic entity. But Art’s fear factor is infinitely more palpable than his all-powerful Kingverse counterpart; in place of reality manipulation is monstrously-graphic bloodshed by way of blades and bullets, accompanied by Art’s childlike glee as he commits it.

The mute, animated, giddy motif of the clown caricature, then, is significantly more utilized here, but Art’s fear factor — one that’s more akin to blunt trauma and shock by way of his gory dismemberments — is then perhaps cheaper than the psychological disassembly that Pennywise commits.

So, who’s the scarier clown?

Ultimately, it boils down to one’s personal parameters; the distinction of “scarier clown” perhaps goes to Art, who arguably makes better use of the clown motif than Pennywise, but the scarier being overall just might go to Pennywise, who inhabits a space and power level that dwarfs our realm of comprehension, and there’s arguably no fear more intense than that.

But at the end of the day, it doesn’t really matter which clown is less scary; either one would send any sensible person to the opposite side of the world if it meant avoiding them.