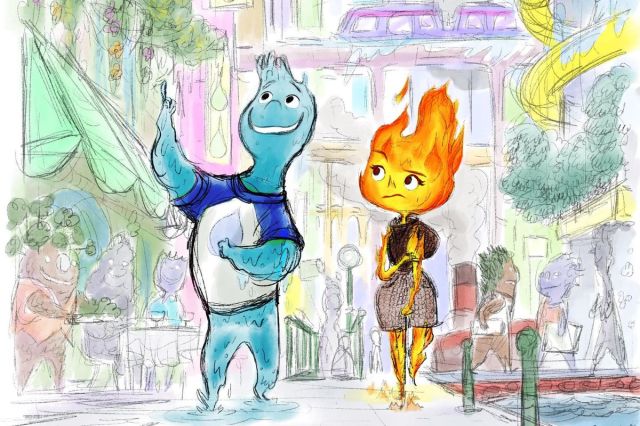 Pixar has been killing it lately, with films like Luca and Turning Red bringing new, beautifully animated stories to our screens, and at D23, the studio discussed their upcoming animation, Elemental. With the tagline “opposites react” both a play on the phrase “opposites attract” mixed with a little science humor there, the film will follow two characters who have more in common than they realize.

The world is one in which the elements have been anthropomorphized, in a city where fire, water, land, and air residents live together. In this world, a fiery young woman and a go-with-the-flow guy are about to discover something elemental: how much they actually have in common. Discussing the characters on stage were director Peter Sohn (Partly Cloudy and The Good Dinosaur) and producer Denise Ream (Cars 2 and The Good Dinosaur) who introduced the audience to a first look at the character designs of Ember and Wade — no hard thinking is required to figure out which elements these two are.

With Ember, Sohn discussed how the character will have a fiery temperament to match her fiery design, of which he divulged, “At Pixar, we just wanted to make sure that she looks like she is made of fire instead of being on fire.” He then brought up an image of the next main character, continuing, “and this is Wade! He is our sappy water guy and because he’s transparent we always know what he’s feeling.”

Ream stepped in to add, “Now the chemistry of these two characters is such an important part of this movie, and finding two actors who can bring that same chemistry is equally important.” She went on to introduce the two leads with Leah Lewis (Ember) and Mamoudou Athie (Wade), making their way onto the stage.

Speaking to FilmIsNow after the announcement, Lewis gushed about the opportunity to be a part of the Disney Pixar family and getting to attend D23. Going on to discuss what audiences can expect from her character she said,

“I am most excited to see the audience really connect to a character that loves her family, is incredibly hard on herself, and is just filled with love that she has to give. She is someone that is an amazing character but also has a lot of self-work and to see her also meet a water boy who kind of changes her whole take on life. I’m excited for people to see that our differences can bring us together as well too.”

No other cast members have been announced at this time.

Elemental will be a summer release for Disney/Pixar with the release date set for June 16, 2023.