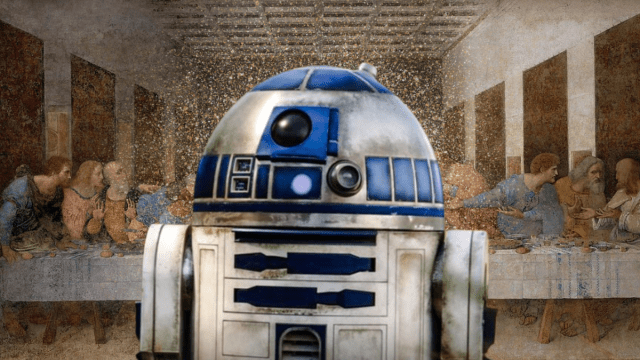 The most lovable and prolific droid in the Star Wars galaxy may just be the most powerful and evil being out there, a new fan theory believes.

R2-D2, a humble astromech droid who has aided the the likes of Anakin Skywalker, Obi-Wan Kenobi, Ahsoka Tano, Luke Skywalker, Rey Skywalker, and Lando Calrissian may not be the heroic aid we’ve seen him as for years, according to a theory sweeping through Reddit.

What if, instead of a great sidekick, he’s actually the evil genius who worked alongside Darth Sidious to create a fascistic galactic government? Yes, it sounds crazy, but this theory posited by Redditor /u/wentzitcame thinks it makes perfect sense, and it has gotten discussion going.

The core part of this theory revolves around R2-D2’s first known adventures happening nearly at the exact point the galaxy started to learn about this Sheev Palpatine fellow. In fact, all of R2-D2’s adventures came in the lifetime(s) of Palpatine, and seemed to have coincided with the dark lord of the Sith accruing power.

The idea is mostly ridiculous though, with R2-D2 shown to be so immensely helpful to the heroes across the galaxy. It’s hard to believe that R2 would just allow, say, for him to let Luke blow up the Death Star in 1977’s A New Hope. Or the rebels doing it again in Return of the Jedi. Or leading the Resistance back to Luke Skywalker, thus allowing Rey to get properly trained to defeat Palpatine.

But, it’s always fun to rethink our heroes motivations, especially ones who are mostly mute. R2-D2 is one of the most marketable characters from Star Wars, and pretty much anything that can be R2 themed will be R2 themed. For him to end up a secret villain would be hilarious.