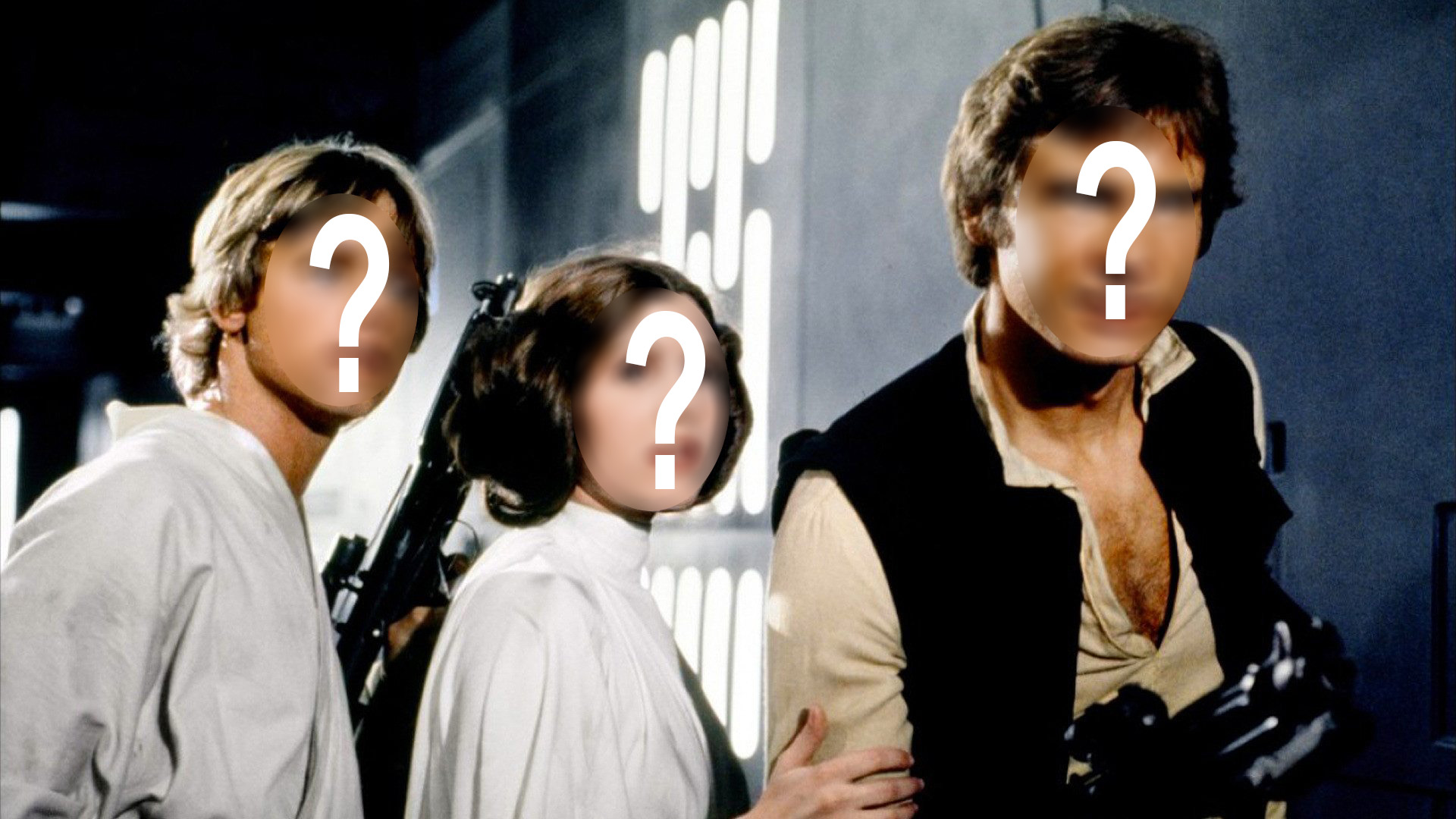 Hollywood is currently abuzz about a hot new script. After years of samey superhero movies clogging up multiplexes, the next big thing might finally be here: a franchise that could stand toe-to-toe with the MCU and has the potential to spawn an empire.

They’re calling it “Star Wars” and it’s the work of hot young thing George Lucas, perhaps better known as ‘1138KID’, who burst onto the scene back in the early 2010s with his viral YouTube videos.

Okay, history didn’t go down this alternate path, but what if we were making Star Wars: A New Hope today, and were on the hunt for actors to play these iconic roles? Let’s put on our fancy casting director hat, whip out the rolodex, and hold some auditions.

For the New Hope-era Luke, you need a fresh-faced young actor that projects optimism and wholesomeness. Mark Hamill was 26 when he was cast, so we’re hunting for someone around that age for our Luke. These days the popular fan option for recasting Luke is Sebastian Stan, but while the 39-year-old The Falcon and the Winter Soldier star could easily play a post-Return of the Jedi-era Luke, he’s not a great fit for the younger version seen in A New Hope.

Candidates that first spring to mind are Tom Holland and Timothée Chalamet, both of whom are the right age and can lead a sci-fi blockbuster. Let’s rule out Chalamet though, as he’s already playing a desert-dwelling young man grappling with mystic powers in Dune. Holland might be better, though he doesn’t seem ready to leap into a potential franchise after No Way Home and is again a tiny bit too obvious.

This is Chilling Adventures of Sabrina star Ross Lynch. He made his name as a young actor on Disney’s Austin & Ally, had a successful music career, and was one of the core members of the beloved (but unjustly canceled) Netflix show’s cast. However, it’s 2017’s My Friend Dahmer, the acclaimed biopic of serial killer Jeffrey Dahmer, that turned our heads. Lynch’s performance drew universal critical praise and hinted that Lynch has a range beyond goofy comedy. Get this man a lightsaber.

The original Star Wars cast nailed their roles, but few left bigger shoes to step into than Carrie Fisher’s Leia. She’s forthright, proud, and frighteningly perceptive about everyone she meets, with the then-unknown Fisher just 18 at the time. Vivien Lyra Blair is doing a great job as the 10-year-old Leia on Obi-Wan Kenobi, but we can’t sit around for eight years waiting for her to grow into the Episode IV character.

Fortunately, we’re not short of very talented young actresses who’d be great in the part. Chilling Adventures of Sabrina and Mad Men star Kiernan Shipka could be in with a shot, though pairing her up with Ross Lynch again wouldn’t look great. Florence Pugh would also knock it out of the park, particularly after proving her action chops as Yelena in the MCU.

But really those are just afterthoughts, as the frontrunner is clearly Stranger Things and Enola Holmes‘ Millie Bobby Brown:

The 18-year-old made her name with Stranger Things as Eleven, is tipped as one of the finest actors of her generation, and demonstrated her big-screen potential in Legendary’s Monsterverse movies. But it’s Netflix’s Enola Holmes that shows why Brown would be a great Leia, showing the exact combination of fierce intelligence and regal snootiness that the character needs.

Harrison Ford was 35 in 1977, so we’re looking for an actor with easy charisma, sexiness, and a rogue-ish edge. This doesn’t exactly narrow things down in Hollywood, though we think Sebastian Stan, Chris Pine, or Tom Hardy would do a decent job. But they’re all way too obvious and we’d prefer someone that audiences aren’t overly familiar with yet to match Harrison Ford’s star-making turn.

Stanfield has been slowly building a name for himself with a series of killer supporting performances in great movies like Get Out, Knives Out, and Uncut Gems, but has proven to dominate the screen when given the opportunity. He’s why the brilliant Sorry to Bother You works as well as it does, has made waves in HBO’s Atlanta, and received an Academy Award for Judas and the Black Messiah. We love seeing him on screen — let’s get him behind the wheel of the Millennium Falcon.

Sorry, Alden Ehrenreich, you had your shot.

Ewan McGregor is currently killing it as an older, jaded Obi-Wan on Disney Plus, but it’s too easy an answer to neatly slot him into this new version. You need an older actor with gravitas, a sense of humor, and Shakespearian-level dramatic chops for the older Obi-Wan, who has to explain the Force, tease the existence of the Jedi Order, and provide a link to the tragic Skywalker family history.

For this choice, we took into account George Lucas’ original plans for Obi-Wan. With Star Wars heavily influenced by his love of Akira Kurosawa’s samurai epics, he pursued Toshiro Mifune for the part, though the poor reputation of cinematic science fiction meant he wasn’t interested. We’d love to see that samurai element brought back to the forefront, so meet Ken Watanabe as Obi-Wan Kenobi.

Watanabe is well-known for his samurai characters in Japan and had his breakthrough in the West as Lord Katsumoto Moritsugu in The Last Samurai. Since then he’s managed the rare task of success in both Japan and the West, combining prestige pictures with blockbusters like the Transformers movies and Legendary’s Godzilla movies. Watanabe would absolutely nail this and we can’t think of a better spin on Obi-Wan Kenobi.

Finding an old English character actor with a threatening demeanor and cut-glass accent isn’t particularly difficult, though there are few working today who can quite match the heights of Peter Cushing. Good candidates for this might be Gary Oldman, Ben Kingsley, Ralph Fiennes, or Jeremy Irons. But the first name that came to find was the best, let’s just get Game of Thrones‘ Tywin Lannister in.

Yup, not too much thinking needs to be done on this one. Charles Dance is such a good candidate to play an Imperial commander we’re genuinely surprised he didn’t appear in Disney’s sequel trilogy. An alternate pick would have been Richard E. Grant, though he’s already played a very similar role in The Rise of Skywalker.

Can we imagine Dance issuing the order to destroy a planet? Very, very easily.

It’s tempting to just get James Earl Jones back, rules of this article be damned. With some aid from AI tool Respeecher, the 91-year-old Jones is currently doing a fantastic job in Obi-Wan Kenobi as the Sith Lord. But we do need some new blood — and the only person we’re prepared to mention in the same breath as Jones is Emmy-winning voice-over actor Keith David.

David has contributed excellent narration for Ken Burns’ documentaries, as well as great performances in animated shows Rick & Morty, Archer, and Gargoyles. He’s also no slouch in live-action either, though we’d follow Lucas’ lead and put a very tall actor in the armor and leave the voice work to David in post-production.

We’ve got a very tall actor in mind, whose work ranges from a beloved animation reboot to co-starring in a rom-com with Amy Schumer: Imagine LeBron James as Vader. The NBA all-time great physicalizing a lightsaber battle with Watanabe would be positively show-stopping.

It’s perhaps inevitable that one day Disney and Lucasfilm will consider remaking the original trilogy, so if seeing new faces as these iconic characters bugs you then you may one day have to get used to it. Questions remain on who’d direct, what changes they might make to the story, and if some of the production design might have to be updated to fit a modern aesthetic, so maybe this actually becoming reality isn’t necessarily a great idea.

Even so, we think with this cast, an imaginary 2022 Star Wars would be a hit.