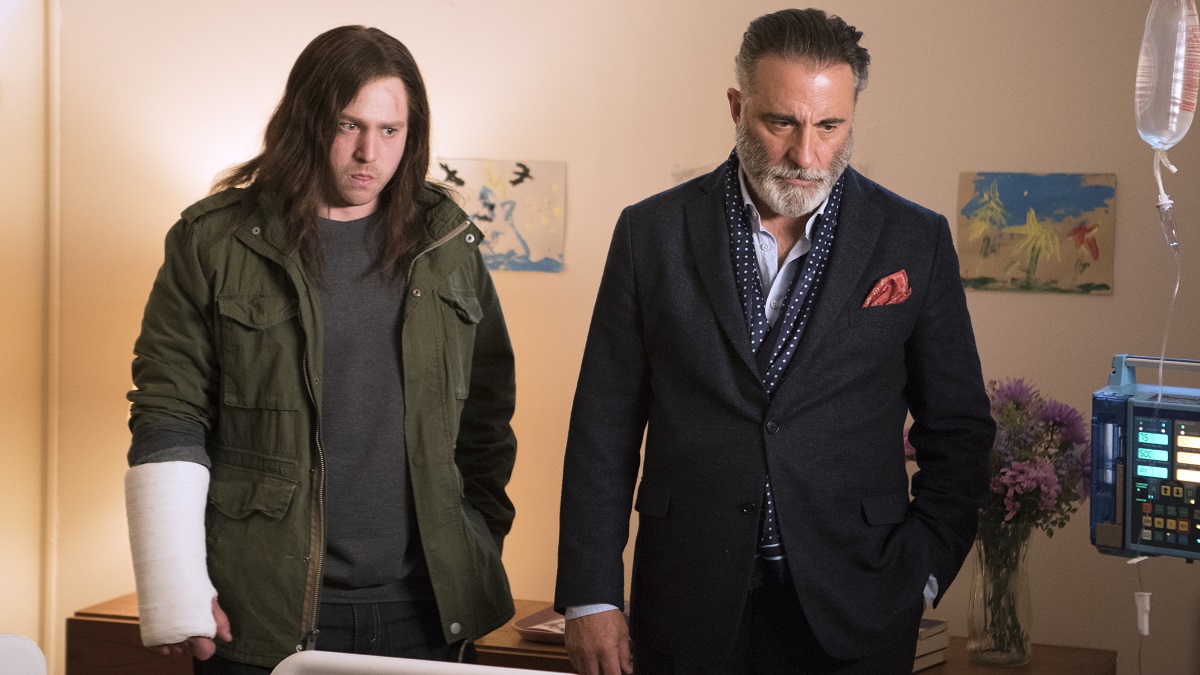 If you can get on the exact same wavelength as 'Big Gold Brick', then there's plenty to enjoy about writer/director Brian Petsos' distinctly unique and wholly original debut feature.

Trying to explain in detail what Big Gold Brick is actually about doesn’t do the movie much justice at all, with writer/director Brian Petsos marking his feature-length directorial debut by throwing absolutely everything at the wall without caring in the slightest as to whether or not it’ll stick.

As a result, the genre-bending piece is often an uneven mess of jumbled tonal styles, rapid gear shifts, and breakneck sprints through multiple genres (often in the space of a single scene). But, when it sings it isn’t anything less than the distinctly unique vision of a filmmaker who knows exactly what he wants, and how he wants to present it to an audience.

While you can’t help but admire Petsos’ desire to deliver such a singular presentation of his unbridled creativity, Big Gold Brick often becomes convoluted and overstuffed to the point of self-indulgence, and a more judicious edit to trim down the lengthy 132-minute running time would have yielded a tighter, more focused end product.

However, you only get to make your first feature once, so you can completely understand why he’s opted to forego any sense of restraint or desire to appease the mainstream. By the time the credits roll, you’ll have a very good idea of who Petsos is and what he’s all about, for better or worse.

Despite the star-studded ensemble gazing out from the various marketing materials, Emory Cohen’s Samuel Liston always remains the audience surrogate, and our point of view into the wacky world he finds himself drawn into. In the opening minutes, he’s struck by a car driven by Andy Garcia’s Floyd Deveraux, who ultimately takes the young man into his home to become part of the family, while also tasking him to act as his official biographer.

Naturally, there’s much more to the suave and charismatic Floyd than meets the eye, and we soon discover that almost every aspect of his everyday life is a million miles away from the construct he presents to the world, even those he deems as his nearest, dearest, and most trusted.

Samuel may be our way into Big Gold Brick, but he’s painted as an unreliable narrator from the outset, and as the story progresses, we continually find ourselves questioning just how loose his grip on reality has become. Petsos doesn’t go about toying with these expectations in a subtle manner, instead utilizing visual trickery and a dark vein of humor to deliver a string of segues that end up flirting with both the supernatural and fantastical, so it’s not as though we’re being led down blind alleys for the sake of a rug-pull; we’re let in on the ground floor.

In essence, Big Gold Brick could best be described as a series of skits tied together by Samuel’s narrative throughline, because the myriad of genre-bending detours into idiosyncratic territory never feel like they’re supposed to seamlessly join together, which may or may not be the point. Either way, there’s no instant gratification or hand-holding to take us through the weird and wonderful world, which can be a help or a hindrance depending on your personal taste and preference.

Luckily, Cohen and Garcia are both fantastic in their respective roles, no easy feat when they’re each required to juggle so many tics, foibles, and manic outbursts. In lesser hands, we could have easily ended up in full-blown hammy territory, and it’s no coincidence that the movie is strongest when the two leads are allowed to dominate the frame and bounce off each other.

Along the way we encounter Floyd’s distant-yet-flirtatious trophy wife played by Megan Fox, his almost certainly sociopathic son Eddie (Leonidas Castrounis), and his musical prodigy daughter Lily from his first marriage (Lucy Hale), all of whom are painted such broad strokes that none of them leave much of an impression when they’re not onscreen, and that’s barely even scratching the surface of the various cogs in the storytelling machine, but they do at least inform Samuel’s arc in a meaningful fashion, so their existences are all fully justified in context.

Diving too far into the minutiae of Big Gold Brick would be doing a disservice to a film that wants you to strap in, buckle up, and go along for the ride without knowing too much in the way of specifics beforehand. Suffice to say, it perfectly fits the off-kilter tone and intentionally ridiculous genre-hopping on display when Oscar Isaac shows up as a heavily-accented crime boss with a bad leg, an eye patch, and a penchant for automatic weaponry. Fortunately, his bizarre Anselm doesn’t appear until the third act, by which time viewers will have grown accustomed to the rhythmic insanity on display, so it’s nothing out of the ordinary.

That being said, Petsos swings for the fences so often that the misses come perilously close to outweighing the hits. At one stage or another, Big Gold Brick incorporates elements of black comedy, crime thriller, heist caper, family drama, and old school screwball slapstick, without mentioning the hallucinatory nightmares, fever dreams, splintered timelines, questions surrounding the validity of the events being recounted from present to past, and a whole lot more that we’re being bombarded with from beginning to end.

If that sounds exhausting, that’s because it absolutely is, and a lot of people aren’t going to enjoy Big Gold Brick at all. Then again, it’s also very easy to imagine Petsos’ undeniably ambitious and frustratingly unwieldy effort becoming an instant cult classic and perennial favorite among the midnight madness crowd.

It’s either a compliment or a criticism to say that you need to be on the exact same wavelength as Big Gold Brick to get a kick out of it, because if you turn the dial even the tiniest little bit in either direction, all you’re going to end up with is static. If you’re on board, though, then there’s plenty to enjoy about an offbeat adventure that’s unlike anything else you’re likely to see this year.

If you can get on the exact same wavelength as 'Big Gold Brick', then there's plenty to enjoy about writer/director Brian Petsos' distinctly unique and wholly original debut feature.