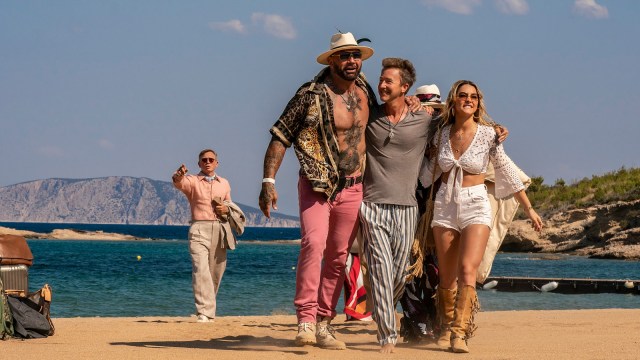 If anyone deserves to celebrate their hearts out nowadays, it’s Rian Johnson and the rest of the Glass Onion crew. After Knives Out blew audiences away just three years earlier, the follow-up is finally available to the public, and Daniel Craig’s second turn as serial investigator Benoit Blanc dares to lay claim to being even better than the first.

But the team must have known this long in advance, since the celebrations started long before the movie was finished.

In a recent tweet, Johnson, the writing, directing, and one half of the production mastermind behind the film, recalled having alcohol-fueled dance parties on the roof of the team’s Belgrade hotel after their work for the day had wrapped up. And apparently, the above photo is the only surviving clue that such parties ever took place.

It’s no easy task to make out the folks involved in the photo, but the two figures in the background look to be Edward Norton and Leslie Odom Jr., while the dance-happy figure taking up the foreground is a mystery that we may need Blanc himself to figure out.

Some responders were convinced that Johnson was sabotaging the investigation by withholding more evidence.

Others simply took the opportunity to pat Johnson on the back for delivering another riveting murder mystery.

One thing’s for sure; we hope that Glass Onion is as unforgettable an experience as these cast parties seemed to be (we assume they are, given the lackluster photo evidence), and for those of you looking for the big screen version of that experience, the film will continue to play in theaters until Nov. 29 before debuting on Netflix on Dec. 23.