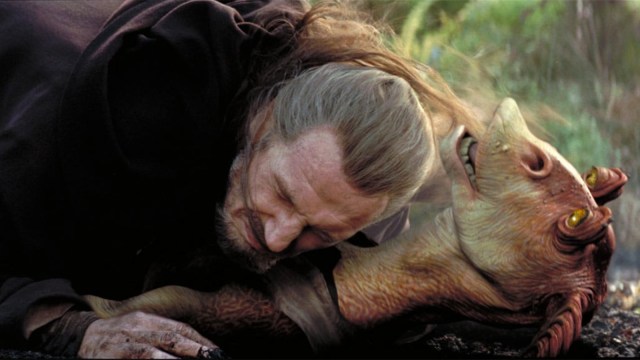 The Star Wars prequel trilogy caused a lot of controversy in the late 1990s when it was first released to theaters, with some lamenting the elimination of the mysticism of the Force with an explanation that it was a result of a substance in the blood called “midochloridians” that could be inherited, while others hated the preschool slapstick antics of Jar Jar Binks.

Still, others looked at the notoriously stiff acting of all actors portraying Anakin Skywalker and found the romance scenes between him and Natalie Portman’s Princess Amadala both laughable and creepy, in that she met him when he was a child in The Phantom Menace and then were somehow both the same age in Attack of the Clones.

Still, others found that George Lucas threw over everything they loved about the original trilogy in favor of merchandising-friendly sets and podcast-racing sequences. Most likely due to Lucasfilm’s decision to delay working on the new prequel trilogy, partly on the decision to wait until the studio’s original deal with Hasbro had finally expired.

But one member of the popular internet bulletin board Reddit has a theory about what made the Prequel Trilogy so terrible, and they chose to blame the world-building:

And there’s certainly something to be said for that. The original Star Wars trilogy created a universe so vast and lived-in that audiences were forced to go home and fill in the massive blanks in story and character with their own imaginations. The Prequel Trilogy set about to fill in those blanks by explaining every character, planet, and motivation in unnecessary detail.