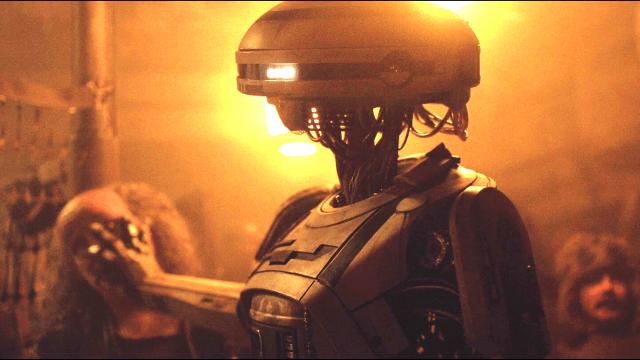 One of the most contentious philosophical questions in Star Wars is whether droids are sentient beings or not. It feels difficult to argue that, for example, C-3PO isn’t a person with thoughts and feelings, but what about Gonk droids or bog-standard B1-series battle droids as seen in the prequels?

Follow this train of thought too far, and you end up in sticky moral territory, as it means the heroic Luke Skywalker is introduced participating in what’s essentially a slave auction when Uncle Owen buys droids from the Jawas.

Someone at Lucasfilm was clearly paying attention to the debate when writing Solo: A Star Wars Story, as Phoebe Waller-Bridge’s L3 was a droids rights activist, going on to engineer a slave rebellion on Kessel. Sadly, L3 is fatally damaged in the process. Lando subsequently salvages what he can by integrating L3’s ‘Memory Module’ with the Millennium Falcon’s onboard computer.

A fan on r/StarWars has dubbed this “a hellish nightmare” for L3 as it makes her “a silent slave for literally eternity” — the embodiment of everything she spent her life fighting against.

Fans point out a short story in the collection From a Certain Point of View: The Empire Strikes Back indicates that L3 isn’t necessarily silent as she’s able to converse with the other systems on board the Falcon and any droids that interface with the ship. It’s noted that C-3PO becomes annoyed that R2-D2 gets along so well with the Falcon’s computers, to the point that they’re swapping dirty jokes with one another.

Despite this, it’s disappointing that L3’s droid activism is treated more like a punchline or quirky character trait than something Solo actually wants to explore. Another fan says that droids in Star Wars have to be three contradictory things at once: sentient people, personal property, and comic relief. That’s a difficult square to circle, so maybe it’s for the best that Star Wars doesn’t spend too much time thinking about it.

Even so, we can’t deny that L3’s fate really does sound like a living nightmare.