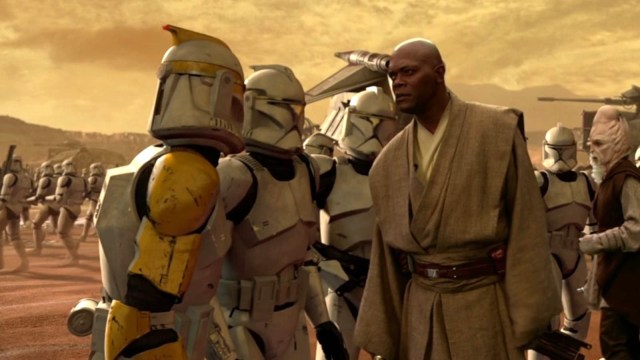 A Reddit post has made Star Wars fans question why the Jedi did not question the mysterious Clone Army.

The clones were first introduced in Star Wars: Episode II – Attack of the Clones, uncovered by Obi-Wan Kenobi on Kamino. Yoda then brought the clones to the Battle of Geonosis to save the Jedi fighting the Separatist forces. Fans are now bringing attention to the suspicious nature of their creation, that they were clones of the bounty hunter Jango Fett.

One fan writes “It was mostly out of necessity, with the droid army being created and ready for war. But the Jango part always bothered me as well, like how do you not get suspicious of that?” The irony here is that the very bounty hunter who they should be suspicious of was beheaded by Mace Windu in that same battle.

There were some Jedi who were suspicious of the clones, but not because they were meant to be peacekeepers. One Jedi who was introduced in Star Wars: The Clone Wars, Pong Krell, famously hated the clone troopers. Another Redditor writes “And not all Jedi were so on board with the Clones, most infamously General F*ck Pong Krell.”

In The Clone Wars Krell pitted two full regiments of clones against each other, the 501st Legion and the 212th Attack Battalion. Covered by darkness and stealth the clones went to war against each other and before they realized that they were brothers, many died.

The Reddit thread does seem to come to a consensus that – at least for the time being – the Jedi needed the clones. But it does not stop the situation from being weird because of Jango Fett. Why would the Jedi trust an army so quickly, when it was clearly made from someone working for the Separatists? One fan thinks that it might be because the clones were ordered by a Jedi, with “I think the fact that they were ordered by Sifo Dias also made them trust them too.”

But even though they were ordered by a Jedi, Obi-Wan knew that the death of Sifo-Dyas and the ordering of the clones were suspicious, to say the least. One Redditor points out how many suspicious details surrounded the creation of the clones, including the involvement of Sifo-Dyas; “There were so many red flags. Sifo Dyas himself died under mysterious circumstances around the same time as the Trade Federation invasion of Naboo. This coincided with Dooku leaving the order.”

After that, it does seem quite odd that other than a couple of the Jedi, nobody thought the situation was as suspicious as it comes across in hindsight. When you have the head of the Separatists leaving the Jedi Order while another Jedi dies suspiciously, you would think there would be a deep investigation of the events. If only some of the Jedi had connected the dots sooner, they might have prevented Order 66.