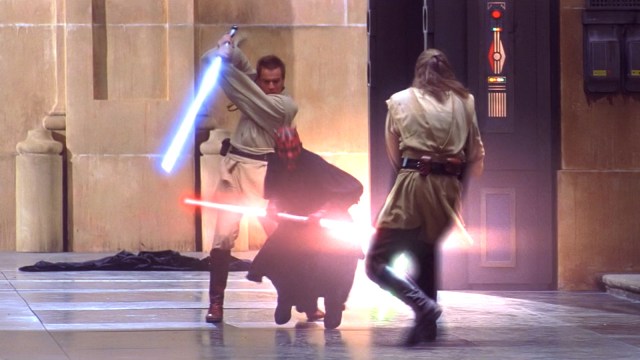 For 45 years and counting, the lightsaber has reigned as one of the most iconic, popular, coolest, and all-round badass weapons in pop culture, with Star Wars fans of all ages and generations continuing to get giddy any time they hear the instantly-recognizable sound of the blade being fired up.

Almost every project set in a galaxy far, far away is obligated to feature a lightsaber battle of some kind, and that’s even extended to The Mandalorian via the introduction of the Darksaber, which should overcompensate for the lack of Jedi in season 3 if Rosario Dawson’s Ahsoka Tano or Mark Hamill’s Luke Skywalker end up sitting out the next run of episodes.

As a result, trying to determine the franchise’s best-ever battle between good and evil has proven a tough nut to crack, and things have been getting very heated over on Reddit as old and new Star Wars enthusiasts alike try to whittle down the competition in an effort to determine a winner.

The top-rated reply pinpoints the showdown between Luke and Darth Vader in Return of the Jedi, which may not be the splashiest or most action-packed lightsaber duel we’ve ever seen, but it may well be the most important from a storytelling and thematic perspective.

Duel of the Fates inevitably gets thrown up more than once, while Obi-Wan Kenobi‘s climactic scrap between the hero’s former Padawan and his Master is receiving plenty of praise. It’s almost an unanswerable question, but we can guarantee more contenders will be added to the conversation with each new project.