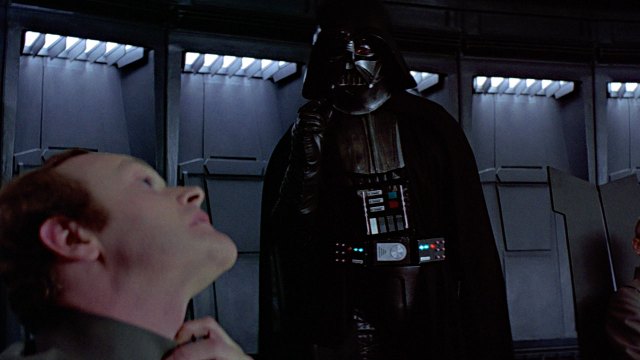 There’s a thin line between stupidity and courage, but more than forty years since the premiere of the first Star Wars movie, the fandom of the galaxy far, far away can’t decide if this particular character is stupidly bold or boldly stupid.

When A New Hope originally came out in 1977, our perception of the living Force was still narrow. In a science-fiction world dominated by spaceships and other technological marvels, the power of telekinesis felt rather non-consequential, until Darth Vader let the Imperial admirals and the audiences know that such estimation couldn’t be any further from the truth.

When discussing the power of the Death Star — a weapon of mass destruction that the Empire spent 20 years building — Vader casually dismisses it as being insignificant next to the power of the Force. One of the attending officers, an admiral named Motti and played by Richard LeParmentier, shrugs it off as hogwash, saying, “Don’t try to frighten us with your sorcerers’ ways, Lord Vader. Your sad devotion to that ancient religion has not helped you conjure up the stolen data tapes,” at which point, Vader, naturally, Force chokes the poor guy until Tarkin asks him to let it go.

Now, Star Wars fans are coming together in appreciation of Motti, who had the testicular fortitude, for lack of a better word, to openly defy the Emperor’s second-in-command.

Apparently, even LeParmentier bragged about being Force-choked by Vader at one point.

There’s just no other way to put it; the guy was playing with fire. If Tarkin hadn’t intervened, he’d probably have joined the long list of Imperial officers whom Vader has choked to death over the years.

Rest in peace, Motti, the only bad guy to ever stand up to Vader.