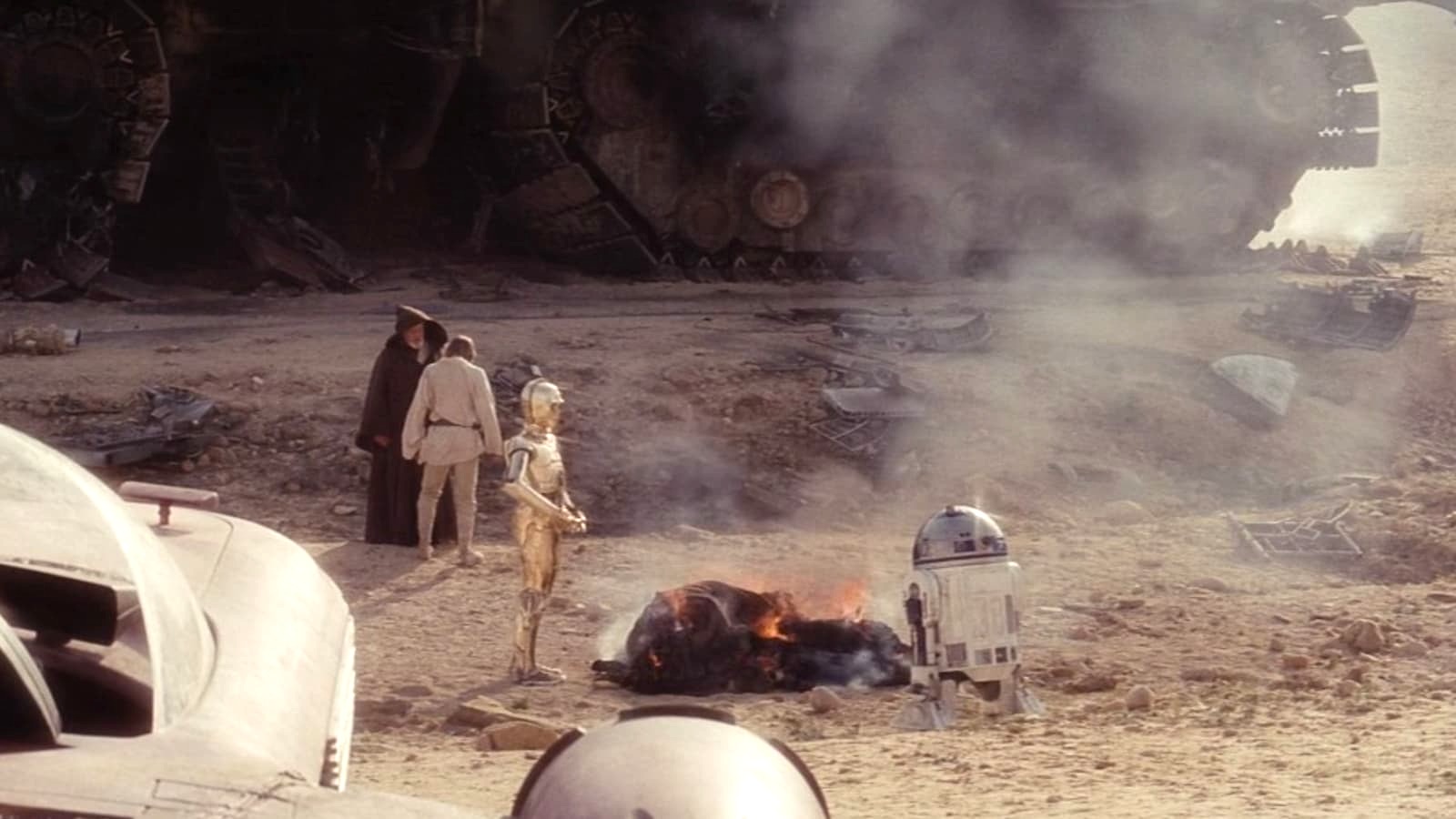 Some Star Wars fans have realized how comfortable R2-D2 and C-3PO are with burning the Jawas on Tatooine in Star Wars: Episode IV – A New Hope.

Before Luke Skywalker and Obi-Wan Kenobi join Han Solo on the Millenium Falcon, the group burn a bunch of Jawas in a bonfire. Some Redditors have pointed out that R2-D2 and C-3PO just stood idly by, while the Jawas burned away. Most of the Reddit comments are joking about R2-D2 claiming that he’s seen much worse, with one Redditor saying, “That’s Tuesday for R2.”

It’s not clear what Tuesdays have to do with R2-D2 and his supposed penchant for arson, but Redditors continued to point to R2-D2’s nefarious actions, not that it could ever be proven. One fan went so far as to allege that R2-D2 was arranging some sort of blackmail conspiracy, “R2 knows exactly what he’s doing. R2 knows Ben, R2 knows who Luke is, what the Force is, and the true identity of Darth Vader. R2 says nothing… we are all pawns in his game.”

Another Redditor commented something along the same lines, “Just protocol for 3PO. R2 on the other hand has buried a few himself that no one knows about I’m sure of it.”

As a Protocol Droid, C-3PO would just have to do what he was told, so it was not as if he would risk his metal shell to save the Jawas from burning to a crisp. One Redditor even goes as far as to say that C-3PO might have been a little discriminatory against the Tatooine locals, “C-3PO says just a few scenes later: ‘I can’t abide these Jawas. Disgusting creatures.’”

One Redditor wasted no time in mentioning that the pair of droids were essentially veterans, who had lived through Order 66 and the Clone Wars, and seen their fair share of the action, “They were around during clone wars what’s a few charred bodies.”

Obi-Wan was likely the person who started the fire, and possibly did it because he resided on Tatooine longer than anyone else. We also see Kenobi interact with a Jawa in Obi-Wan Kenobi so it’s likely that Obi-Wan burned them as a sign of respect rather than as a sign of hatred. Maybe during his interactions with the Jawas, the subject of burial rites came up over a glass of blue milk?

But try watching A New Hope again without the thought of both R2-D2 and C-3PO just standing there, watching over the Jawas’ bodies, and remembering their battles in the Clone Wars through the flames.