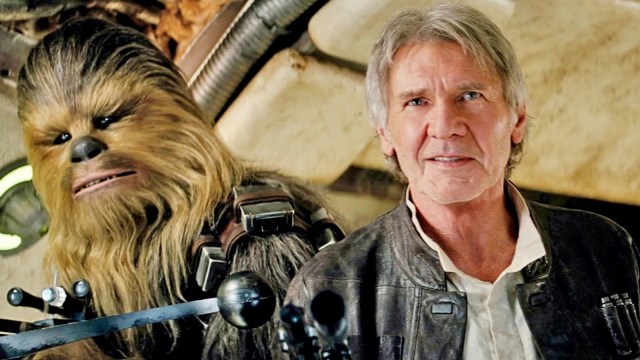 Something kinda spooky is going on in the Star Wars fandom right now, as it seems some people are remembering a key line in The Force Awakens differently from everyone else. Is the Mandela Effect afoot in a galaxy far, far away?

This notorious phenomenon is when large groups of otherwise unconnected people share the same false memory, with it named for many people wrongly remembering Nelson Mandela dying in the 1980s, or that the children’s book series The Berenstain Bears was actually titled The Berenstein Bears.

Now, a fan is wondering why they have a clear memory of a line from Han Solo in The Force Awakens that doesn’t exist in the Disney Plus version:

We have a vague memory of this, too, as it certainly sounds like something that Han would say. One user thinks this might have been a line from a promo, perhaps from an alternate take of this scene:

One user distinctly remembers this version of the line, saying that they “quote it often”, and another theorizes that this might be a weird example of Disney censorship.

But more attentive fans are here to set the score straight, concluding that this is a false memory conflating two separate things:

A reply may have even pinpointed where the line comes from, pointing to a 2015 Esurance ad:

This ad would have been airing at the time of The Force Awakens‘ release, so it makes sense that the two lines became jumbled up in some people’s memories. But, with Disney having a reputation for making unannounced and subtle changes to movies on streaming, maybe it’s not surprising that some viewers are watching their movies and getting suspicious that something is different.