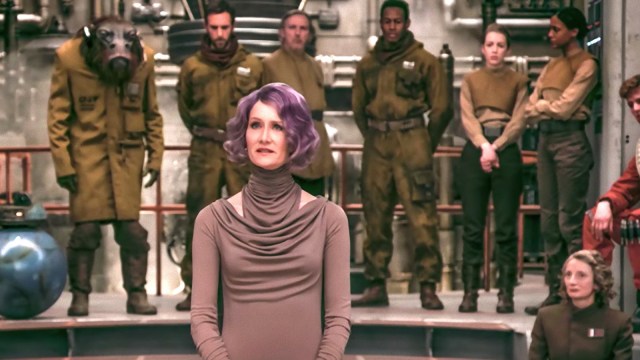 It’s been five years since Star Wars: The Last Jedi, and many fans just can’t let go. Somewhere on the internet, there will always be fevered debate on Rian Johnson’s take on Luke Skywalker or his attempt to “democratize” the Force. However, there’s one scene in particular that drives fans of tactical realism in interstellar space combat nuts.

This is, of course, the notorious Holdo Maneuver. Faced with insurmountable odds and the need to save what’s left of the Resistance, Laura Dern’s Admiral Holdo tries something we’ve never seen in Star Wars before. She turns her cruiser around, fires up her hyperspace drive, and executes a kamikaze strike on the First Order fleet.

Leaving aside the quibbles over whether it’s plausible for Star Wars, it’s a jaw-droppingly cool moment and you could have heard a pin drop in theaters on opening night. And yet, fans on r/StarWars are still trading blows over whether it “breaks” the universe.

The common argument is that this is such an effective tactic we should be seeing it deployed in multiple battles, perhaps in the form of strapping hyperspace drives to asteroids and firing them at the enemy, even if there are a lot of people who defend the move and explain why it’s a one-off.

First up, in The Rise of Skywalker, it’s confirmed that this was a “one in a million” shot that’s almost impossible to recreate. That’s because the window of acceleration between realspace and hyperspace is so slim, that timing a Holdo maneuver is ultimately reliant on the will of the Force.

On top of that, it’s repeatedly pointed out that sacrificing capital ships in suicide strikes doesn’t make economic sense, and is only something you’d do as a last resort. Also, you need someone willing to kill themselves to do it, and the argument you could just use a droid doesn’t make sense as they’re clearly sentient, too.

That being said, it’s more difficult to refute the argument that the Holdo maneuver makes large bases like the Death Star vulnerable, though we suppose the trouble there is getting a large ship close enough to it so you hit the sweet spot as you accelerate.

Leaving all that aside, it was an incredibly cool moment in Star Wars, and even if it doesn’t strictly make sense we’re glad they included it. But now that the genie is out of the bottle, maybe we’ll see it used again sometime.