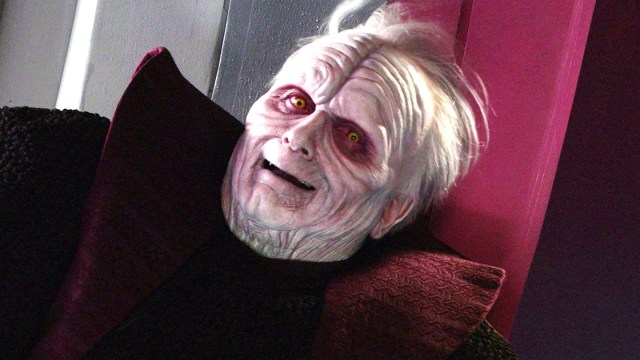 The Star Wars universe is fortunate that most Sith Lords burn out fairly quickly. The physical strain of devoting yourself to the Dark Side warps your body into something monstrous, and trying to dominate the galaxy in a black cloak with a red lightsaber (scary mask optional) paints a big target on your back for any budding Luke Skywalkers out there. On top of that, the Sith “Rule of Two” means there’s always an ambitious apprentice waiting for you to slip up so they can seize the throne for themselves.

All of which makes it interesting that Darth Sidious dodged those bullets for a very long time (and even after being thrown into a reactor shaft, still managed to mount a comeback).

Despite devoting himself to the Dark Side for decades, by the time of Revenge of the Sith, Palpatine still looked like a normal old dude until Mace Windu scarred him. Not only that, but up until Vader, he’d survived a huge amount of apprentices and ambitious Dark Jedi working under him.

So, was Palpatine just using the Sith ideology for his own ends?

Other fans say Sidious is “the perfect Sith”:

“Darth Sidious was the perfect Sith Lord, the one that achieved the ultimate goals of the Sith: ruling the (known) galaxy and becoming immortal. Like his predecessors, he was so full of himself that he trained his apprentices as “servants”, “tools” or “pawns” and not as “successors”. The only difference was that he was able to maintain his power and thus didn’t need anyone to succeed him to keep the Sith lineage alive. When, in one of the Sequels, he said “I am all of the Sith” I understood it as “I am everything a Sith could ever become” – kind of like “I am the Senate”.

It’s also pointed out that Sidious can effectively decide what the Sith ideology is:

Others note that in the Disney era, we actually don’t have much canonical information about what being a Sith entails:

The whole thing is that Sith set the rules rather than follow them, and Sidious certainly did that:

It’s often been said that the longer you spend reading about how previous Sith Lords screwed up, observe the Jedi Order as an emotionally stunted cult that kidnapped children, and see that the Galactic Senate was corrupt and inert, you start thinking that maybe, just maybe, Darth Sidious kind of had a point.

Though, uh, we have some problems with the whole genocidal fascist Empire thing.