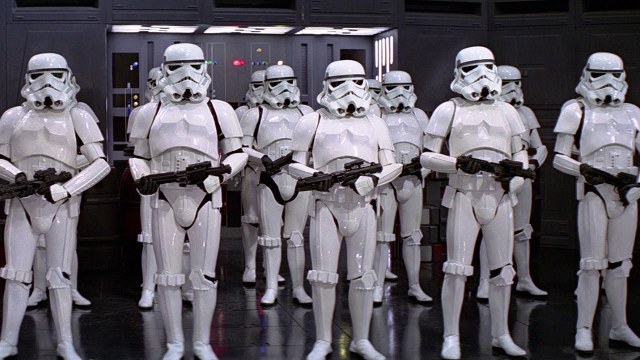 Star Wars lore is so varied and expansive that it’s bound to create some misunderstandings among viewers — and possibly even among writers!

Fans in the Star Wars subreddit are focusing on themselves, though, as they’re choosing “the most frustrating thing in Star Wars people get wrong often,” the first of which is “that people often think the Empire’s Stormtroopers are all clones in OT [original trilogy].”

This one is understandable, especially if you watched the prequels first, considering that they depict the creation of the Clone Army that became the Stormtroopers. However, the Stormtroopers were only modeled after the Clones, and are thus unique human beings.

Another Redditor cited the Stormtrooper example while also mentioning the misconception that everyone in the galaxy knows Darth Vader (it’s a BIG galaxy), and that Jedi function like warriors (they’re more like monks who are supposed to fight only to protect themselves or others).

More misunderstandings include that Yoda uses Force lightning (it may appear that way in his duel with Count Dooku); that Force ghosts are like gods (they can alter things subtly, but they’re not omnipotent or omniscient); and that a balance in the Force does means an equal share of Sith and Jedi (Sith always unbalance the Force).

User lkn240 picked a misunderstanding that involves the creation of Star Wars rather than the lore:

A lot of people fell for that one!

Do you know of another common Star Wars misunderstanding? You can add it to the discussion here.