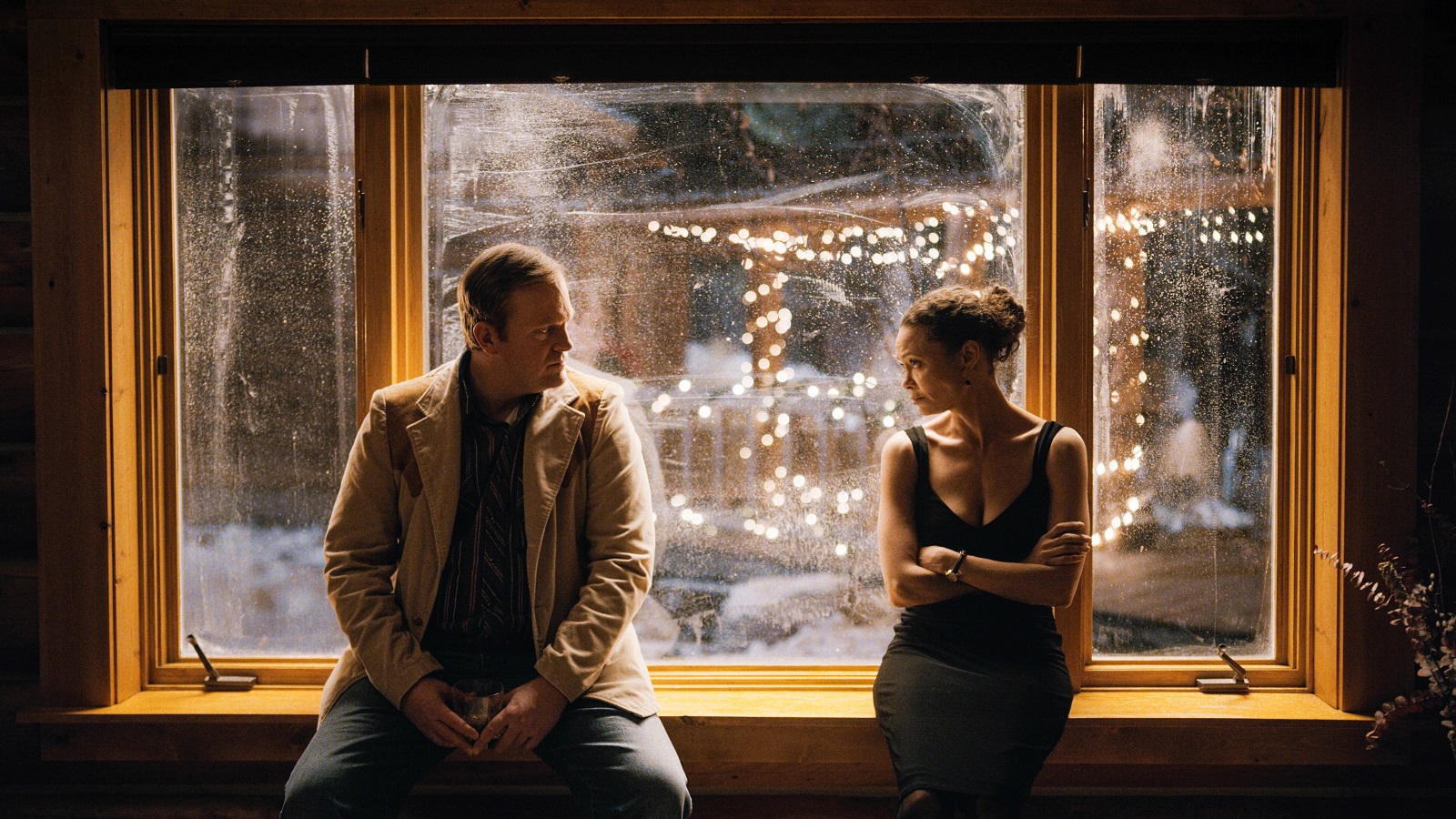 In God’s Country, director Julian Higgins has gifted actor Thandiwe Newton a role of rare intensity, in this slow burn melodrama of escalating miscommunication. Set in the frozen wastes of Montana, where isolated homesteads and overbearing mountain ranges dominate a barren landscape, relationships are precious things. As Sandra Guidry, audiences are introduced to Newton in the aftermath of her mother’s funeral, dealing with unpleasant formalities.

In taking this approach, Higgins establishes tone, hints at character, and offers up an indication of the strength she quietly harbors within. Living alone with nothing but her dog for company, Newton works hard to maintain momentum, either sorting through belongings or interacting occasionally with colleagues at work. In the main, there are few external indications of grief in those early stages, as she uses routine and structure to stave off any outward signs of emotional turmoil. It is only with the arrival of an unwelcome red pick-up truck, illegally parked on her land, that Sandra is able to begin channeling her loss elsewhere.

From that point on, God’s Country is propelled along by an unspoken escalation of events. What starts out as a kind note and request to move on turns into an overblown vendetta culminating in a visceral reaction. Unwarranted words, local mistrust and an alliance with local law enforcement does little to calm things down, as Jeremy Bobb’s Gus Wolf sides with her. As a diversionary tactic that brings in an unnecessary love interest, his arrival only offers audiences another means of connection, rather than moving events forward.

Her attempts to reason with the hunters Nathan and Samuel Cody, inevitably fall on deaf ears, as an inherent prejudice borne of fear puts pay to a peaceful resolution. However, rather than bowing under and staying within the confines of acceptable behavior, Sandra escalates her actions in response to every retaliation. As a result, what starts simply enough, turns into an orchestrated act of spite, that culminates in a cathartic outpouring of anger.

By turning the tables on her would-be assailants, God’s Country quickly morphs into an empowerment thriller headed up by a low-key antagonist. Her choice to take the fight to their home turf changes the game, as Joris Jarsky’s Nathan is caught off guard with his elderly mother. This humbling experience undermines his masculinity, revealing a man defined by more than mere gender stereotypes. On the flip side, Jefferson White embraces the animalistic tendencies of a dominant male in his confrontation with Sandra, as his implication of physical violation seals his fate.

Higgins does attempt to bring in some sub-plots around gender politics in institutional workplaces, but ultimately this feels like filler. Tanaya Beatty’s Gretchen figures strongly in this distraction, allowing Newton’s Sandra to tub thump on the inherent inequalities, but it never really gains enough traction outside of the central narrative. Unfortunately, that means other characters remain undeveloped, as almost everything else gets overshadowed by the ongoing feud.

In many respects, the endgame repercussions which began from a disagreement will speak to audiences everywhere who have been dealing with their own issues of isolation. As people have been forced to spend extended periods away from loved ones, often in less-than-ideal circumstances, God’s Country is certain to hit home hard.

Over the last two years, shifting cultural landscapes have made people more sensitive to personal space. Ideas of what is acceptable in terms of making connections, maintaining friendships, and respecting individuals has become even more paramount in every facet of life. God’s Country taps into that mindset seamlessly, where distance from others has become a daily requirement, only to be disregarded in extreme circumstances.

For some, the conclusion of God’s Country might seem overblown and a touch sensationalist, but there is no denying that a change has occurred. Sandra has evolved by confronting her grief and purging her anger, but will be left with some difficult choices going forward. Where that leaves the audience in those final minutes is another question, as there are no easy answers. Whether she is no better than the men she sought to confront is open to debate, but looking out at that landscape in the aftermath of her actions, things could go either way.