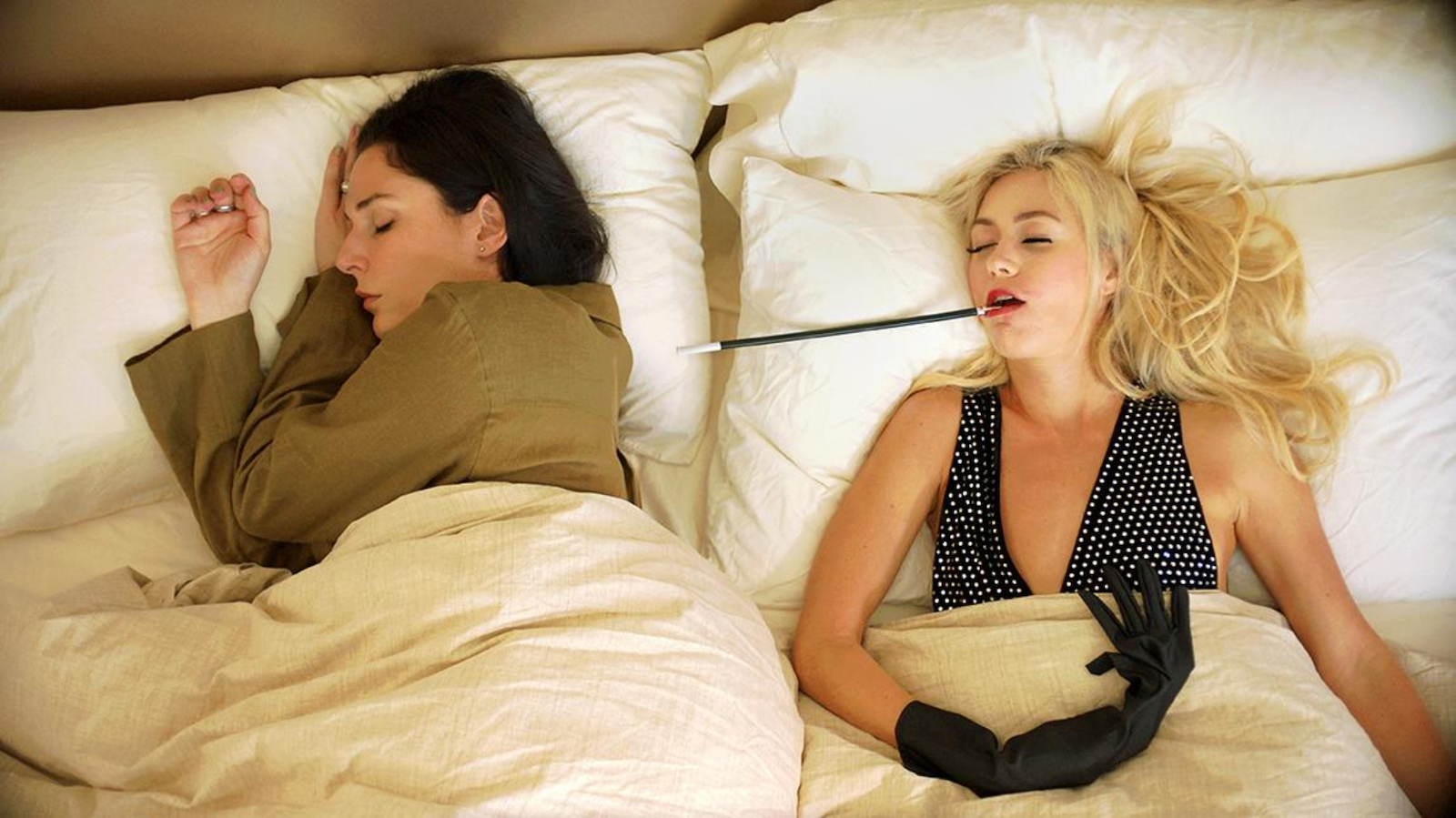 Image by Alyssa Brocato
Review of:

Pretty Problems from director Kestrin Pantera comes on like a social satire and drifts into the realms of relationship drama before morphing into a veiled swipe at uber affluence. Screenwriter Michael Tennant, who also doubles on screen as Jack opposite Britt Rentschler’s Lindsay, aims to unsettle audiences from the off. Opening in close-up on a couple mid-coitus, this brazen melodrama makes its intentions clear by pulling no punches. In a concise piece of screenwriting, which is all show and no tell, tone and intention are set on split-screen, as each one finds more satisfaction by themselves than with each other.

Outside of this isolated piece of pleasure, Tennant is quick to establish their relationship through dialogue by shaping Jack and Lindsay through pithy exchanges that swiftly define their dynamic. Audiences are introduced to Lindsay’s place of work, where she first encounters J.J Nolan’s Cat Flax. In terms of story, this is a pivotal meeting, as coincidence and natural chemistry sell their lightning-quick connection and subsequent bonding over white wine. In terms of writing, Tennant is even-handed when distributing top drawer dialogue, as Nolan makes quite an impression and kicks Pretty Problems up another notch in the process.

By selling implausible friendships and affluent stereotypes to audiences so well in those first fifteen minutes, the film gets much of the heavy lifting out of the way. At that point, when Lindsay and Jack get invited to a sun-baked retreat for the weekend, these characters are strong enough that anyone watching will come along for the ride. That allows Tennant to take it into full-blown satire with an acid-based edge when they roll up to this exclusive utopia and meet Cat’s husband, Matt.

As her husband, Graham Outerbridge is chiseled and tanned but disarmingly down to earth. Alongside Matt is the equally affable Alex Klein as best friend Kerry, a similarly blessed upper-class manchild. Charlotte Ubben’s Carrie is his perpetually passed-out partner in crime. Then, of course, there are those who share the property during this off-kilter weekend who are solely around to serve. However, in their subservient roles as employed observers, Clayton Froning’s Dan and Amy Maghera’s Georgina bring a surprise or two of their own along for the ride. Still, from amongst this ensemble of assembled talent, Rentschler and Tennant deserve a tad more recognition than most.

Their relationship malaise maintains a perfect counterpoint to the seemingly idyllic existence of everyone else. Only Nolan’s Cat Flax strives for poignancy in the dramatic scenes she is afforded, while Outerbridge only gets to imply depth during one single scene poolside with her husband, Matt.

In a lot of ways, Pretty Problems feels like a less venomous version of Neil LaBute’s 1998 film Your Friends and Neighbours. A movie that dug a lot deeper into relationship dysfunction whilst passing comments on matters of class and status along the way. A trick this pitch-black relationship drama attempts to deliver before bailing out and resorting to narrative conventions.

Everything else is eloquently constructed and flawlessly written, while this cast is uniformly excellent throughout. However, balancing the various elements of escalating farce and deeper social commentary leave Tennant nowhere to go with these characters once all the revelations and recriminations are unveiled.

Many of these twists will be obvious to anyone who has seen this type of film before, but at least with Pretty Problems, they feel fresh. That it also manages to combine an effective original score from Matt Friedman, alongside some contemporary song choices, also proves to aid and abet this drama in its satirical intentions. Only in the final ten minutes does director Kestrin Pantera feel the need to embrace formula, diminishing the impact of a movie that had been delivering up until that point.

Those minor gripes aside, Pretty Problems still has plenty to recommend to audiences looking for an alternative movie experience. This is no rehashed reboot looking for a nostalgic cash-in, but a film with something to discuss. It might not hit all the targets head-on when it comes to satire or social commentary but still remains subtly incisive and hugely entertaining.