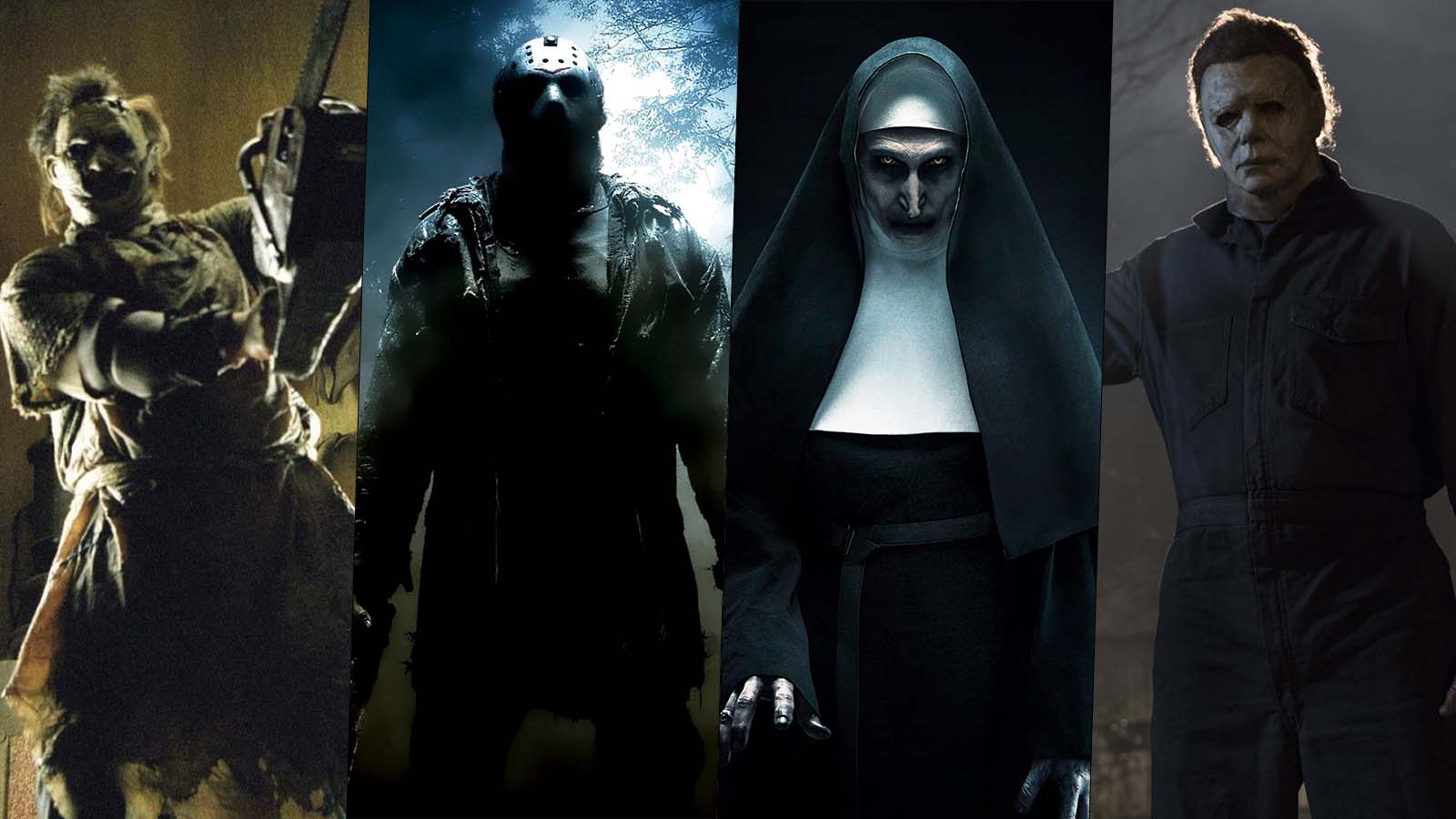 The history of the horror genre is filled with classic tropes and elements that have established a multitude of villains over the decades. From terrifying appearances to a slew of unsuspecting victims, there are plenty of elements that make horror villains as scary as they truly are. One of these elements is an intimidating voice that sends chills down the spines of audiences all around the world. However, some villains prefer to take a “silent but deadly” approach to their antics.

While villains like Freddy Krueger and Ghostface are known for their snappy one-liners and rely on scaring their victims with their unsettling speeches, there are several killers in the iconic horror genre that don’t have the luxury of using their voice to terrify others. Instead, these villains utilize their brute strength and intimidating physiques to stalk, threaten, and eventually kill their victims.

Without further ado, here are the very best horror villains who don’t speak a single word.

10. The Entity from It Follows

It Follows has established itself as one of the most underrated horror gems of the last decade. Part of the reason why is due to the fact that its villain is both incredibly ominous and mysterious, seeing as “it” can shapeshift into many different people. In simpler terms, the Entity disguises itself as a normal, everyday person, which is actually what makes it so frightening. The Entity represents a virus that is passed through sexual intercourse, and once it is passed to you, it will then attempt to kill you.

As a result, the Entity is one of the best horror villains seeing as it never utters a single word during the movie. Instead, its unpredictable emergence keeps its victims on their toes.

9. Man in Mask from The Strangers

The Strangers absolutely terrified audiences with its theatrical release back in 2008 and has since obtained a strong cult following. The film centers around a couple who are staying in a remote vacation home for the night after a wedding reception. During the night, the couple is eventually forced to defend themselves when a trio of masked villains invade the home. One of these villains is simply known as Man in Mask, and as terrifying as he looks, he’s even more frightening considering he doesn’t say a single word the entire movie.

Man in Mask is very different compared to his female counterparts, seeing as the two of them do talk. However, his presence is much scarier since he commits a vengeful crime without ever giving the couple a reasonable explanation. As such, he’s one of the best silent villains.

Trick ‘r Treat is one of those horror movies that is a guilty pleasure and undoubtedly a classic to watch during Halloween time. The movie follows a timeline of separate Halloween stories that eventually intertwine with a common denominator in Sam, a childlike, pumpkin-headed villain who goes trick-or-treating while wearing a burlap sack. While Sam may appear cute and cuddly, his tactics prove to be deadly whenever he feels someone has trashed the typical Halloween traditions. Despite Sam’s vengeful tactics, he never actually speaks throughout the duration of the spooky film.

Sam has proven to become one of horror’s most intriguing villains, and the fact that he never speaks makes him that much more interesting. We’ll never truly know why he loves Halloween so much that he’ll kill people who disrespect it, but it’s definitely entertaining.

Scott Derrickson’s Sinister perplexed viewers with its refreshing plot and deranged villain known as Bughuul. Bughuul is referenced many times in Sinister and its sequel as the Eater of Children, where he would consume a child’s soul after persuading them to kill the rest of their family on videotape. Bughuul is revealed to be an ancient pagan deity with nightmarish features, though perhaps the scariest part about him is that he never speaks a single word. Instead, he manipulates and persuades these children into committing unspeakable crimes.

It is explained that Bughuul’s mouth was sewn shut by his enraged brother, so while Bughuul probably could speak if he had the chance, his presence is only more intimidating and frightening due to the fact that he remains silent. Thus, he’s one of the best horror villains without a word of dialogue.

6. Valak from The Nun

The Conjuring universe is made up of various bone-chilling horror villains, and The Nun’s Valek is certainly one of the most unsettling. While a prior horror demon like Pazuzu (The Exorcist) is notorious for taunting victims with insults, Valak is much more reserved when it comes to remaining silent in its methodical approach. Valak is a forceful demon that exercises its manipulation tactics and possession abilities to wreak havoc on a church in Romania.

With talks of a sequel in the works, horror fans certainly have yet to see the last of Valak and the demon’s silent but extremely deadly actions. As a result, Valak fits right in this list as one of the best horror villains that never speaks.

What Horror Movies Are On HBOMax?
1 of 21

5. The Creeper from Jeepers Creepers

The Jeepers Creepers franchise remains one of the most well-known horror franchises in the history of the genre, and it certainly boasts one of the most terrifying villains. The Creeper is a winged demonic creature that feeds on people every 23 years. While The Creeper certainly opens his mouth to feast on unsuspecting victims, he never actually talks. Rather, he relies on terrifying his prey with his loud truck, impersonation of others, and disgusting appearance.

While he never physically speaks in any of the three films, the Creeper does speak in a deleted scene from the first film, though it was scrapped in post-production. Therefore, he is solidified as one of the best silent horror villains and definitely one of the most menacing.

Truth be told, Alien’s Xenomorph is frightening enough from its unnerving appearance alone. Furthermore, the monster is one of the most recognizable and terrifying villains in all of horror. Xenomorph is a calculated, merciless silent beast that stalks its prey to the very best of its ability through countless films in the memorable franchise, all without ever uttering a single word. There are a few grunts and hisses here and there, but for the most part, Xenomorph relies on physical torment.

In a franchise that is considered one of the best in classic horror, Xenomorph is also one of the very best villains in horror that refuses to speak an ounce of dialogue.

3. Leatherface from The Texas Chainsaw Massacre

In a world of silent horror villains, it would be impossible not to include the chainsaw-wielding terrorizer known as Leatherface. While Leatherface is arguably not a cold-hearted type of villain due to performing actions at the demand of his family, he is still a polarizing figure that has many victims under his belt. Truth be told, Leatherface is one of those horror villains that doesn’t need to speak to be fierce. His ability to overpower his victims with his strength and fire up the sound of his chainsaw is enough to make anyone scream.

He does belt out a few screams and screeches every now and then when people fight back against him, but he usually manages to gain the upper hand. Therefore, he remains one of the best horror villains that never speaks a word.

2. Jason Vorhees from Friday the 13th

Friday the 13th’s Jason Vorhees certainly does not need a film full of dialogue to prove that he’s one of the deadliest forces in horror. Rather, his intimidating hockey mask and array of weapons are enough to strike fear in the hearts of his victims. Jason’s vengeful nature is a result of camp counselors letting him drown as a child, and it was definitely no secret that prior to that, Jason was a mute boy. Friday the 13th is one of the most successful franchises in horror and it definitely relied on Jason’s fear factor, because the terrifying killer never murmurs a single word in the movies.

Jason is a widely-popular figure in horror who never taunts his victims with the intimidation of his voice, as he’dhal rather slice them up with a sharp pig splitter. In fact, Jason ceases to ever even grunt or groan in pain, which echoes his determination to stay as silent as can be.

Michael Myers is the prime example of actions that speak much louder than words. You’d be hard-pressed to find someone that hasn’t at least heard of Halloween’s terrifying masked madman. While Michael has experienced several origin stories over the course of many different timelines, one thing remains the same: he never speaks a word. Instead, Michael relies on his haunting appearance — a painted white Captain Kirk-inspired mask, a mangled mechanic jumpsuit, and a sharp butcher knife — to provoke fear in his victims.

His presence is one of pure evil and he inflicts pain and torment upon his victims without ever taunting or mocking them. As a result, Michael stands as the undisputed best horror villain who remains silent throughout the duration of his films.