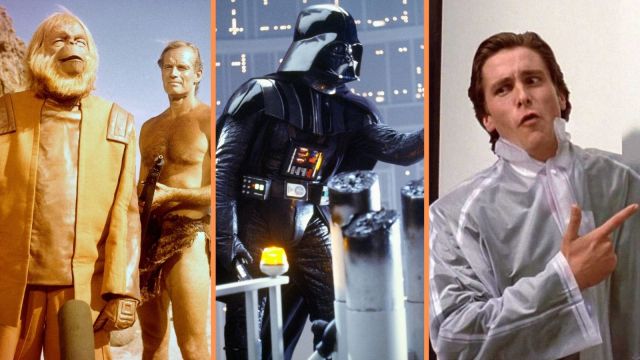 Cinema is home to all kinds of stories, from all walks of life. Giant gorillas climbing skyscrapers, two girlbosses going on a road trip, a man inserting a VHS tape into his stomach: it’s all quality stuff. But is there anything that hits quite as hard as being shocked in theatres?

Some of the best-remembered films of all time have stunning twists, and here are ten of the finest in cinema history.

A ground-breaking science-fiction film from the early days of the genre’s time in serious cinema, Planet of the Apes has left a huge cultural legacy. A film that was an allegory for racism, and class warfare, and came out amid the height of civil rights issues, it sees humans at the bottom of the ladder. Used as lobotomized slaves, crashed astronaut Charlton Heston is trying to escape.

He escapes captivity, only to find out far too late that he isn’t on an alien planet: he’s on Earth in the distant future, following a nuclear apocalypse.

Do you like Huey Lewis and the News? American Psycho has taken on a whole new life twenty years on from its original release. Now a bastion of increasingly ironic “sigma male” memes, it all comes back to its excellent (albeit divisive) ending. Throughout the entire movie we’ve seen Christian Bale do willy-nilly murders of sex workers and coworkers, and generally being quite a nasty man.

The twist, though, is up to interpretation. After all of his crimes are done and dusted, and he thinks his world has come crashing down it appears that it could have all been in his imagination. But, according to the most popular interpretation, it’s a commentary on how the rich can get away with crime because of their power and status. Even if he did the murders, nobody cares, because he’s Patrick Bateman, an investment banker.

Frankly, we shouldn’t even really be talking about this, but we will go on. Fight Club, similar to American Psycho, has amassed a huge following of people who don’t really understand it, quite frankly. It should be obvious that nobody should aspire to be Tyler Durden, nor should they want to be The Narrator.

But, it’s all about the ending we’re talking about. Gasp! He’s not real! And the Pixies play! It’s an iconic ending and one that has been parodied countless times in pop culture in the years since. Is it David Fincher’s best movie? Maybe. Is it better than its video game adaptation? Most definitely.

Widely considered to be the greatest motion picture of all time, Citizen Kane’s legacy can be arguably traced back to its final act. While it’s an absolute marvel of a film that holds up today with ease, filled to the brim with apt social commentary and presenting a proper tragedy, the ending wraps it all in a nice, neat bow.

After an investigator tries to get to the bottom of Kane’s final words and with much digging, he finally gets somewhere near the bottom of it. Rosebud represented something important in his life, but also no single word or thing can describe a man’s life. After this, the sled Rosebud is thrown onto an open fire: the two possessions that reminded Kane of happiness (his snowglobe, and his sled) were now long gone. Dead with him. A scene that will give you goosebumps.

Oh, the early days of M. Night Shyamalan’s filmography. Beautifully done movies with such charisma to them, unlike any else that was out at the time. His first directorial outing The Sixth Sense saw Bruce Willis at his absolute peak: and also arguably the peak of Shyamalan’s career.

The Sixth Sense is possibly the movie with the most well-known plot twist of the last thirty years. He sees dead people, and Bruce Willis was dead all along. What a twist!

A brilliant sequel-of-sorts to 2007’s Cloverfield, 10 Cloverfield Lane changes tack from found footage to an intense, claustrophobic thriller film. After a car accident sees her knocked out, Mary Elizabeth Winstead’s Michelle is saved by an eccentric survivalist named Howard (played by John Goodman) who homes her in his bunker.

The entire film has you questioning whether or not Goodman’s character has gone insane from his paranoia. After several attempts to try and escape, Michelle eventually makes it out and discovers he was right all along. Staggering out of a bunker, she sees exactly what she’d been warned about: aliens and UFOs.

The Empire Strikes Back

It was a miracle, a real lightning-in-the-bottle moment, that lead to 1977’s Star Wars. After several years of build-up, The Empire Strikes Back finally came out and smashed everything people thought they knew about the universe to date. Arguably the best film in the Star Wars franchise, and one of the greatest sequels of all time, its ending is what cemented it in pop culture.

The big bad, Darth Vader, is actually the father of the young Jedi apprentice Luke. This is so iconic it’s perhaps the most well-known moment in all of Star Wars.

One of Alfred Hitchcock’s best films, Psycho was a film that broke new ground for what could be shown in a feature film. Shocking in its day for its approach to violence, sexuality, and horror, it’s one of those films everybody should see: at least once. The film sees Norman Bates end up being a very naughty boy, responsible for countless murders.

But the kicker is that he did indeed have a mother. After he killed her, he took on her persona and used it to murder women he found attractive in order to fulfill his mother’s apparent dying wishes. Talk about mommy issues!

It never moved too far out of the realm of being a bit of a campy cult classic, but Soylent Green did introduce a whole new trope to science fiction writers the world over. One of the first films to tackle the impending crisis of global warming and climate change, it sees an investigation into the death of a businessman.

Again, the ideas are good but the execution isn’t brilliant. The twist, however, is still one people know and love. The one food source everyone eats in this dystopian future (of 2022), Soylent Green, is actually made of people. Shock!

Poorly received at the box office during its 1997 theatrical run, The Game has gained a lot of love over time for its truly psychopathic levels. Starring Michael Douglas and directed by David Fincher, the entire film is built up so perfectly to its twist that it could also double as a tragedy.

Somewhat familiar to Videodrome with its “what is real life” theme, the ending sees everything get turned on its head as Michael Douglas’s brother never actually died.