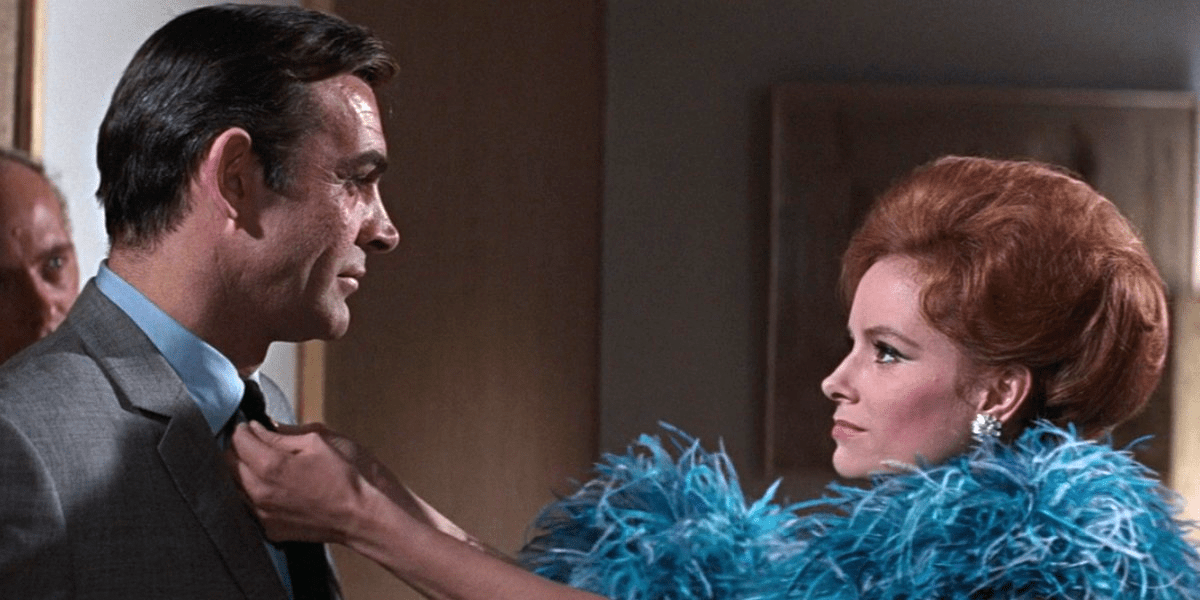 Bond films would be nothing without women; 007 has a severe weakness for the ladies and often finds himself in trouble because of it.

Where many of Bond’s ladies have been forgettable one-night stands, this selection showcases the most formidable female characters in the series.

A Bond girl in her late thirties, Pussy Galore gets number ten on this list for bringing class and maturity to a role normally reserved for younger characters.

Pussy starts off working for the evil Goldfinger before she is eventually persuaded by Bond to join the forces of the Free World. Over the course of the film, Pussy shows strength and independence, oozing confidence while running her own all-female crime ring. It was these qualities that led Bond to utter the words, “You’re a woman of many parts, Pussy.”

Who said every Bond girl had to be good? Thunderball‘s Fiona Volpe is one of the baddies on this list. A SPECTRE agent who is planning to blackmail the British government, Volpe is a deadly enemy. Early in the film, she uses her good looks to seduce a NATO pilot and steal his plane – which doesn’t sound so bad at first, until you realize it carries two nuclear bombs, and later tries the same trick on Bond. She even captures him at one point, and comes closer than most to killing 007.

Fiona is the type of girl that makes sleeping with your Walther PPK under your pillow a sensible idea.

After the excesses of Moonraker, 1981’s For Your Eyes Only brought Bond back down to Earth with a more conventional (and hard-hitting) spy plot. Melina (played by Carol Bouquet) is of British/Greek heritage and enjoys life to the fullest. Her happiness comes to an abrupt end on the day her parents are brutally murdered. Her quest for revenge leads her to team up with Bond, and she pulls him out of more than one dangerous situation. She also proves deadly with a crossbow.

Bouquet’s portrayal of an ordinary woman driven to become a ruthless killer results in one of the most memorable characters in the franchise.

A Russian super spy with a personal grudge. Anya Amasova’s lover was shot by Bond in the opening of The Spy Who Loved Me (one of the more successful Roger Moore outings). Amasova is just as deadly as Bond, and could probably have stopped the evil Stromberg alone if she had wanted to. She even gets the best of 007 at the end of the film, but ultimately refrains from killing him. Anya was superbly played by model Barbara Bach.

In real life, Beatles drummer Ringo Starr was so smitten with her performance that he arranged a meeting and the pair eventually married in 1981.

Vesper is a British agent assigned to Daniel Craig’s Bond in Casino Royale. She is not an action hero by any means, but what she lacks in combat prowess, she makes up for in guile. Vesper harbors a whole web of dark secrets, easily making her the most complex Bond girl on this list. The fact she manages to outmaneuver Bond at every turn even as her life is falling apart makes her one very emotionally tough lady.

Vesper is one of the few Bond girls James has ever truly loved, and he falls for her to such a degree that he becomes blinded to what’s really going on.

The decision to bring Sean Connery out of retirement for 1983’s unofficial Never Say Never Again was not the best one ever made, but it did give Bond fans a truly excellent (and scary) bad Bond girl in the form of SPECTRE agent Fatima Blush.

Fatima is supremely arrogant and self-obsessed almost to the point of mania. In one scene, she holds Bond at gunpoint and threatens to shoot him in a very private place. But before she can consign 007 to the history books, Fatima forces him to write that she provided the best sex of his life. Bond escapes castration with an explosive pen and the brilliant line, “I’ve just remembered. It’s against service policy for agents to give out endorsements.”

Grace Jones brought an edge to her performance as bodyguard May Day. May Day is every bit Bond’s equal in the fighting department, being able to kill with bullets, bombs, or even her bare hands.

Her alliance with Bond is one of the more memorable parts of an otherwise mediocre film. Roger Moore was showing his age in A View to a Kill, and though the film still had some good action scenes, it was Grace Jones who provided a lot of the physical drive that was needed.

She may come with the standard sexualized name, but Xenia isn’t just a pretty face. She is a Bond girl with a serious anger management problem who derives orgasmic pleasure from strangling a series of hapless men between her thighs. Essentially, Xenia is a serial killer.

Bond first meets her during a high-speed chase above Monte Carlo before finally engaging her unique style of foreplay in a sauna. Played with some serious style by the brilliant Famke Janssen, Xenia is the character in Goldeneye that everyone remembers.

M of the 1990s and 2000s was brilliantly played by veteran British actress Judi Dench. As head of British intelligence, M was Bond’s boss. She could be ruthless, ordering 007 into the most dangerous situations (and even disowning him at the beginning of Die Another Day), but she had a softer side, caring deeply about her top agent even as she continually risked his life for England.

Judi Dench’s M may not be your standard Bond girl, but she is certainly one of the toughest female characters in the series. Tortured in The World is Not Enough and mercilessly hunted in Skyfall, M proved every bit as brave as Bond.

Ever since she emerged bikini-clad out of a Caribbean sea, Honey Ryder (played by Swedish actress Ursula Andress) became the de facto Bond girl. But Honey isn’t just some love interest for Bond; she is a strong character in her own right. Abandoned at a young age, Honey has learned to live on her wits, becoming a successful shell diver in Jamaica. She also carries a knife and knows how to use it.