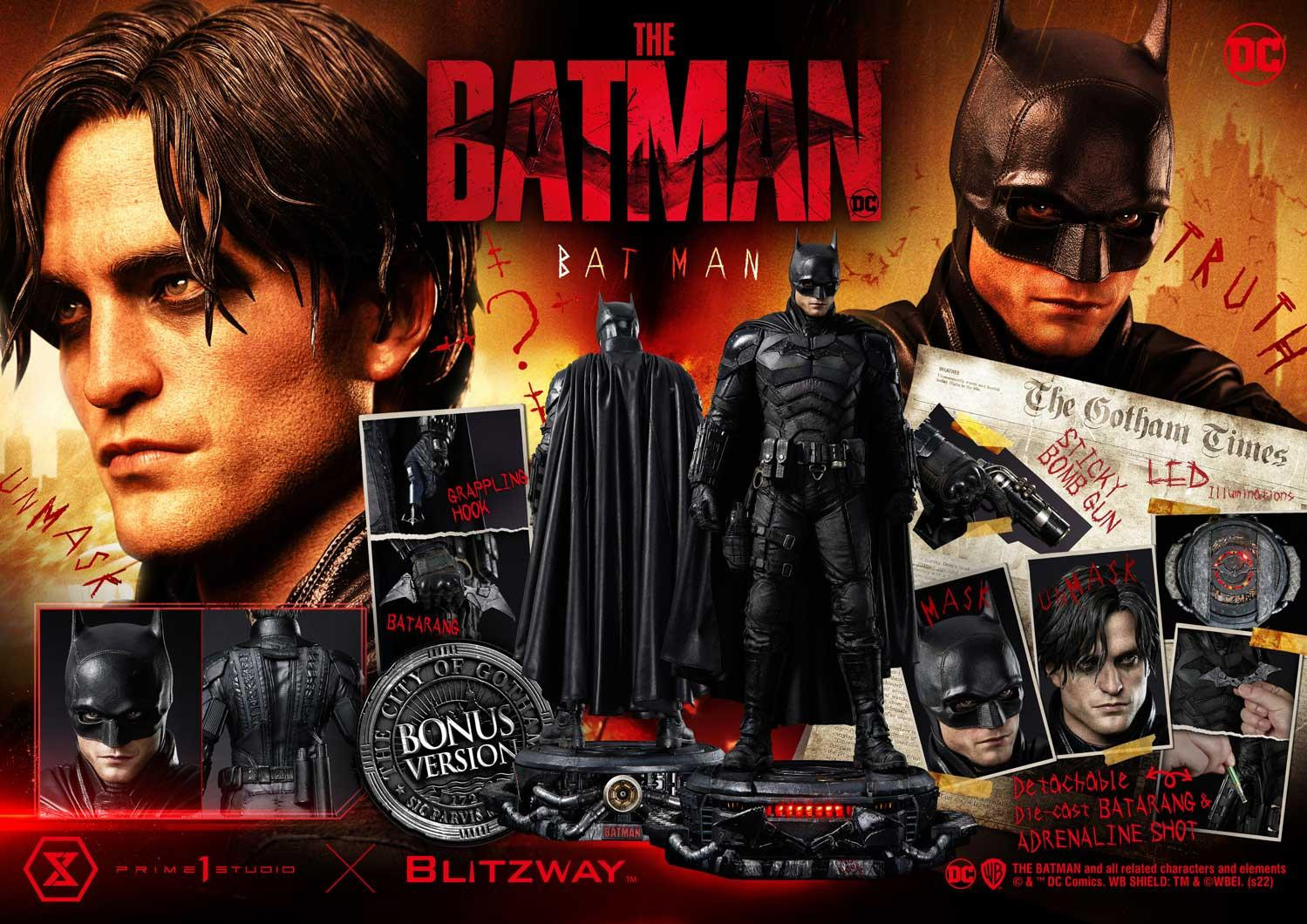 Did you ever wanna feel like the scowl under the cowl lurks in the shadows of your own home?

Now you can own the latest iteration of The Batman’s Batsuit — albeit in a 1/3 replica size, and non-removable from a model — to display in your own home, not as “just a call,” but as a beacon. Or as something to store away in your mini-Batcave until a later date, when it becomes an even rarer —thus more expensive —collectible, if that’s your thing.

You can’t quite wear it, but relatively soon you could hold a “31-inch tall vision of Vengeance” in your hands; because a figurine of Robert Pattinson’s version of Batman, exquisitely-detailed and in full Batsuit, has been unveiled (or unmasked, if you prefer), replete with realistic-looking “ballistic cloth,” carved-from-marble jawline, and simmering eyes.

This is no static statue, either, as there are removable parts (and heads) aplenty, with bonus items for those who order early.

Released by Prime 1 Studio and Blitzway, the preorder begins Friday at 3 p.m. in Japan (that’s 1 a.m. EST). The “1:3 Scale Museum Masterline MMTBM-03S: Batman Bonus Version statuette” collectible features a level of extraordinary detail that truly resembles the real thing, right up to the look of the suit’s fabric, rendered in every action belt, wristband and thigh pad to boot.

Take a gander below — the level of detail really is something else, as you can see every intimate detail and nuance of the latest Batsuit, even the face of its main man.

“Blitzway’s incredible artisans have brought their finest sculptors and most accomplished painters to bring Robert Pattinson’s turn as the Caped Crusader to vivid life,” the website’s release states.

Check out the gallery below.

(Anyone else getting some serious The Crow vibes from the un-cowled version?)

From the makers: “The workmanship on the cowl calls to mind how Bruce Wayne created his suit by hand. Blitzway’s artists made sure to convey a sense of realism to all aspects of the costume. The armor plating on Batman’s body has a texture of ballistic cloth, stretched over hard armor plating, and that is exactly how it looks on this statue.”

There are two swappable heads (cowled and un-cowled), three swappable right hands, and two swappable utility belt pouches. Plus, the Batarang on the chest — yeah, that detaches too, in case you want to fling it around. The base is Batmobile-inspired, as well.

And those who preorder get two more parts that detach; a swappable left arm/grappling hook, and a swappable right hand holding the Batarang.

Another cool detail is that the artists differentiate the pieces of the suit, and even the cloth, while maintaining the all-black color scheme.

The limited-edition figurine clocks in at $1,599 with a reservation deposit, and will be ready for your cave sometime between June and September… of 2023.