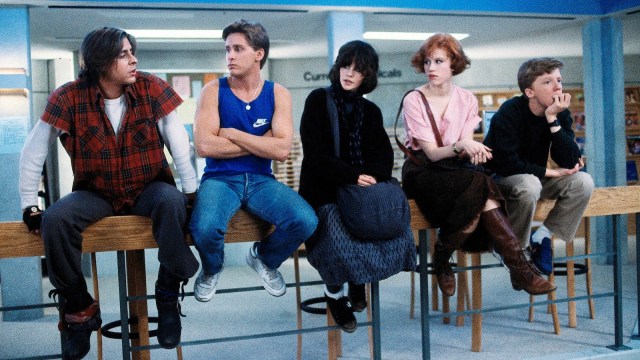 As students all over the world return to the classroom, it’s never a bad time to watch some of the most iconic back-to-school movies in history. From the charming romantic comedies to musicals and timeless cult classics, high school and college films are usually fun and pack a couple of moral lessons along the way.

Sure, these films might not capture the dreadful assignments, projects, and tests that plague students, but isn’t that why they’re so loved? They effectively transport viewers to a lighter school setting. While they may not mirror everyone’s school experiences, they do offer some realistic moments — reuniting with friends (and making new ones), trying out new activities, the pressure to fit in, and finding oneself.

From High School Musical to The Breakfast Club and all points in between, here are 10 movies that you can enjoy while counting down the days till you pack your bags and venture into the uncertain halls of your campus.

Even though the events of this family favorite are very unlikely to happen in real life, High School Musical still makes for a very solid, interesting watch if you’re after a fairytale high school experience. The film is responsible for propelling the likes of Zac Efron and Vanessa Hudgens to stardom, but that’s not all. From the catchy music numbers, dance breaks, and the very fabulous Ashley Tisdale as Sharpay and Lucas Grabeel as Ryan, you’d be a real bully not to give High School Musical its props.

9. Akeelah and the Bee

While she’s currently on the receiving praise for her lead role in Nope, Keke Palmer has been a bright star for a long time, beating out 300 girls for the part of the titular character in this drama. This popular film also stars heavyweights Laurence Fishburne and Angela Bassett and teaches both kids and parents the value of community and believing in yourself.

Pitch Perfect succeeded in reigniting an appreciation for a cappella and became a worldwide hit when it was released in 2012. Led by an ensemble cast of talented women, the musical comedy spawned two successful sequels. It’s a fun dive into life on campus, and touches on topics such as sisterhood, unlikely friendships, and becoming the underdog.

A modern take on Nathaniel Hawthorne’s The Scarlet Letter, Easy A is the 2010 gift that keeps on giving— a stellar performance by Emma Stone, Amanda Bynes’ return to the screen, and reviving the world’s interest in Natasha Bedingfield’s  “Pocketful of Sunshine.” It’s one of the most fun high school movies to exist and is carried by a brilliant ensemble cast. Behind the comedy is actually a very important lesson about not indulging in false rumors and gossiping, and sex shaming.

6. The Perks of Being a Wallflower

An emotionally stirring addition to this list is 2012’s The Perks of Being a Wallflower starring Logan Lerman, Emma Watson, and Ezra Miller. The coming-of-age drama follows a young introverted teenage boy who suffers from post-traumatic stress disorder and must navigate high school with his new and exciting friends. The story touches on mental health, depression, and learning to find oneself in the midst of the chaos that is high school. Important lessons to takeaway are to always be tolerant of others and never be so quick to judge, but instead, show love and be accepting.

A cult classic, Bring It On is a staple when it comes to iconic teen movies. Headed by Kirsten Dunst, Gabrielle Union, Eliza Dushku, and a wealth of talented supporting actors, Bring It On offers a cheerleading romantic comedy filled with impeccable one-liners, excellent choreography, and well, cheers. While the film focuses on a high school rivalry, it touches on deeper topics, such as cultural appropriation, inequality, and class structures which make it a relevant watch no matter the year. There have been numerous direct-to-video spinoffs, but just like the aforementioned American Pie, nothing comes close to the wit and magic of the first.

Heralded as one of the most quotable films of all time, this teen comedy packs a ton of snarky one-liners into its 97-minute run time. Mean Girls is one of the most popular teen and high school movies of all time and for good reason. The writing, direction, and acting are nothing short of phenomenal, and it offers a realistic depiction of the average high school experience, complete with peer pressure, fashionable moments, petty squabbles, and a queen bee everyone loves to hate.

This 1995 cult classic is considered one of the best teen movies ever made, and fans continue to enjoy referencing it today. It’s a coming-of-age comedy about cherishing friendships, helping those around you, and being different. Clueless is a fashionable, fabulous, and funny film that isn’t short on heart and soul.

Consistently ranked as the best high school film of all time, The Breakfast Club is the ultimate teen film, complete with great music, fantastic acting, and a well-written story. It’s been over 35 years since it was released, but it continues to win the hearts of teens for its relatability. At the core of every teenager’s heart is to be seen as an adult, and this classic captures that essence, making it a timeless staple in cinema.