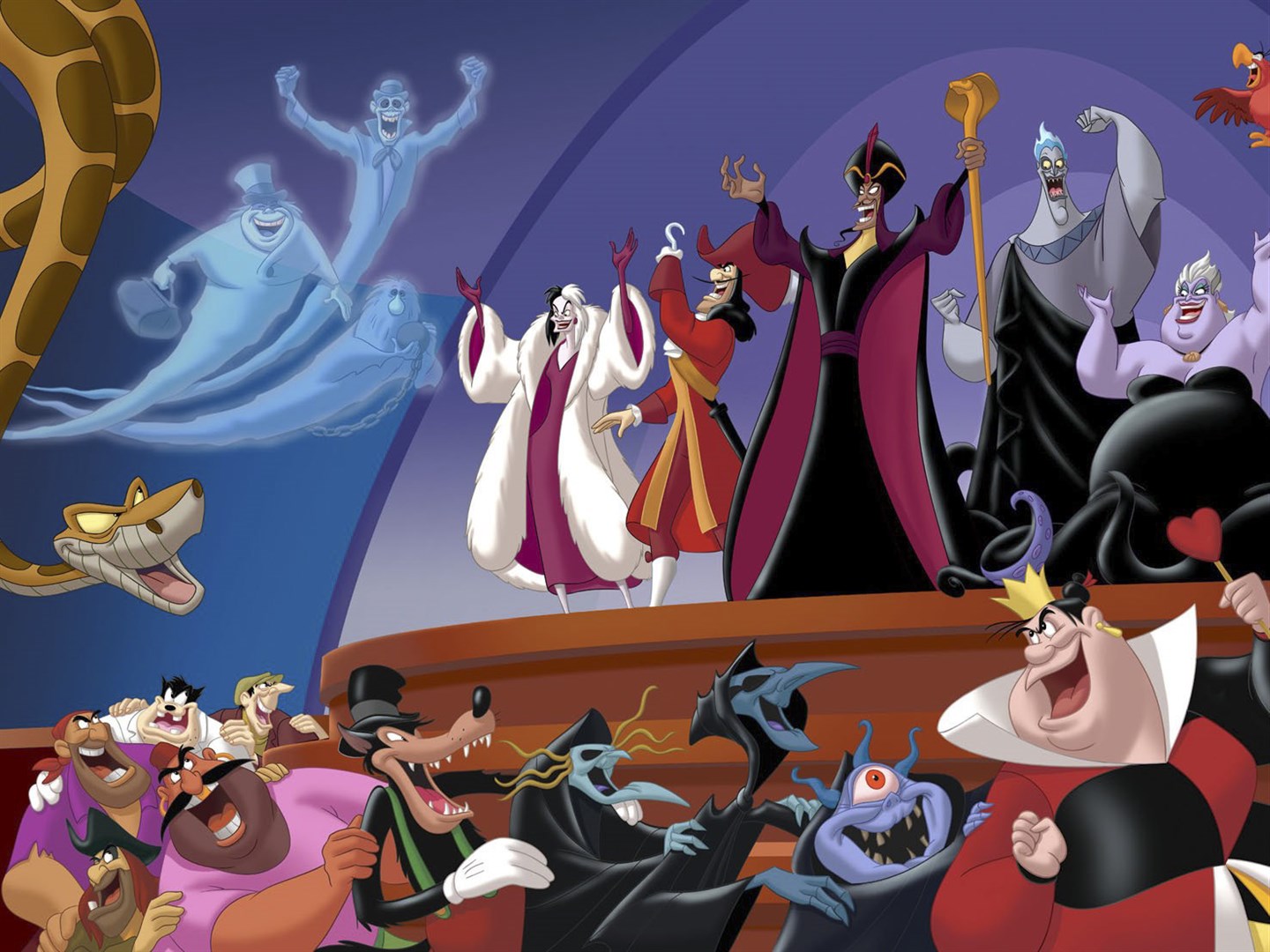 Disney fans are some of the most loyal you’ll ever meet. From animated movies to live-action remakes, they’ve seen it all, and given that Disney rarely disappoints ⏤ especially in the music category ⏤ that loyalty makes perfect sense. Whether it be an instrumental tune or a full-blown dance number, the great musical minds behind Disney music are some of the most talented in the business.

While Disney has created a ton of great songs over the years, this list will focus on the melodic malevolence produced by Disney’s most wicked villains. Everyone has a favorite Disney villain, and most fans have a favorite song in association with said villain. Did yours make the list? Keep reading to find out.

While Pocahontas has received much criticism for its historical inaccuracies, there’s no denying that Alan Menken put his absolute all into the music. Many songs from the film topped charts and received remixes regularly, though some were less appreciated — including Governor Ratcliffe’s song about mining gold in an exciting settlement known as the “New World.” The whole sequence is bizarre, but also strangely entertaining. We see Ratcliffe dream about taking the throne of England when all his rivals bow down in awe of his achievements and riches. The delightful use of “mine” in the possessive sense and in the physical sense is but one example of Menken’s genius.

For anyone who could overlook the blatant racism and xenophobia in Pocahontas and manage to finish it, Ratcliffe never finds the gold that he seeks and blames Pocahontas’ tribe for it, which leads to one of the many conflicts of the movie, accompanied by an unmissable tribal battle cry/song called “Savages.” Instead of returning to England with heaps of gold and taking the throne, Ratcliffe is punished as a war criminal (rightfully so) and incarcerated.

With Lin Manuel-Miranda at the helm of the musical score, Moana was destined for greatness from the get-go. This was Miranda’s first time working on a Disney movie, his second being the current hit Encanto. Moana was fantastic all-around: the plot, music, animation, and characters checked all the right boxes. The film also steered away from the unnecessary romantic subplots that so many people loved the Frozen movies for, which is interesting considering that Moana was Frozen‘s princess movie successor.

In the song “Shiny,” we meet Tamatoa, a giant crab and Maui’s arch-nemesis who loves all things sparkly and shiny. When Moana ventures down into the depths of Lalotai ⏤ a realm inhabited by monsters ⏤ to help Maui retrieve his hook, she is greeted with a jazzy song that explains why Tamatoa likes to be shiny. (Hint: it helps him catch his food.) “Shiny” is a song that changes directions multiple times, but it keeps the same tune and rhythm all while producing a catchy melody you’ll be singing in the shower for weeks.

Some people might be confused about why “Poor Unfortunate Souls” is so low on this list. It is a great song — there’s no denying that. However, Disney always delivers with villainous tunes and this one simply couldn’t compare. The Little Mermaid is one of Alan Menken’s more famous musical works and has even received a Broadway show adaptation. In both versions, the evil sea witch, Ursula, is the primary antagonist and makes a contract with Ariel that permits her to become human for three days in exchange for her voice.

The voice of Ursula, Pat Carroll, really wowed audiences with her vocal performance in “Poor Unfortunate Souls” and produced one of the most iconic lines in any Disney song: “Don’t underestimate the importance of body language!” When combining Carroll’s deliverance of the line with Ursula’s flawless and humorous animation, the result is unforgettable. The Little Mermaid has plenty of songs to belt out on a long road trip, but “Poor Unfortunate Souls” definitely takes the cake.

Usually, these lists are restricted to animated Disney movies, but how could the topic of “villains” be mentioned without naming the Sanderson Sisters? Considering that the troublesome trio have an entire day dedicated to their movie on Freeform, it seems only right that their rendition of “I Put a Spell on You” would make the cut for “best villain songs.”

Led by Bette Midler as Winnifred Sanderson, Winnie and her sisters (portrayed by Sarah Jessica Parker and Kathy Najimy) perform “I Put a Spell on You” at the town Halloween party to place a literal spell on the adults, which causes them to continuously dance. Max, Dani, Allison, and Binx try to warn them, but to no avail. Hocus Pocus has risen through the ages to become a cult-classic and Halloween must-see, even 30 years after its release.

Before anything else, we have to clarify that yes, Anastasia is now technically Disney property. While it was intended to be a Fox original, Disney acquired the rights a few years back, making it fair game for this list, thankfully. Rasputin’s song “In the Dark of the Night” is so catchy, so scary, and so villainous that it thoroughly terrified adults and children alike.

Along with the animation sequence of his body falling apart and coming back together again, there was truly nothing scarier to witness. Rasputin is an overall entertaining villain, the perfectly balance of terror-inducing and downright goofy. That goes for himself and his bat sidekick, Bartok.

The Princess and the Frog is truly one of Disney’s most underrated movies. In recent years, it has gained more popularity for its exploration of taboo themes, but when it was first released, it failed to meet the standards set by its predecessors. The Princess and the Frog stars Princess Tiana, an overworked and underpaid waitress living in New Orleans. The film borrows jazz influence and embraces its root down in New Orleans. As far as stand-out musical numbers go, “Friends on the Other Side” is one that steals the show in both the melodic and the lyrical departments.

Not only do the lyrics mention voodoo — more commonly known as “fortune telling,” a New Orleans trademark ⏤ but they emphasize tarot card reading, which is another big attraction in New Orleans. What stands out about this song is that Dr. Facilier, the main antagonist, heightens the jealousy of Prince Naveen’s assistant, Lawrence. When Dr. Facilier opens Lawrence’s eyes to untold riches, fame, and all the things his mediocre life could be instead, Lawrence becomes a sidekick of sorts. Dr. Facilier thus tricks the man into helping him with his dastardly plan to steal the money of a wealthy sugar mill owner and sets the film’s plot in motion.

One of the great Disney classics is Beauty and the Beast and part of its irresistible charm comes from the beautiful music that Alan Menken continued to deliver. This song is, quite literally, a narcissistic anthem for the biggest narcissist of them all: Gaston. Sung mostly by his hype-man, Lefou, “Gaston” expresses (in song form) how great of a guy Gaston is in order to cheer him up after Belle shuns his affections.

Beauty and the Beast is another movie that received a live-action adaptation, and with it, a reimagining of this hit song. The live-action film, which stars Emma Watson as Belle, Dan Stevens as the Beast, and Luke Evans as Gaston, includes a tap-dance sequence along with some more comedic lines from Josh Gad’s Lefou. When audiences get to witness Gaston lifting three girls on a bench, swallowing eggs with the shells still on, and spitting halfway across the tavern into a bucket, what’s not to like? There’s certainly something for everyone.

Tangled is a newer release and the first of its kind to welcome an all-new animation style in a Disney princess movie. It was visually stunning and severely underrated, but it received overall mixed reviews. Arguably, its most memorable song is “Mother Knows Best,” which more than proves itself as a well-written, manipulative song that captivates the audience just as much as it does Rapunzel.

Mother Gothel is without a doubt one of the scarier and more realistic Disney villains in recent years. She spends Rapunzel’s entire childhood gaslighting her and lying about the dangers of the outside world in order to keep her magical powers concealed. Not only is Gothel cutthroat with the Stabbington brothers, but she tries to send Flynn to his death before stabbing him herself. “Mother Knows Best” is just a glimpse into her maliciousness.

As most people know, The Lion King featured music by the one and only Sir Elton John. As such, it would be criminal to not put such an influential movie so high up on this list. The Lion King is named as a fan-favorite Disney movie and possesses one of the only Disney soundtracks to go straight to #1 on the charts. With a plot based on Shakespeare’s Hamlet, it not only has great music, but its inspiration seeps out in its spectacularly poetic storytelling.

“Be Prepared” is a top-tier Disney song in general, even when ranked among non-villain songs, so the second spot seems more than fitting. In the song, it’s explained that Scar dreams of taking over Pride Rock and taking out his competition (Mufasa and Simba) for absolute and unquestionable royal status as the next of kin. Not to mention, Scar manipulates the hyenas, who also feel mistreated and demoted. However, Scar’s diabolical plans receive dire consequences when the hyenas turn on Scar and denounce their allegiance to him, an afterthought that only makes the song more ironic.

As for the number one most villainous Disney song, it has to be “Hellfire” from The Hunchback of Notre Dame. This movie was met with its criticisms and its fair share of backlash given the disturbing themes present. It was obviously based on Victor Hugo’s acclaimed novel and the mesmerizing soundtrack trumps all other production areas. All of the songs are good, but something about the gospel choir backing up Frollo in this one is so symbolic, especially as he sings about Esmeralda choosing between an unwilling romance or burning at the stake for practicing witchcraft.

Not to mention, Frollo is easily the selling point for The Hunchback of Notre Dame. He has been named by some as the most evil villain in Disney history, as he would have disposed of baby Quasimodo had it not been for a priest watching. Finally, the lyrics are so powerful in conveying that because Esmerelda won’t love him, Frollo thinks that she deserves to burn in hell. Not only is it unsettling, but historically compelling. “Hellfire” is an enchanting and horrifying mixture of beautifully written and well performed.

There you have it ⏤ the best villainous songs in Disney history. Will any more come out in future years and rise to the top of the list? Knowing Disney, it’s highly possible. We’ll just have to be prepared.