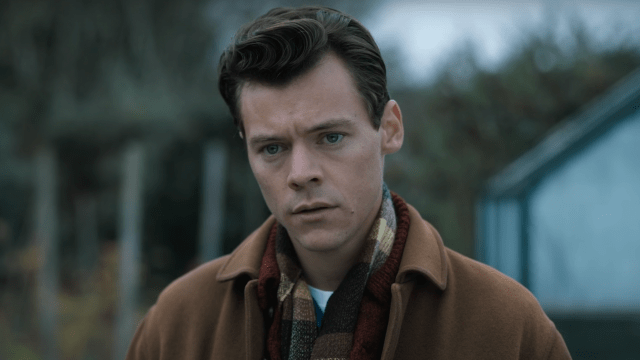 First and foremost, Harry Styles is a musician. At least that’s how we think of him now. More recently, though, Styles has branched into acting, leading some to wonder if he’s a budding movie star in addition to his clear musical talent as a musician. What remains to be seen, though, is whether Styles’ career as an actor will take up. Thus far, he’s only taken on a handful of roles, and some of those roles have been far more successful than others. These are all of the movies that Styles has appeared in to date, ranked from best to worst both based on the movie’s overall quality and based on Styles’ performance in them.

Styles only shows up for a brief moment in the post-credits scene in Eternals, and it’s not exactly one of the more inspired post-credits scenes in Marvel’s long history of the form. Styles shows up to play one of Thanos’s brothers, but it’s unclear what he’s actually there to do. Ultimately, the scene seems to exist only to let everyone know that Styles would be joining the MCU. What’s even more clear, though, is that Styles hasn’t spent much time thinking about the character just yet.

The newest of Styles’ on-screen performances, My Policeman, is most notable for the ways in which he seems to be almost absent from it. The movie tells the story of a policeman who seems to be happily married and eventually begins an affair with a male museum curator. In part, because it’s so intent on depicting the tragedy of this same-sex relationship, which occurred when these relationships were outlawed in the U.K., it forgets to revel in any of the details of its characters. Styles mostly just disappears into this role, and not in the way that someone like Daniel Day Lewis might.

Given what Don’t Worry Darling is actually about, it’s clear that Styles wasn’t exactly a natural fit for the role of Jack, a man who seems to be happily married in the 1950s. Even so, he exudes plenty of charm, especially in the movie’s early sequences. We know that the mystery at the heart of the movie revolves around what his character knows that Florence Pugh’s does not, but it’s fairly easy to buy the two of them as nothing more than a happily married couple. As the movie develops, we begin to see the sinister layers beneath Jack’s veneer, and Styles’s performance gets a little more unsteady.

Christopher Nolan was among the first directors to take advantage of Harry Styles on-screen persona, and he’s still the person who’s done it the best. In Dunkirk, Nolan casts Styles as one of several young British soldiers who are trapped on the beach at Dunkirk. Styles is one of the more selfish members of this group, but his selfishness doesn’t transform him into the villain. Instead, Nolan uses Styles’ persona against him, making him stand out because he doesn’t seem as willing to lay his life on the line as many of his fellow soldiers.