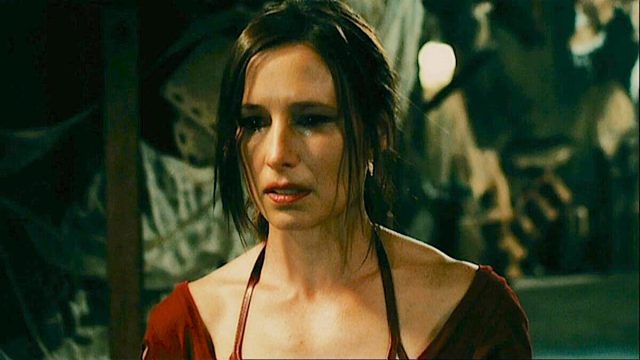 Aside from the notorious Jigsaw killer John Kramer, the Saw franchise has featured many apprentices, but none quite as popular as Amanda Young.

Amanda Young has an extensive history. From the moment she has a fateful encounter with Jigsaw to her eventual death in Saw III, she’s been nothing if not an ever-present force of nature. Naturally, a large amount of credit is due to Shawnee Smith‘s phenomenal acting and commanding on-screen presence as Kramer’s first and only female accomplice. Amanda, who suffers from Stockholm syndrome, becomes John’s apprentice officially sometime during Saw III, before the events of Saw including Dr. Lawrence Gordon and Adam Stanheight’s test.

As confusing as the timeline can be, Amanda joined John long before rubbing elbows with Adam Stanheight, whom she helped kidnap and prepare for the Adam vs. Gordon test. While Shawnee Smith only appears in the flesh in the first three Saw movies, her involvement in the Jigsaw murder spree is referenced in flashbacks in Saw IV and beyond. She isn’t quite as fleshed-out as John Kramer character-wise, but Amanda’s motivations make her endlessly intriguing.

Amanda was a drug addict who became Jigsaw’s next victim

In 2004, Saw introduced Amanda as a self-destructive drug-addict whom John Kramer targeted to undergo a rigorous test to change her life for the better. Sometime before that, Eric Matthews, a corrupt detective whom we meet in Saw II, forged evidence to falsely accuse and link Amanda to a drug crime investigation. Ultimately, Matthews’ wrongful forgery led to Amanda’s conviction on the grounds of drug possession. Subsequently, she became addicted to heroin while in jail.

In a flashback showcasing John Kramer, his ex-wife Jill Tuck, and Jigsaw’s first test subject Cecil Adams, we see Amanda suffering from extreme heroin withdrawal. She convinces Cecil, a reckless degenerate, to rob the clinic and steal its methadone supplies. During the commotion, Jill Tuck endures a miscarriage after Cecil accidentally hits her stomach with some force. Amanda watches the incident unfold, resulting in her panicking and fleeing the clinic. Due to her degrading life as an addict and the role she played as a passive onlooker to the assault on John’s ex-wife, Amanda is targeted by John Kramer, whom we learn to be Jigsaw. John abducts her, straps her to a chair in an abandoned warehouse, and attaches one of Saw‘s most iconic contraptions — what audiences would come to know as the “reverse bear trap” — to Amanda’s head and jaw.

Equipped with a 60-second timer, the reverse bear trap will rip open Amanda’s face if she fails to complete a simple task, which is explained to her via a television set by Billy the Puppet. In order to walk away, Amanda needs to extract a key from the stomach of her fellow addict, Donnie, who lies a few feet away — heavily sedated but very much alive. Amanda, after some hesitation, carves open Donnie’s stomach and frees herself. Immediately afterwards, Billy — the ventriloquist puppet — arrives on a red tricycle, congratulating Amanda for completing her test and reminding her that she now knows how to appreciate her life. Amanda — at that moment in time — became the only known survivor of Jigsaw.

Following on from the events of Saw, Amanda joins John Kramer willingly after viewing him as a father figure. From then on, she thrives as John’s accomplice. When John Kramer targets Eric Matthews — whom we learn has wronged more people than just Amanda — John abducts everyone that Eric Matthews has ever wrongly incriminated and gathers them all in an abandoned house filling it with nerve gas that gradually poisons them. Intended to mislead the audience in a red herring, Amanda Young is selected among the participants, serving to observe the progress of the other test subjects.

Later, in Saw II, after a number of lives are taken, the group find themselves in an ominous room dominated by a large hole filled with thousands of used syringes. Xavier, a fellow test subject, discovers that Jigsaw intended for him to sift through the syringes to look for an antidote to the nerve gas. In a blind rage, Xavier grabs Amanda and throws her into the pit, demanding that she find the antidote instead. After some understandable hesitation, Amanda rifles through the syringes under Xavier’s command.

She survives and watches as the subjects turn feral with the need to survive, particularly Xavier, who begins murdering the others to save himself. Eventually, Amanda takes Daniel, the son of Eric Matthews, to John’s hideout — hours after the test was conducted — and returns to the abandoned house to confront Eric, who is none the wiser and thinks that Daniel is in immediate danger. In the same grungy bathroom that Adam Stanheight and Dr. Lawrence Gordon conducted their test, Amanda disguises herself and hides in the bathtub. When Eric approaches her, she lunges out in a black cloak and a pig mask to attack him with an anaesthetic. Amanda shackles Eric to a pipe in the bathroom a lá Lawrence Gordon and leaves him to die.

In Saw III, we as an audience learn in a definitive sense that Amanda has been working with John since Saw (2004). After she survives her traumatic test, John takes Amanda under his wing and offers her an opportunity to reinvent herself as Jigsaw’s accomplice. Feeding into the Stockholm syndrome, John becomes Amanda’s surrogate father; she learns and applies his biased worldviews and adopts his questionable and murderous techniques for punishing the ungrateful.

Especially prominent in Saw III, it comes to light that Amanda has been ignoring John’s work ethic by making inescapable traps, thus defeating the point of his teachings. These rigged traps will kill the subject regardless of whether or not they complete the test, thereby rendering Jigsaw’s modus operandi redundant. John Kramer, whose terminal cancer is accelerating at an incurable speed, decides to conduct one final test to decide if Amanda is capable of continuing his work. Fueled by jealousy from John shunning her affections, Amanda acts abusively toward Dr. Lynn Denlon, the abducted surgeon operating on John’s brain tumor.

While Lynn’s husband, Jeff completes various trials, a delirious John (after taking a saw to the brain) professes love for his ex-wife, Amanda mistakes his intentions for an attraction to Lynn and becomes enraged. She refuses to remove the shotgun collar from Lynn, which will detonate and murder her if John flatlines. After some heated discourse, Amanda shoots Lynn in the abdomen, which is witnessed by Jeff, who retaliates by shooting Amanda in the throat. As she succumbs to her injuries, John remarks that she wasn’t suitable to take over the Jigsaw legacy.