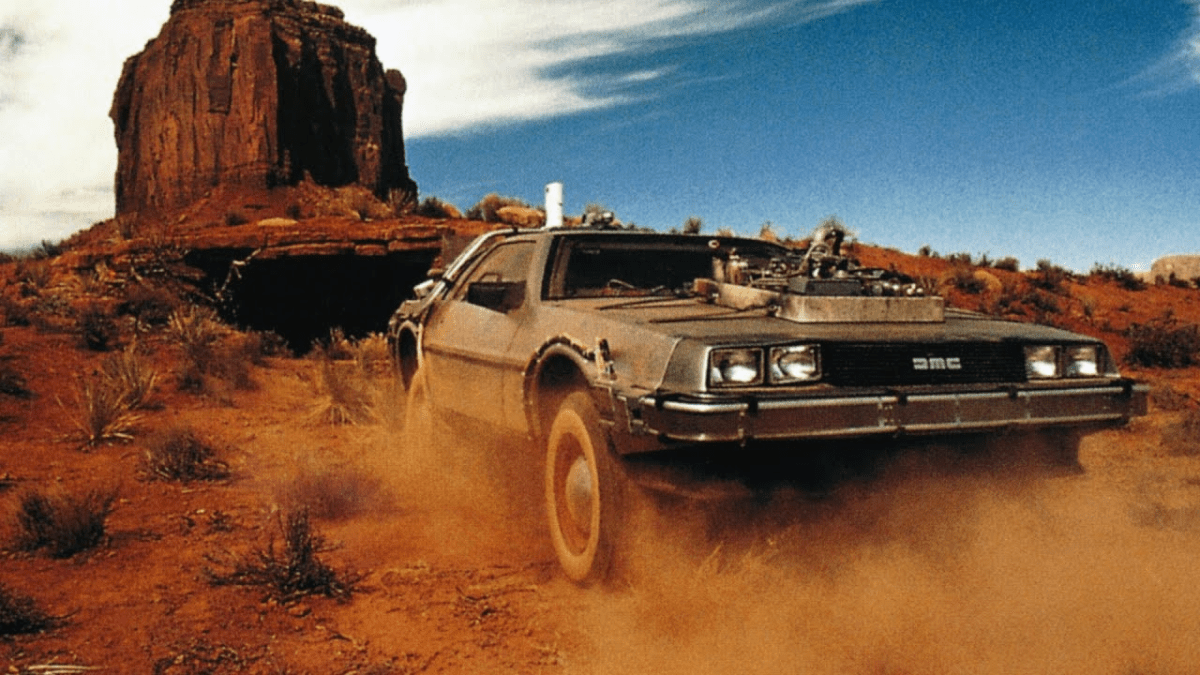 What’s the best thing about sci-fi? Is it the escapism? The thrill of seeing something that doesn’t exist in our world? How about the cool vehicles? To be honest, all of those things are viable reasons.

If you’re a sci-fi fan, then you’re probably intimately familiar with certain iconic characters, and by extension, the vehicles they drive. Some are so iconic, like the DeLorean, that when you see it you know exactly what you’re watching, and the memories flood in.

This list contains some of the fastest, sleekest and most memorable vehicles in popular cinema, and while some are instantly recognizable, others are a bit more esoteric. All are incredibly fun. For a certain fan, that’s the selling point. In this list, we’re going over vehicles only, so that’s why the Millennium Falcon, X-Wings, or TIE Fighters are on the list.

The light runner from Tron: Legacy

It’s hard to find a sleeker, more neon looking speed cycle than this one. The bike in Tron: Legacy is an upgrade from the ones used in the first movie and are intentionally meant to mimic the look of a really, really fast vehicle.

Unlike previous iterations, the front and back wheels are the same size. It’s powered by pure liquid energy, and the light trails can be turned off and on at will. The front wheel is locked in place so the only way to turn is by tilting the cycle. During especially tricky maneuvers little fins spring out behind the riders feet. Of course what really makes these things look incredible are when they’re in action on the light grid. Running into another rider’s light trail will cause the bike to disintegrate into a baton. Fun!

The DeLorean from Back to the Future

There aren’t many movies that have the cultural cache equal to that of Back to the Future. The combination of Christopher Lloyd’s Dr. Emmett Brown and Michael J Fox’s Marty McFly proved to be one of the most iconic partnerships in cinema history. The movie even kind of inspired the relationship between Rick and Morty, as those characters both contain shades of the Doc and Mary.

Central to the plot and the characters is the plutonium-powered time machine. The DeLorean, as everyone knows, needs to hit 88 miles an hour to time travel. The legend goes that Doc was hanging a clock in his bathroom and slipped and fell on a wet toilet and hit his head on the sink. When he came to, he had a sort of vision of the flux capacitor, the mechanism that allows for traveling through time. As to why Doc chose that particular model of car, he told Marty that it was stylish, and the stainless steel body helped with “temporal displacement.”

Here’s a fun trivia fact: The original car’s speedometer only went to 85 mph, due to a law from the Carter era, so producers had to fashion a new one that went to 95 mph.

The spice harvester from Dune: Part One

Sure it’s not the Ornithopter, and sure, it’s not the sexiest or sleekest vehicle you’re going to see, but it sure is a marvel. Spice harvesters are incredibly sturdy (unless you’re a sandworm), mobile spice factories that harvest melange.

It would get dropped by a carrier ship and try to harvest as much spice off of Arrakis as it could before the sandworms arrived. Oh, and they always showed up because this tank is noisy. Also, you can tell a ton of detail went into making this thing look realistic.

Also, spice harvesters are huge. The scale really helped tell the story by A.) showing how massive the sandworms are, and B.) illustrating just how difficult and dangerous an endeavor it is to harvest spice on the dangerous surface of Arrakis.

The taxi from The Fifth Element

A good sci-fi vehicle is synonymous with its driver. The two are interconnected in a way that you can’t imagine one without the other. Such is the case with the taxi in The Fifth Element. Flying cars are done all the time and had become cliché in sci-fi movies, but this movie changed all that.

No longer forced to be in long lines of traffic, we were treated to one of the most exciting and innovative police chase scenes of all time. Finally, it felt real and dangerous, like someone could die at any moment.

The taxi was an extension of Korben Dallas, and its messy interior provided a lot of insight into his character. It’s based on a sketch by comic book artist Jean-Claude Mézières and appeared originally in a comic from the ’90s, The Circles of Power from the Valerian and Laureline series.

Here’s a little more info about the taxi courtesy of Science Fiction Archives.

“When french director Luc Besson discovered the album, he was so impressed with the design that he changed his original script to change his main character’s job, from a worker in a factory manufacturing rockets into a taxi driver. The length of the Taxi is 5 meters. It is loaded with fake bullet holes on its right side. In each impact it remains pyrotechnics’ traces in order to simulate sparks and the violent attack that the taxi suffered in his flight.”

Who didn’t want a landspeeder? It was like a drop top corvette that never needs to touch the ground. It’s fast, smooth and looks incredibly fun to drive. In A New Hope, Luke Skywalker uses one to traverse the desert under setting suns, and it looks majestic.

There are a few different variations of landspeeders in the Star Wars universe. Skywalker had an X-34 landspeeder, the one he used to take Obi Wan to Tatooine. When they found Solo at Mos Eisley, luke sold it for 2,000 credits to help pay for passage.

Luke of course bemoaned the price, saying that since a new model came out the old ones didn’t quite sell as well. The landspeeder would go on to make several appearances over the years in different Star Wars properties, but those scenic desert drives will never be forgotten.

The Hell Cycle from Ghost Rider

Would this even be a list without a Hell Cycle? This incredibly badass motorcycle is used by Ghost Riders to exact vengeance and whatever other superhero-related activities need to be taken care of.

It was created by Mephisto and is powered by the fires of Hell. It also doesn’t need to obey the laws of physics, driving up walls and over water. In rare instances, it has the power of flight.

The Hell Cycle is like a live being; it comes when called and will follow every order from its Ghost Rider regardless of whether it’s nearby or not. Honestly not a ton of information is available about the cycle as its mainly just an extension of its rider. Still, it looks cool in all its forms.

The Lexus 2054 from Minority Report

One of the standouts of 2002’s Minority Report, besides Tom Cruise sprinting everywhere, is the really sweet Lexus he used to get around. It’s polished, aerodynamic, and fast as all get out.

Not a lot of people know that the Lexus 2054 is actually one of the company’s project cars, although the real life version never played music to match the mood of its driver. The futuristic car also followed voice commands and drove itself, so it’s basically a Tesla from the future.

Director Steven Spielberg actually asked Lexus to design a car for the film, as he was a Lexus owner himself. It was created by Harald Belker and eventually appeared in car shows and other public-facing events. There’s even a small-scale version of the vehicle that was produced by toy company Maisto. It was 1/24 scale and sold exclusively at The Sharper Image.

The Batmobile from The Dark Knight

It’s hard to count how many versions of the Batmobile are out there, but it’s even hard to argue that the one that appeared in The Dark Knight isn’t the coolest of them all. The Dark Knight trilogy gave us a more realistic take on the car, and it’s an absolute unit.

Colloquially, the vehicle is called a Tumbler due to the ability to flip around and keep driving. It can take a beating and has a number of weapons and special driving modes. The Joker transportation scene/car chase is one of the most cinematic and exciting sequences ever filmed.

When Batman turns the car into a motorcycle things really get interesting. He tears at the Joker full speed, and it’s a great moment that illustrates just how evenly matched these two are and how absolutely insane the Joker seems to be.

The best vehicles are used as narrative devices or at the very least serve as character extensions. The Batmobile is exactly that, no matter what iteration it’s in.