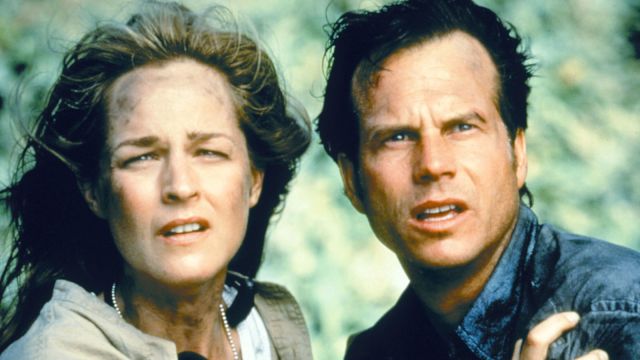 It’s taken more than twenty years, but a sequel to Twister is finally in development. Albeit, likely without its stars returning for the follow-up.

Amblin Entertainment and Universal are currently scouring Hollywood for some talent to join a potential sequel, with the 1996 disaster movie struggling to have its sequel hit any sort of solid ground. The death of star Bill Paxton in 2017 already cut off two options, with the actor also known for his directorial work on pictures like Frailty.

His co-star Helen Hunt is believed to be just in the “hopeful” category, with a report from Deadline suggesting the studios are not convinced they’ll be able to get her to return. It’s not all doom and gloom for the project though, with Steven Spielberg’s enthusiasm for a script leading to the film being suddenly fast-tracked.

Top Gun: Maverick director Joseph Kosinski was originally set to lead the sequel, but dropped out to work on a Brad Pitt-led Formula One movie for Apple. The loss of Kosinski is a huge one for reputation, with Maverick the highest-grossing film of 2022 by some distance.

Deadline’s report suggests a few names currently under consideration to take on the project, with the likes of Prey’s Dan Trachtenberg, Jimmy Chin and Elizabeth Chai Vaserhelyi, and animated film auteur Travis Knight. Fans question whether a sequel is even worth doing without Paxton, as he’s so crucial to the film’s limited charm. Add onto Paxton’s absence the death of Phillip Seymour Hoffman, and there’s arguably no point even calling the film a Twister sequel.

There’s no solid timeframe for the Twister sequel’s release, with it very likely to enter development hell if Hunt should not return, nor a director get hired.