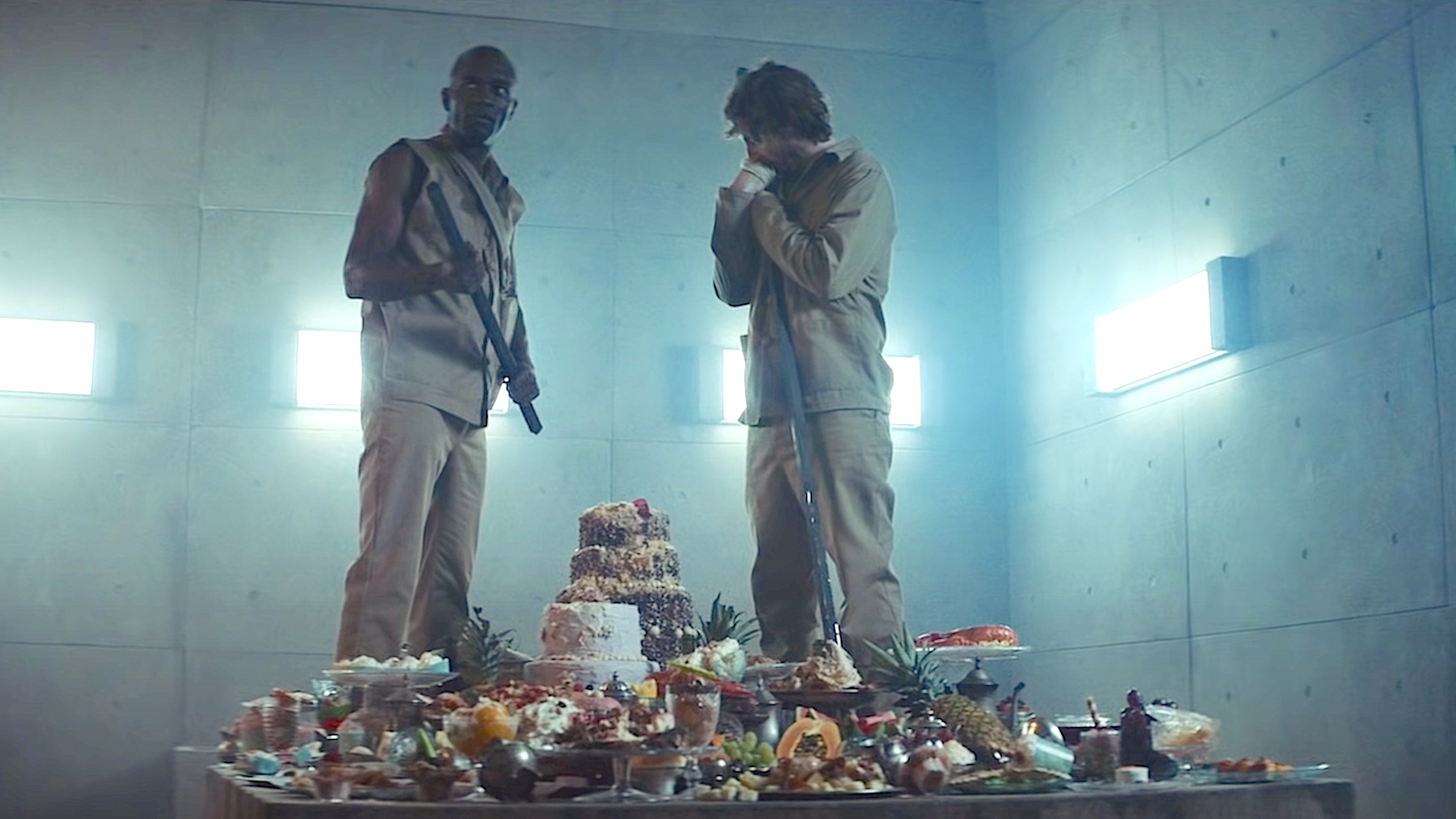 Goreng (right) and Baharat (left) on the platform

Warning: The following article contains spoilers for The Platform’s ending.

A platform descends into an abyss. It carries a feast of delectable dishes. The gourmet food contrasts with the disgusting nature of what occurs here. The platform stops at each floor of a tall, vertical building. Each level contains two prisoners of “the pit”, and every month, they are delegated to different levels. The fortunate few on the top floors will enjoy the succulent food, but the unfortunate on the lower levels will suffer. The farther the platform descends, the less food it has until it’s empty. Starvation, suicide, cannibalism, and murder are inevitable.

The Platform is a Spanish movie produced by Basque Films, directed by Galder Gaztelu-Urrutia, available for streaming on Netflix. It’s a bleak story of survival by any means and has been discussed on the internet as it provides commentary on ideologies such as capitalism, socialism, and anarchy.

Goreng is a man who elected to become an inmate in the pit. However, he didn’t grasp the hell in which he was about to be entombed. He wakes up on level 48 with a roommate named Trimagasi. The following month they wake up on level 171, and the camaraderie between them dies as Trimagasi detains Goreng with the intention of eating him. Goreng is forced to kill Trimagasi.

Trimagasi maintains that he was not responsible and that his actions result from social engineering facilitated by the people controlling the situation. While they were both victims of their circumstances, Goreng attempted to keep his humanity intact, and Trimagasi submitted to the pressures of the pit.

The following month, Goreng wakes up on level 33 to find that his roommate, Imoguiri, was part of the administration of the pit. She came to the pit to facilitate a “spontaneous act of solidarity” between the prisoners. She tells Goreng that there are 200 levels and that if everyone ate their portions, there would be enough food.

However, Imoguiri realizes that she has been lied to when they wake up on level 202. She kills herself, giving up on her life and her mission, but leaving her body so that Goreng can survive.

Goreng wakes up on level 6 and meets Baharat who he convinces to start a rebellion by riding the platform down and ensuring that people only take what they need. They fashion weapons and begin their descent.

Once Goreng and Baharat discern that they aren’t swaying the prisoners, they decide to send a message to the orchestrators on level 0 in the form of a panna cotta dessert.

Together, they protect the panna cotta, fend off attackers, and sometimes kill them. Once they make it to level 333, they find a young girl. And while they want to send the panna cotta back to level 0, they take pity on her and give her the dish. As she eats the panna cotta, Goreng understands that the message is not the dessert but the girl. Goreng sends her to the top, and the movie ends as she ascends.

The distribution of food reflects capitalism and socialism. In the beginning, it coincides with capitalism as the fortunate receive everything, and the ones below get what’s leftover.

The conclusion is deliberately ambiguous, and the audience receives no closure. However, there is closure for Goreng. The last line in the movie is said by a figment of his imagination in the form of Trimagasi. When he says, “She will succeed,” there’s a hope that change can start from the next generation and that while society is broken, it can be fixed.

But this movie isn’t only a commentary on ideologies but also an observation of human nature. It forces the audience to consider some disturbing questions. What would you do to stay alive? Would you resort to betrayal, murder, and cannibalism?

While the majority of us will thankfully never have to find out, it’s a thought-provoking subject that is bound to challenge the audience’s morality.