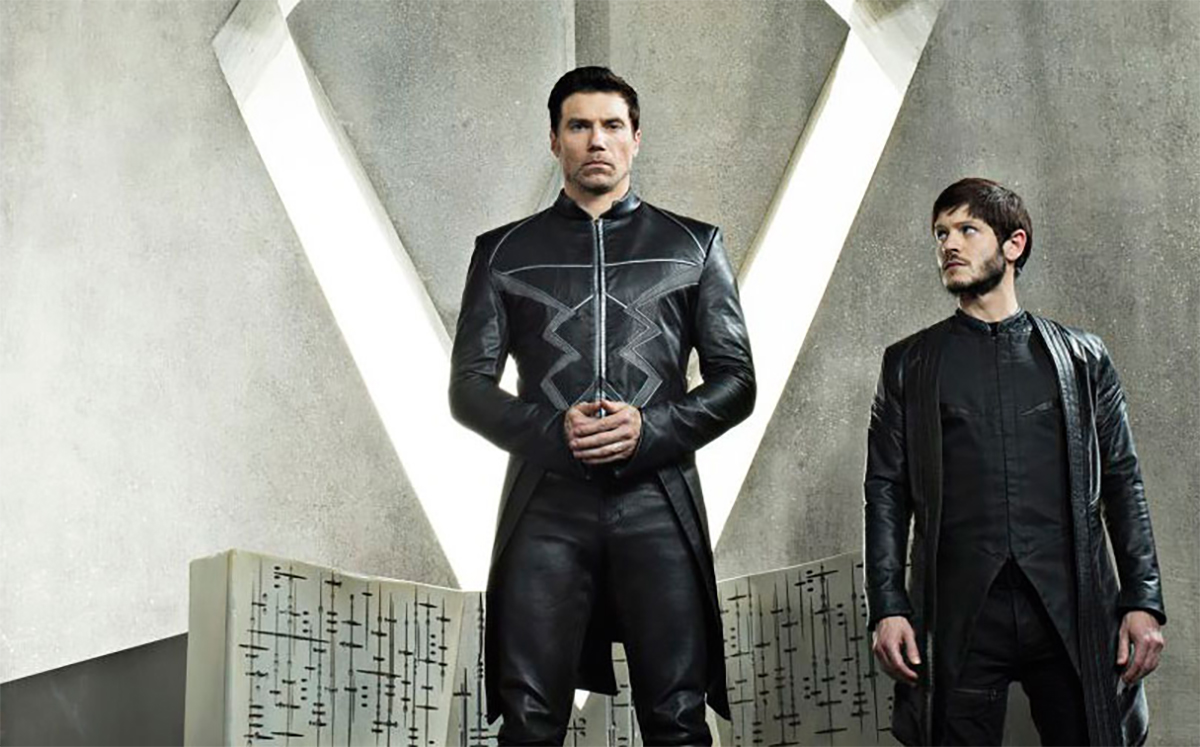 Not only does Black Bolt have one of the best names in Marvel Comics, he’s also one of its most important superheroes: leader of the Inhumans, a member of the Illuminati, a brilliant tactician, and in possession of one of the most potent weapons in the Marvel multiverse. These are all things you could have easily missed if you discovered the character through the Marvel Cinematic Universe (MCU.)

Black Bolt was created by Stan Lee and Jack Kirby in 1965, debuting in the pages of Fantastic Four #45. He is the ruler of Attilan, the Inhumans’ home for millennia that has been variously located in the Atlantic Ocean, the Himalayas, above New York City, and in current continuity on the Blue Area of the Moon. Like all his people, Black Bolt possesses extraordinary and innate powers.

Who are the Inhumans?

The Inhumans are a distinct group in the Marvel multiverse, although they have strong links to humanity, the warmongering Kree Empire, and the Eternals.

The Inhumans were forged in the Kree-Skrull War that raged millions of years ago. A Kree outpost on Uranus noticed the genetic potential in Earth’s emerging life left by Celestials. The Kree saw a chance to speed up their evolution and create a mutant army to gain an advantage against the shape-shifting Skrulls. Unscientifically, the Kree experiments stopped after a prophecy warned they could destroy the Empire’s Supreme Intelligence. It was too late. Tuk the Caveboy emerged as the first Inhuman around 50,000 BC.

Inhuman powers are activated and enhanced by exposure to a mist derived from Terigan Crystals. The mist mutates their genetic code, granting them incredible powers, although it can also cause deformities. These have led to a reclusive society that relies on selective breeding. Inhumans are not mutants; their mutations are built into their biology through ancient experimentation and not natural evolution. While the homo-superior mutants of the Marvel multiverse have had an uneasy relationship with homo sapiens since they emerged, Inhomo Supremis have enjoyed a civilization thousands of years before humanity.

Who is Black Bolt in the MCU?

You may think Black Bolt’s most distinctive feature is his clothing, including the symbolic tuning fork on his forehead. Created by Jack Kirby, it’s an iconic black suit complete with silver lightning bolts and wings that pop on the page but pose a challenge for live-action movies.

As fetching as that is, Black Bolt’s most compelling quality is that you’ll hardly ever hear him speak. His power lies in his voice. Activating the speech center of his brain triggers an electron-harnessing blast that can raze civilizations to the ground. Just one whispered word could decimate an army. The fork on his head helps him focus that power, and he rules from his throne through sign language or a spokesperson.

Black Bolt can channel his power into a mighty concussive punch called a Master Blow, although that leaves him severely weakened. If something evades or survives his power, he’s vulnerable. Still, his power has dented Thanos’ armor and fried the omega-level mutant Havok. He memorably used it against a vengeful Hulk in the opening issue of World War Hulk (although that Black Bolt was later revealed to be a Skull imposter.)

Lee and Kirby’s Black Bolt was a brilliant creation, with an ability that internalized conflict and speech in the character (thought bubbles are essential). As a king, the weight of his power and responsibility hits to the heart of Marvel superheroes.

It’s Inhuman tradition to place the genetically strongest on the throne, but Black Bolt was isolated from other Inhumans as a child until he could control his power. Speaking in his sleep could knock the Moon out of orbit, so he underwent rigorous mental training to keep his silence. Enforced quiet is a bold choice for a character on the page, but it shouldn’t pose too many issues translating to live-action adaptations despite lacking thought bubbles. After all, Marvel hasn’t tried to push Black Bolt into the Marvel Radio Universe. Even so, Black Bolt hasn’t had a happy time in the MCU.

The ‘Inhumans’ movie that didn’t happen

Inhumans was mooted as an MCU film for some time. It was even announced for the MCU’s Phase Three in 2014. Marvel Studios President Kevin Fiege talked about the strength of the concept that lent itself to a multimedia franchise, with its fascinating social structure, history, and range of astonishing powers. In the end, it was decided the format best suited an episodic series.

The ‘Inhumans’ series that did happen

An order of an eight-part series replaced Marvel’s Agent Carter and knocked Agents of S.H.I.E.L.D. to a half-season on ABC. Inhumans launched with a two-part opener screened at IMAX cinemas before airing on ABC in the U.S. It was the first television show to premiere on IMAX, with the corporation funding the first two episodes.

Hopes were high for Inhumans to join the MCU. Agents of S.H.I.E.L.D. had recently successfully introduced a very Earth-bound branch of Inhumans to the MCU in its second season. The show’s premise followed comic arcs by splitting the Inhuman Royal Family thanks to the plotting of Maximus, Black Bolt’s envious brother.

Portraying Black Bolt was Anson Mount, who deserves praise for taking on such an internalized character with focus and intensity. Unfortunately, Black Bolt was an odd fit for the fish out of water tale he was trapped in for much of the show. The production decided to keep his thoughts a mystery rather than build the show around internal dialogue. Inhumans also updated his biography to show he underwent Terrigenesis and gained his powers as a teenager. It may have been logical that Black Bolt didn’t know American Sign language, but it was still a missed opportunity.

Throughout the eight episodes of Inhumans, Black Bolt went from evaluating the chance of humans discovering Attilan to being transported to Earth for safety during Maximus’ coup. Separated from any other Inhumans, Black Bolt was stranded in Hawaii, arrested after shoplifting before escaping jail, and an attempt to harvest his DNA to bolster Maximus’ powers. An extended power struggle between the Moon and Earth ended with Black Bolt and his wife Medusa back on the throne, leading the Inhumans to a new life alongside humans.

In hindsight, Inhumans was more of a prototype for the Disney+ MCU series that followed than Netflix’s Marvel shows. Four years later, Disney has learned some lessons. Rotten Tomatoes records a jaw-dropping 11% approval rating for Inhumans, a rare but noticeable miss in the MCU catalog. With the show’s abrupt cancellation, it looked like the Inhumans’ live-action story was over.

The Inhuman in the Multiverse of Madness

* Warning: This section contains spoilers for Doctor Strange in the Multiverse of Madness*

Doctor Strange in the Multiverse of Madness is packed with surprises. There was the first appearance of the Fantastic Four’s Reed Richards/Mr. Fantastic (John Krasinski), the live-action realization of Captain Carter (Hayley Atwell), and against all odds, the return of Black Bolt.

Anson Mount returned, this time gamely sporting a comics-accurate costume. He appeared as part of the Illuminati, the secret society guarding the multiverse, until it was ripped apart by Wanda Maximoff/Scarlet Witch (Elizabeth Olsen). Black Bolt was her first victim, standing useless while Mr. Fantastic explained his devastating ability like a mid-rank Bond villain. When the Scarlet Witch hexed Black Bolt’s mouth shut, Black Bolt’s shock internalized his power and pulverized the inside of his head. It’s a shocking and horrible end for the Attilan king.

One saving grace is that we had seen the Illuminati in flashback, in the aftermath of defeating Thanos. Black Bolt was the chosen method for executing Earth-838’s corrupted Stephen Strange, killing him with two chilling words.

As it stands, Black Bolt has enjoyed a slight redemption in movie theaters, although his tuning fork was at the end of Doctor Strange’s sharp tongue and his journey ended with one of the most memorable deaths in the MCU. It’s worth noting that although they look the same, this was just one variant of Black Bolt and not necessarily from the universe of the TV show.

The Illuminati of Marvel Comics formed to make the decisions others couldn’t, drawing together the greatest minds of Earth’s protectors, each bringing a different quality to the superteam. Black Bolt wasn’t the only king — he was joined in the group by Atlantean monarch Namor the Sub-Mariner — but his membership reflected the importance of the Inhumans in the past and, according to Kree prophecy, events yet to come.

For that reason, no matter how tough Black Bolt has had it so far, you can’t rule out the Inhuman monarch appearing in the future and hopefully having a bit more luck.