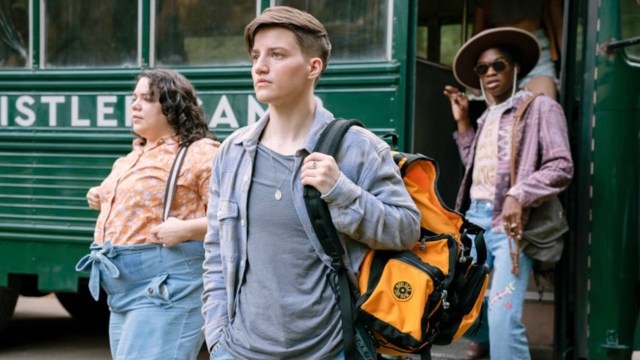 The latest slasher making waves is John Logan’s They/Them, which follows a group of LGBTQ+ teenagers trying to survive against a masked killer at a conversion camp. Theo Germaine is a featured member of the younger cast, and has shared that they are extremely grateful for how queer experiences were showcased throughout the film.

In an interview with The Hollywood Reporter, Germaine, who plays the role of Jordan, highlighted the unique ways queerness was represented through each character’s fight to survive.

“This movie really feels like it’s kind of standing alone in a sense and it feels like it is a new foray or exploration into how we do good representation on screen. You really get to see the humanity in all of these characters, these campers. I feel all the people that are suffering and struggling are really portrayed in a positive light, but it doesn’t feel like it’s two-dimensional. As someone who’s consumed a bunch of media, I really liked that Jordan gets to be the hero. I really like that there are characters who are queer that are in denial at the beginning of the film and are really actually interested in changing who they are because they think it’s not OK. And then they feel maybe a different sort of way, by the time the film is over. I really appreciate the way that all of these characters experienced survival throughout the film. It doesn’t feel like anybody gets sacrificed, which I think is a thing that is kind of a horror device.”

They also spoke about the way writer and director Logan took a lot of leaps with the script, not afraid of venturing away from regular slasher tropes.

“There’s also a lot of tropes that happen in horror, and it’s like, if this happens in a movie, then this character is probably going to die. If they split up, this person is probably going to die. All of these tropes are addressed in this movie, almost in an exploratory or academic way. Because the director, John Logan, is very much a horror aficionado. He takes all of these tropes and then he’s like flip, flip, flip — he flips everything. The result is this weird haunted, kind of beautiful thing on screen that I truly feel I’ve never seen before. Another thing that I really think makes the film stand alone and I hope will provide a source of inspiration for future films is having a bunch of queer people making a film — even if it’s something that is more in the realm of heteronormativity — and involving queer and trans crew members and actors and creators.”

They/Them was released on Aug. 5 on the streaming platform Peacock, and has received mixed reviews. However, the inclusivity and representation have been praised.