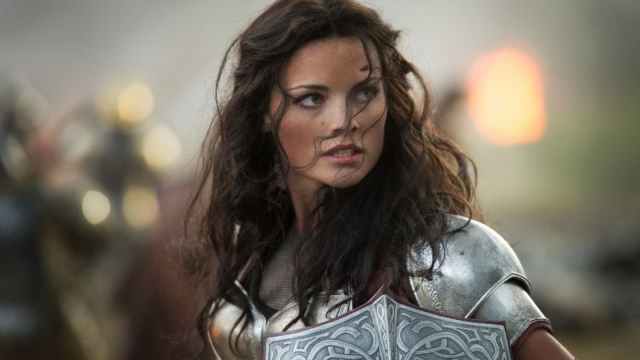 Thor: Love and Thunder is the newest film in the Marvel Cinematic Universe to land in theaters. The film was directed by Taika Waititi and is the fourth entry in the Thor franchise with Chris Hemsworth returning to play the titular character.

Another character who returned in Thor: Love and Thunder was Lady Sif, played by Jaimie Alexander. Lady Sif did not return for the previous installment in the franchise, Thor: Ragnarok, but has appeared in different projects across the MCU, including the Disney Plus series Loki, the animated series What If…?, and even two episodes of Agents of S.H.I.E.L.D.

But with Gorr the God Butcher — played by Christian Bale — wreaking havoc amongst the Gods, did Lady Sif manage to survive her appearance in this film?

Does Lady Sif die in Thor: Love and Thunder?

When Thor and the Guardians of the Galaxy are looking for distress calls to go and help with, Thor notices that one of them is by Lady Sif. Distressed that his old friend is in danger he bids goodbye to the Guardians of the Galaxy, takes Korg, and journeys right to her. When they get to the planet the pair find themselves too late. Gorr the God Butcher has already killed one God and left Lady Sif for dead.

Thor and Korg rush to Lady Sif to discover that she has lost an arm in the battle. But Sif is content with dying from her wounds, as she thinks it will grant her entry into Valhalla, so she tells them to let her die. Fortunately for her, Thor informed her that to be granted entry into Valhalla, you needed to die in the midst of battle, not after it.

So Thor and Korg took Lady Sif back to New Asgard where her wounds were tended to and she successfully recovered. As she was recovering from her injuries for most of the film she didn’t participate in any of the fights, so other than losing an arm Lady Sif made it out of the film unscathed. She was even in a montage at the end of the film where she trained Axl, Heimdall’s son.

Hopefully, Lady Sif will have a larger role in the MCU moving forward. If her appearance in three different MCU projects in the last few years is a sign, then she most likely will. For now, we will just have to make do with her appearance in Thor: Love and Thunder.