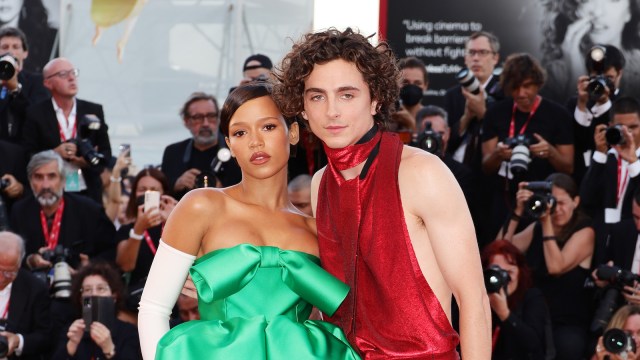 One of the more disturbing (or entertaining, depending on your proclivities) movies to come out recently is the cannibal love story Bones & All, starring Timothée Chalamet and Taylor Russell. The movie is gory, to say the least, with explicit scenes of people eating people. So how did they do it?

It apparently took a lot of practical effects to make it look like the two were munching on actual human beings. In an interview with Slash Film, Russell revealed what was actually happening in those scenes.

Despite the food being dark and gross looking, it was also apparently delicious.

“On a very practical note, Luca said that we were eating corn syrup. But I know that I wasn’t, because I remember the incredible effects team and the team who were handling all of that sort of stuff told me that it was maraschino cherries, dark chocolate, and Fruit Roll-Ups. If that sounds good to you, cool. If it doesn’t, fair enough. But it was very sweet and [tastier] than anything else maybe you could imagine.”

The movie is the second collaboration between director Luca Guadagnino and Chalamet. The pair previously worked together on the Oscar-winning Call Me by Your Name. That movie, like Bones & All, centers around outcasts. Guadagnino told GQ he enjoys stories about people like that.

“I think that to be in the shoes of someone who is at the margin, it gives you a privileged point of view. I want to see the world from the perspective of someone who doesn’t conform. I think conformity is really the thing that makes me uncomfortable.”

Bones & All tells the story of 18-year-old Maren who feels out of place in the Reagan era. In the first scene of the movie, she realizes she has a longing for human flesh. Her dad leaves and she goes on the road with her mom and soon meets Chalamet’s character Lee.

The director said despite the premise of the movie, it’s a love story at heart.

“They have this revolutionary aim not to become the people they meet, and try to survive through love,” Guadagnino said.

Chalamet previously spoke about how cannibalism is featured in the movie and what it means.

“For me, it felt like the cannibalism was a metaphor for what your ancestors leave you with — your immediate parents, but also the trauma that you’ve lived with from generations past. You wrestle with that. Sometimes it’s something you can actually overcome and break the cycle. And sometimes a curse remains a curse and a blemish remains a blemish.”

Yup, a curse is a curse, whatever that means. Bones & All hits theaters on Nov. 18.