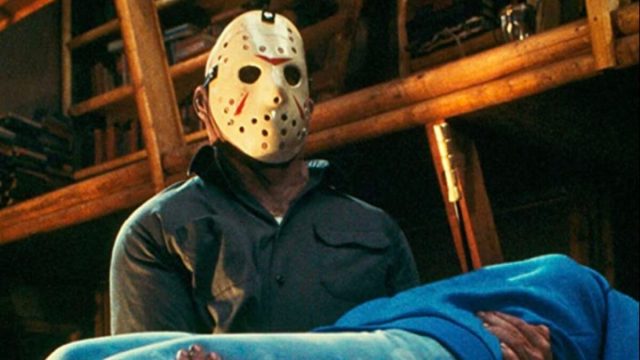 For some reason, horror and comedy go together like a knife and a gun – either is fine but having both is better. One of the benchmarks of a good horror/comedy movie is the deaths. They have to be over-the-top, hard to recreate in real-life situations and hopefully incredibly gory.

A lot of movies claim to want to make you laugh and cry, but a good horror movie will make you laugh and want to die… from the spooks. It’s a cathartic experience that when done well can give you the absolute best of both worlds.

So what tops the list of over the top deaths in the campiest horror movies? Let’s find out!

You can learn a lot from a name. In the case of Ghost Ship you learn very little. Is it a ship that’s a ghost? Is it a bunch of ghosts on a ship? Is it a paranormal shipping company? Who knows.

This 2002 film directed by Steve Beck features the classic tagline “Sea Evil.” So, you know it’s something, at least. It starred Gabriel Byrne, Julianna Margulies, and a pre The Boys Karl Urban.

However, none of those stars show up in what has to be one of the most hilarious and gory opening scenes of all time. A group of well-to-do people are dancing aboard the MS Antonia Graza as they dance to the song “Senza Fine”.

Then there’s a hand that flips a switch that tightens a wire cord until it can’t be tightened anymore and snaps. The wire then fires off and cuts everyone on the dance floor in half. And it’s not instant, either.

Beck lets you sit for a moment and allows everyone a few last breaths before their blood starts plopping onto the deck of the boat. In some crude 2002 CGI, we see bodies and heads sliding off of their bodies. It’s way over the top and almost too gory to be scary. Still fun regardless.

Interestingly, The Mythbusters tried this out to see if it was possible. They found it was not, but they also didn’t use mooring lines made of nylon; they used wire rope.

Would any list of hilarious horror deaths be complete without a Final Destination nod? While there are five movies, nine books and two comics in the franchise, some deaths stand out. Sure, some are more realistic than others, but the lack of realism is what really gets the old laugh meter going.

Take, for example, a scene from the classic 2003 film Final Destination 2. Directed by David R. Ellis, this movie picks up about a year after the first film (which was a surprise hit for its time). This movie was no slouch either, earning $90 million on a $26 million budget.

The premise was pretty simple. A girl named Kimberly Corman has a premonition about a car pileup and stalls the car at the entrance to the entrance ramp, saving a bunch of people. She learns that the only thing that will save the people who die is to… honestly it doesn’t matter.

The best, most hilarious death on this one involves an apparent lack of bones for one of the victims. Tim Carpenter (played by James Kirk), one of the people supposed to die in the pileup, narrowly escapes death a few times before meeting a simple end: a large pane of glass crushes his body – turning it into a sort of goo.

Did Carpenter not have bones? The way he’s crushed is exceedingly hilarious and over the top. Ironically, if Kimberly never tried to warn Tim and yelled “pigeons”, which for some reason caused him to scare a bunch of pigeons and start a chain reaction causing his death, he may have somehow survived.

The aughts were a good time for hilarious deaths and also not a great time for actual horror movies. Case in point, Thirteen Ghosts, a 2001 film directed by a man named Steve Beck who directed another ghost-related movie we mentioned higher on this list.

This death also features, you guessed it, someone getting sliced in half. This time, it’s a greedy ghost-antagonizing lawyer named Ben Moss. I’m not going to get deep into the plot of this movie because it’s super convoluted (something audiences and critics agreed with).

Just to touch on it, there’s a mansion made of glass that houses 12 ghosts and there are spectral glasses that allow people to see them. Moss plays a pretty stereotypical aughts lawyer – greedy, white and wearing a suit.

He inadvertently triggers a mechanism that releases the ghosts and is cornered by a woman ghost whose nipples are visible for some reason. He keeps backing up until he’s in the perfect position for a sliding glass door to cleave him in half.

Because this is the work of Beck, there’s a few moments between the cutting and the actual death where the lawyer is seemingly cognizant of what’s happening to him. Suffice to say, the movie didn’t exactly tear up the box office, but it did eventually recoup its budget, and it remains a curiosity today.

The Last House on the Left – Microwave Head

There’s no denying that The Last House on the Left is one of the most gruesome horror movies ever. Not because of anything supernatural, but just the bloody violence and depravity. It’s more of a revenge horror story than a “boo” horror story.

The plot of this one is pretty brutal. Two girls end up in a motel room smoking weed with a stranger when some shady people come in and ultimately decide to kidnap the girls. One gets killed and one gets raped and shot in the back. She somehow survives.

Anyway, the brutal hilarious scene involves a microwave. The raped girl’s dad paralyzes the main bad guy telling him “I didn’t have any rope or zip ties.” Here’s where it gets ridiculous – he places the man’s head in an open microwave and starts it.

Sure, microwaves don’t work like that but whatever. Then his head explodes, which honestly, while impossible, is still pretty funny.

Is there a better type of funny than unintentionally funny? By the time the Friday the 13th movies hit the eighth sequel, things were starting to get repetitive and more difficult to keep scary. Part eight is one of the most guilty of feeling like the franchise is losing steam.

In this 1989 campy outing that is definitely not in the conversation for best Friday the 13th movie, Jason murders his way through Manhattan. There’s a lot of over-the-top deaths in this one. At one point, someone is murdered with a hot rock from a sauna. Another is drowning in toxic waste.

The most (unintentionally) hilarious death is one where Jason chases a victim onto a roof. The kid is apparently a boxer and decides to take Jason on with his fists. He gets a few shots in and Jason seems to back up a little with each punch. He quickly loses steam and tells Jason to “give me your best shot.”

Jason punches him so hard his head flies off and lands ceremoniously in a dumpster, which shuts closed for emphasis. I’m going to go out on a limb here and say that the sight of a head rolling off the building doesn’t give the impression the director thinks it does. Unless the director was going for comedy.

The animal horror movie has a storied history in the annals of film. Jaws is obviously one of the benchmarks, so in 1999 they made a Jaws movie that was different enough so as to not be compared to it.

Deep Blue Sea was about a group of super smart sharks attempting to escape into the ocean but also kill everyone on a secret underground research facility. At some point when things are going absolutely haywire and things feel hopeless, Samuel L. Jackson does what he does best and delivers an inspired monologue that unites the group and makes them feel like ‘you know what we can get out of this.’

Then a shark jumps out of a pool nearby and eats him. It’s supposed to be shocking and scary but 1999 CGI wasn’t very good and it looks, well, it’s hard to not laugh at it.

Troll 2 – The Best Worst Acting Ever

Hard to call this one a horror movie although it’s definitely trying to kind of be one be one. This 1990 sequel (people wanted a sequel?) featured a whole lot of goblins but hilariously not a troll in sight.

There’s some discussion as to whether the movie was supposed to be a comedy or not, but that’s not why it makes the list. The beauty of this cult classic comes into full fruition during a scene where a woman is turned into a plant for the goblins to eat.

Arnold, the main character in the film, watches the woman die with what is probably the most emotionless face of any actor ever. Then, like revving up a lawnmower, he says the classic line: “Oh My Goooooood!” The extra Os are for emphasis.

Of all the things on this list, this is maybe the best. Enjoy.