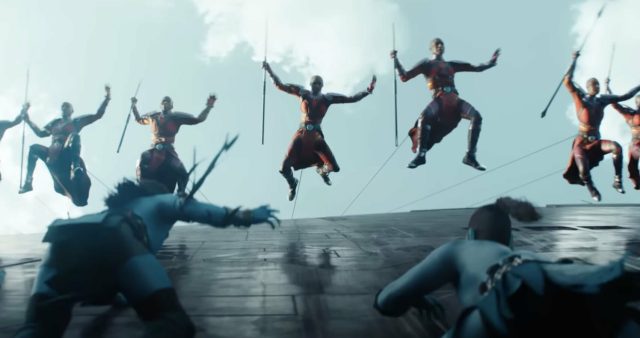 In just a matter of days now, Black Panther: Wakanda Forever will be upon us, bringing with it familiar and unknown faces in equal measure. Already, one of the higher-profile actors making their debut in the MCU with Wakanda Forever is open to fronting their own film, and, now, another rookie in the series says she’d embrace a specific Marvel project with open arms if it were to ever materialize.

Namora actress Mabel Cadena makes the comments about her character popping up in a hypothetical Agents of Atlas spinoff alongside Randall Park’s Jimmy Woo in an interview with Screen Rant. She says there are no conditions for her joining, and even went so far as to address Kevin Feige and Victoria Alonso directly, with the hopes that she’ll eventually receive a call from either with some good news to share.

Within the cinematic universe, other members of the team, which mainly consists of Asian figures already introduced, include Shang-Chi as well as Cindy Moon. Marvel is also introducing others in the non-canon Spider-Man: Freshman Year project, so, it is possible more could come from this, or things could change behind the scenes and go in a different direction as productions often can.

Black Panther: Wakanda Forever also features Tenoch Huerta as Namor. Some of his actions in the piece are likely to draw the ire of audiences, though they have been defended by others in the film. As well, the project will firmly move on from Chadwick Boseman’s T’Challa and, in our review of the film, we gave it four stars out of five. For WGTC’s Alejandra Martinez, it marries spectacle and heart, some parts are formulaic, but the characters and their nuances along with those in the story shine a lot.

You can read more about what Martinez thinks here.