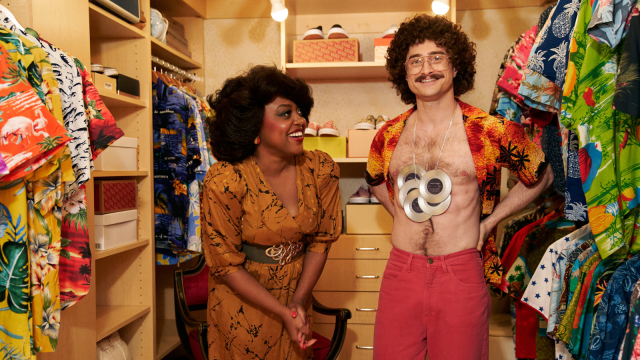 Photo via Funny or Die

The marketing machine for Weird: The Al Yankovic Story is in full swing, and the titular parody musician himself is sharing how you can score yourself a free screening of the film.

If you simply can’t wait until the Weird Al biopic starring Daniel Radcliffe hits the Roku Channel on Nov 4, you’ll be able to catch it on the big screen at Alamo Drafthouse Cinemas before its release.

The offer is available to residents of Los Angeles, San Francisco, New York, Austin, Dallas, or Denver. If you live in one of those cities, you can snag yourself a seat at a free Victory screening by purchasing a food and beverage voucher from 11:00am PST tomorrow.

The screening will also involve a Q&A livestream, so you’re getting plenty of bang for your food and beverage voucher buck.

If that’s not enough Weird for you, the Roku Channel is giving away some snazzy-looking Weird Al-themed Vans in a Twitter campaign.

Daniel Radcliffe plays the titular musician in Weird: The Al Yankovic Story, which is described as ‘the unexaggerated true story about the greatest musician of our time’. It will cover his upbringing and how his career of parodying pop music came about, and all the absurd twists and turns along the way.

The cast will also feature Evan Rachel Wood and Rainn Wilson, among a whole lot of other big names. The film is coming to the Roku Channel on Nov 4, 2022.