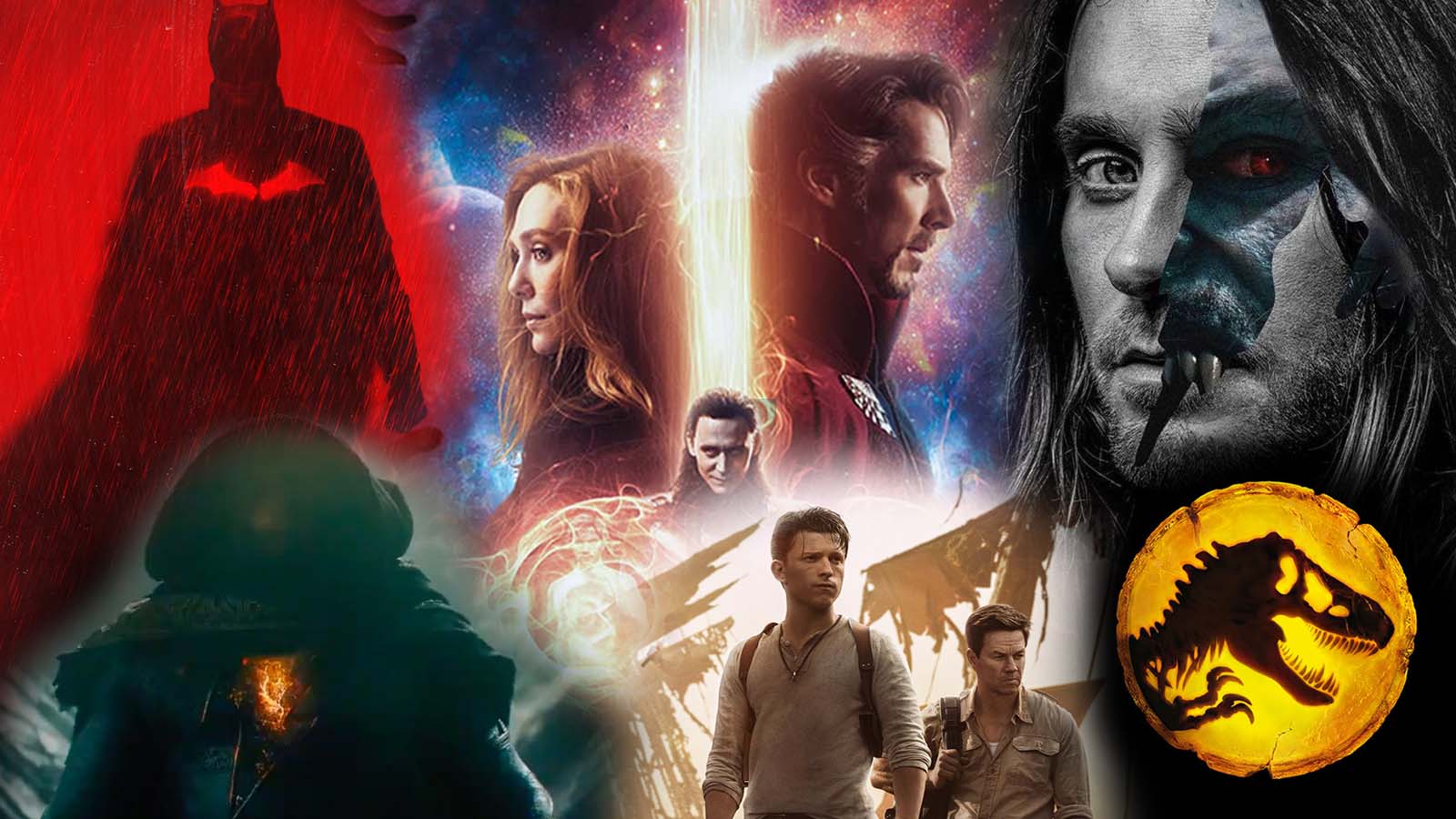 After a wild and unpredictable 2021, dedicated moviegoers and film fanatics certainly have a plethora of films to look forward to in 2022. With the emergence of COVID-19 drastically impacting the world of cinema from 2020 onward, an abundance of joy and hope was felt when films like Spider-Man: No Way Home and Dune reinvigorated the box office in 2021.

While no one can completely predict how well these upcoming movies will perform, the excitement swirling around them is enough to keep fans in great anticipation. From action-packed new outings to intriguing sequels and reboots, here’s a list of the top 10 movies we can’t wait to see this year.

Based on the beloved video game series of the same name, Tom Holland stars in Uncharted as Nathan Drake, with Mark Wahlberg portraying his mentor, Sully. Despite recent video game film adaptations garnering their fair share of criticism, the combined star power of Holland and Wahlberg promises fans a comedic and action-packed new adventure that could easily become its own franchise.

Matt Reeves’ The Batman is arguably the most anticipated movie of 2022. Starring Robert Pattison as Bruce Wayne/Batman, the awaited action feature looks to add a darker element than prior Batman films. The engaging plot follows Batman in his second year of fighting crime on the Gotham streets, during which time he encounters the Riddler. Moreover, the upcoming film includes a star-studded cast, including Zoë Kravitz as Catwoman, Paul Dano as the Riddler, Jeffrey Wright as James Gordon, Andy Serkis as Alfred, and Colin Farrell as the Penguin.

While Marvel fans were initially expecting to see this film on Jan. 28, an April release has officially been announced for Morbius. Regardless of release date, fans are still pining to see the anticipated movie grace the silver screen once and for all. Oscar winner Jared Leto stars as Michael Morbius, a scientist with a rare blood disease who inadvertently transforms into a vampire. Moreover, the assumed hero must grapple with his own morals in a battle of right vs. wrong.

Morbius is scheduled for release on April 1, 2022.

Fantastic Beasts: The Secrets of Dumbledore

It’s certainly no secret that the Wizarding World is one of the most successful franchises in the world. As a result, fans are eagerly counting down the days until the newest installment in the Fantastic Beasts series arrives. The upcoming movie is set years after The Crimes of Grindelwald, with Newt Scamander (Eddie Redmayne) under the guidance of Albus Dumbledore (Jude Law) as the plot further explores the fundamentals of the Wizarding World, including a clash of armies.

Fantastic Beasts: The Secrets of Dumbledore releases on April 15, 2022.

The Marvel Cinematic Universe remains one of the most popular film franchises of the modern generation, with three significant films set for release in 2022. Following the events of Spider-Man: No Way Home, Benedict Cumberbatch’s Doctor Strange must stop the overall multiverse from total decomposition. The upcoming movie features an all-star ensemble cast including Elizabeth Olsen as Wanda Maximoff, Benedict Wong as Wong, Rachel McAdams as Christine Palmer, and Chiwetel Ejiofor as Karl Mordo.

Doctor Strange in the Multiverse of Madness is scheduled for release on May 6, 2022.

Both the early Jurassic Park films and Jurassic World trilogy provide an endless selection of action-packed films documenting the disasters that come with the decision to clone dinosaurs. Jurassic World: Dominion is set four years after the events of Jurassic World: Fallen Kingdom, where the entire world must adjust to freely-roaming dinosaurs. The film boasts an ensemble cast that encompasses all of the Jurassic films, including Chris Pratt and Bryce Dallas Howard as well as veterans Sam Neill, Laura Dern, and Jeff Goldblum.

Taika Waititi’s Thor: Love and Thunder once again brings the charismatic God of Thunder, played by heartthrob Chris Hemsworth, to life. As a direct sequel to Thor: Ragnarok, very little is known about the plot itself. However, its star-studded cast gives fans something to undoubtedly be excited about. The stellar lineup includes Tessa Thompson as Valkyrie, Natalie Portman as Jane Foster / Mighty Thor, Christian Bale as Gorr the God Butcher, and Chris Pratt as Peter Quill / Star-Lord.

Intended to be a spin-off of 2019’s Shazam!, Dwayne Johnson has fans eagerly anticipating Jaume Collet-Serra’s Black Adam. Johnson stars as the film’s titular character, the ancient prisoner antihero with a score to settle as the archenemy of Shazam. The inclusion of The Rock’s name immediately sparked a divine interest from fans, with enthusiasm only continuing as the release date rapidly approaches.

Spider-Man: Across the Spider-Verse (Part One)

The upcoming computer-animated superhero film reigns as one of the most anticipated movies of 2022. The movie will serve as a direct two-part sequel to Spider-Man: Into the Spider-Verse (2018), which was ultimately regarded as one of the most favored film releases of 2018. The popularity surrounding the franchise is surely enough to persuade fans into writing the release date on their calendars. Starring Oscar Issac, Shameik Moore, Hailee Steinfeld, and Jake Johnson, the movie is one that fans of the original can’t wait to see.

One of the most anticipated movies of 2022 has sparked a wave of controversy surrounding its main character. As many fans are aware, the unfortunate passing of Chadwick Boseman in August 2020 was a major loss to family, friends, and fans who adored him greatly. Nevertheless, Black Panther: Wakanda Forever vows to celebrate and highlight the breathtaking performance and credibility that Boseman brought to the character. The upcoming installment will feature a glorious cast including Lupita Nyong’o, Danai Gurira, Martin Freeman, Winston Duke, and Angela Bassett.

Here are a few more highly-anticipated movies we’re looking forward to this year: