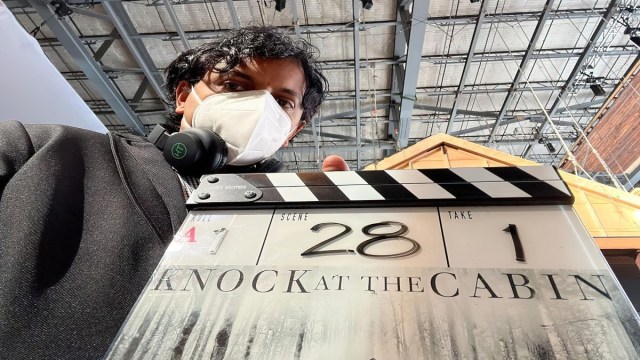 M. Night Shyamalan is the king of creepy and the master of the macabre. From The Sixth Sense to Signs, Shyamalan has been capturing our imaginations, and our nightmares, for years. With his next hit movie, the thriller Knock at The Cabin, just around the corner, we are sure it will be nothing less than horrifying.

Unlike many of Shyamalan’s other masterpieces, this one did not develop inside his own twisted little mind; it is actually based on a book, The Cabin at The End of The World, written by Paul G. Tremblay. While it is certainly not unusual to have a movie adapted from a book, what fans noticed that was a bit unusual was that the book wasn’t credited in the trailers.

M. Night Shyamalan released the trailer for his new movie premiering in February of 2023, and fans had a big reaction. The movie will be starring none other than Harry Potter’s own Rupert Grint, who played lovable goofball, Ron Weasley, so the movie is garnering a lot of attention. The tweet itself got over 800 comments, but not all of them were glowing as several fans couldn’t help but notice that the trailer said nothing about the book the movie is based on.

The trailer follows the story of a small family with dads Andrew and Eric along with their young adopted daughter, Wen. They head off to their dream vacation, a cabin in the woods, that will quickly become their worst nightmare. A group of three strangers appears, and after capturing the family in the cabin, tells them that they are there to stop the apocalypse and a decision has to be made. It’s anyone’s guess what the decision is. From the looks of things, we are sure it will not be a pleasant one.

The plot is adapted from Tremblay’s book which was published in 2018. The book was a hit, as other horror big wigs such as Stephen King and Andrew Liptak gave it rave reviews. When King gives a book a thumbs up, you know it’s going to be amazing, in a horrifying, you-might-never-sleep-again kind of way. Clearly the book’s plot is quite memorable. It’s so memorable that fans recognized it right away in the trailer and wondered why it wasn’t credited.

Surely the book is credited in the actual movie itself, and it is no secret in the general advertising that it is based on the book. With big names like Grint and Shyamalan associated with it, surely all crediting I’s have been dotted and T’s crossed overall, but it is certainly confusing as to why that wasn’t mentioned in the trailer itself, and fans of the book certainly noticed.

Yikes. You know what they say: everybody’s a critic. With M. Night Shymalan’s level of success, it’s no wonder he has a few naysayers in the bunch. If he wants to save himself (and everyone else) a headache, maybe next time he will give credit where credit is due and include the name of the actual writer of the story in the trailer. It sure would have gotten fewer hate tweets if that had been the case. Aside from that, we can’t wait to see what these two twisted minds have come up with, in this horrifying new thriller, coming to theatres Feb. 3, 2023, just in time for Valentine’s Day. Perfect.