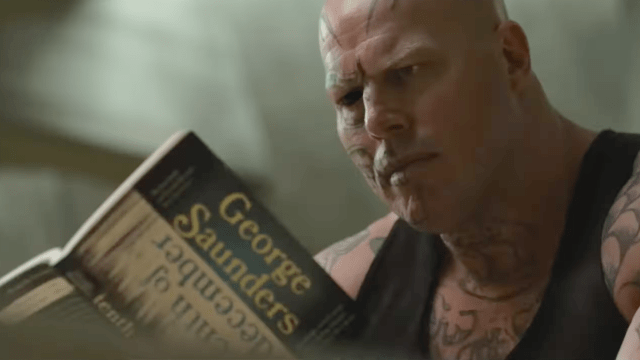 The frenetic, sci-fi prison flick offers up narcissistic humor, some beautiful scenery, and a kick-ass soundtrack. Ok, so maybe it’s not actually all that deep, but it still makes for an entertaining watch — if you can get past the icky sex scenes — and discussion afterward of “I knew that was gonna happen,” and how it reminds you of Philip K. Dick.

But, for the intellectuals, or the lit-curious, Saunders as a source of inspiration and ingenuity isn’t anything new. The longtime author has been penning short stories and eclectic award-winning tales for decades now, but those new to his name might be looking for his novels and books across the web only to find collections. Incredibly engaging, engorging, immersive, and eclectic collections at that, well worth digging into the same way Dick’s short stories and even Kurt Vonnegut’s short stories, including Welcome to the Monkey House, can give your mind a full-length feature’s worth of adventure packed tightly into immaculately penned material.

The current Netflix movie is based on only one of Saunders’ short stories, the “Escape from Spiderhead” story he penned for The New Yorker that was published back on Dec. 12, 2010. The story was released as part of the award-winning collection dubbed Tenth of December.

In total, Saunders, who Time called the best short-story writer in English, has released five collections of his short stories and one proper novel.

Well, would you look at that! Saunders released a new collection of stories just this year.

It’s his first release in 10 years, not including a novel in that timeframe, that captures the best of the best of Saunders’ storytelling all in one place.

The collection of new material contains stories ranging from existential crises to brainwashing, haunting dreams, and a dystopian future society. Oh, and a Hell-themed underground amusement park story set in Colorado as well.

The first and only novel written by Saunders was the bestseller on the New York Times list just weeks after its release.

The story takes place largely takes place as a fictional account of historical events, mixing Abraham Lincoln and the Civil War with some supernatural elements added in. We hate to compare, but think a little along the lines of how Vonnegut took real stories and events in history and added in some fantastical elements, and so on.

After its release, star couple Nick Offerman and Megan Mullally intended to make a film version of the book but that never came to fruition.

The duo took part in the audiobook adaptation of the novel, though, as did many more well-known names such as Ben Stiller, Bill Hader, Keegan-Michael Key, Jeff Tweedy, Julianne Moore, Don Cheadle, Rainn Wilson, and Susan Sarandon.

If that’s any indication, imagine how exciting it is to go all-in on the ride of a Saunders story.

The New York Times did publish a VR film of the book as an accompaniment.

Sure to be the most well-known collection of compiled Saunders’ stories following the Netflix film, these tales were written between 1995 and 2012 and were published in January of 2013. It was named one of the 10 Best Books of 2013 by the New York Times Book Review.

Furthermore, as recently as 2019 The Guardian named it the 22nd best book written since 2000, and there were a whole lot of books written in that 19-year span.

The collection contains 10 stories — seven from The New Yorker, two from Harpers, and one from McSweeney’s.

The mere fact that Saunders was sought after for his entrancing original works for so long should cue you in to the fact that his material is worth reading — regardless of how you feel about Spiderhead.

Bringing together 12 of Saunders’ best stories from 1999 to 2005, this book shows that the author really puts together quality work consistently.

The collection takes on consumerism and commodities in a unique way — full of humor and lightheartedness — that masks the underbelly of reality that can peck away at a person’s soul.

Take some slapstick and add that element of familiarity of your own existence and recognition of the American dream in the ‘90s and 2000s, and you’ll be chuckling to yourself while doing a slight repetitive nod of recognition that transports you back.

Funny enough, the tale of Pastoralia was the influence behind and origin for the GEICO Cavemen.

In the short story, the two characters work as “cave-people” at a theme park that’s failing.

Seven years after its publication, Entertainment Weekly named it 63 on the list of the top 100 works of literature since 1983.

The book brings together seven of Saunders’ earlier works, ranging from 1992’s story that draws the name for the book and appeared in the Kenyon Review, to 1995’s “Bounty”, which was published in Harper’s.

After its release, Saunders caught on as an astounding satirist and wordsmith, landing him the steady gigs that gave him an outlet for decades to come.

A bit more raw and more inventive, the stories show Saunders not just finding his voice, but finding deeper and deeper layers to the way he can tell a story, round out characters, and make a lasting impact on the reader without needing hundreds of pages to get there.

Two of his stories from this collection won the National Magazine Award for Fiction — “The 400-Pound CEO” and “Bounty”.

After its release, reviewers saw the diamond with a few rough edges emerging, calling Saunders things from quirky to a savage satirist, graceful and funny, dark and authentic, all at once.

For the uninitiated on Saunders work, you now have a treasure trove from which you can collect a bounty of intelligently provocative, ruthlessly funny, and exquisitely thought-provoking stories to plunge into.