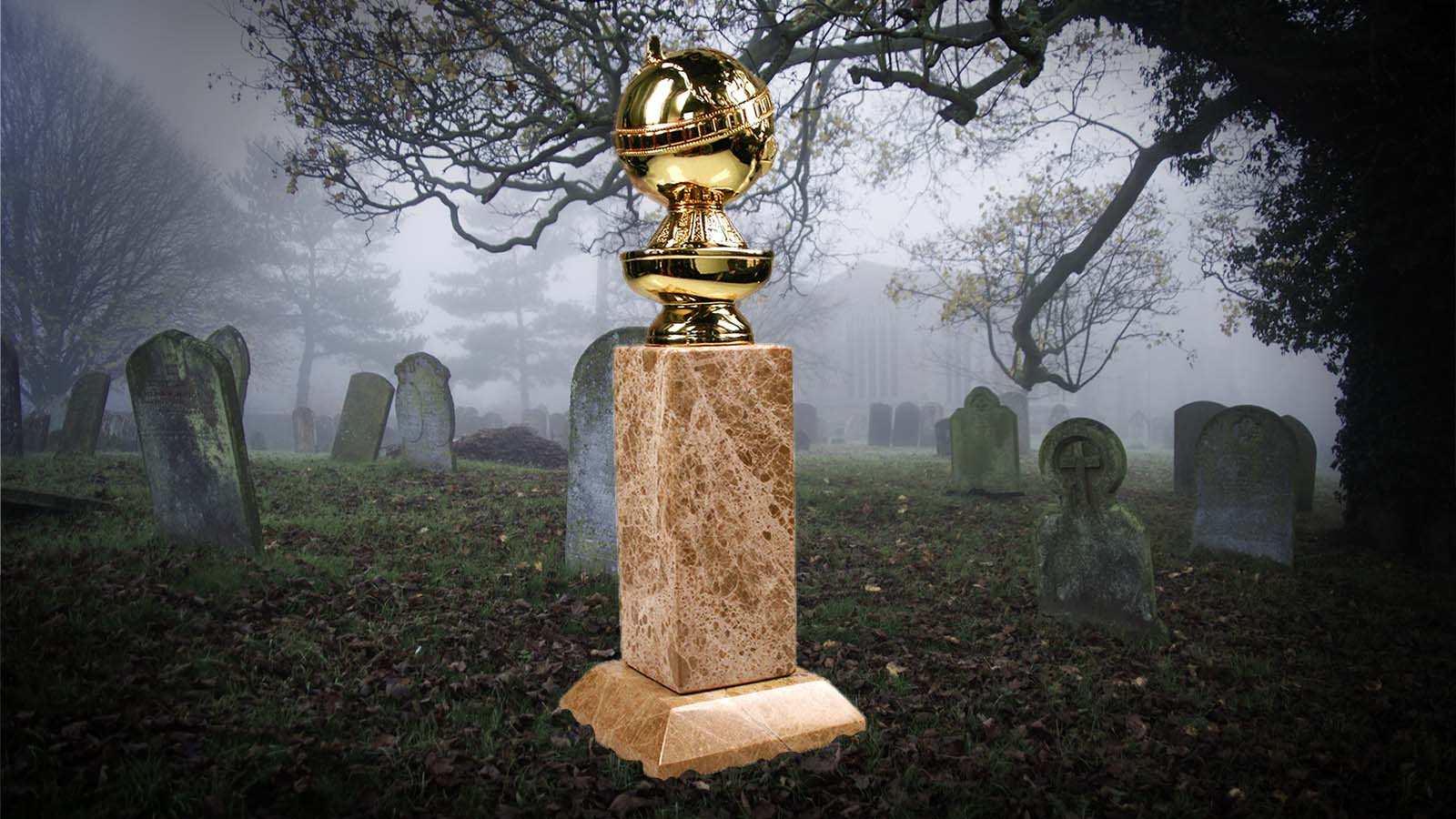 The Golden Globes will not be televised.

The awards ceremony has long been seen as the precursor to each year’s Academy Awards, and while it’s still taking place, there won’t be a 2022 Golden Globes ceremony — at least, not in any of the ways you’d recognize. There will be no live audience, no press, no red carpet, and no round tables occupied by fashionable celebrities getting noticeably tipsy. (But on the bright side, no cringeworthy jokes from Ricky Gervais, either.)

While NBC owns the exclusive rights to a broadcast, the network declined to air this year’s ceremony. According to a statement from the HFPA released Thursday, “This year’s event is going to be a private event and will not be live-streamed. We will be providing real-time updates on winners on the Golden Globes website and our social media.”

While the ongoing pandemic is certainly a factor, the controversy that has plagued the Hollywood Foreign Press Association in recent years is at the root of the overhaul.

This brings us to some vital questions to answer.

What even is the Hollywood Foreign Press Association?

The HFPA, formed in 1943, presents the Golden Globes. The organization is made up of journalists, although selecting those journalists has always been an opaque process. Members submit clips or photographs every year, but there isn’t a set list of acceptable publications, and members are not required to work full-time as journalists.

What are the Golden Globes, exactly?

The awards show kicked off in 1944 to honor movies, and began including television in 1955. In 1958, the Globes were broadcast in the Los Angeles area. National coverage started in 1964, airing on NBC almost every year until 2022. The one previous exception was the 2008 ceremony, which they replaced with an hour-long press conference due to the WGA strike.

The ceremony itself tends to be a bit looser than other awards ceremonies — hence its appeal. Attendees are typically seated at round tables for dinner and drinks, and audience cutaways are a frequent feature of telecasts. Back when TV actors and film actors were a different set of people, it was a novelty to see them all mingle and, thanks to a few categories that make no sense in practice, you get moments like 2012’s Les Misérables taking home a trophy etched with the word “comedy.”

The Golden Globes have long been seen as a bellwether for the Oscars, as the ceremony traditionally takes place in January ahead of Academy Award nomination announcements in early February.

The HFPA distributes some earnings from the telecast to charitable causes and film restoration.

So why is NBC ditching the ceremony?

How much time do you have? The pandemic actually has nothing to do with it, as ceremonies and festivals are postponed, canceled, and reconfigured in rapid succession in the wake of the Omicron surge. In 2021, the Globes shook things up by broadcasting from New York and Los Angeles simultaneously, with frequent co-hosts Tina Fey and Amy Pohler leading the ceremony together from separate coasts.

You know how the HFPA is a mysterious organization? Well, there’s a reason for that. Several reasons, actually.

In 2021, The Los Angeles Times reported that the HFPA had no Black members. The lack of representation impacts the charitable organizations, scholarships, and films that benefit from the HFPA’s resources.

And, of course, nominations and wins, both for the Golden Globes and other awards shows that come later. Case in point: the Emily in Paris of it all.

Art is subjective, of course. You may consider the TV show about one American girl’s misadventures in the city of love to be pure fluff. Well, okay, it’s definitely fluff, but people are entitled to their opinions concerning the quality of the fluff. As a New Yorker headline put it, “Emily in Paris and the Rise of Ambient TV.”

At the 2021 Globes, it was up against Ted Lasso, The Great, The Flight Attendant, and the eventual winner, Schitt’s Creek. Collins herself received a nod for Best Actress – Television Series or Comedy.

Awards shows make confounding choices. That’s part of the fun! However, many pointed out Michaela Coel’s I May Destroy You and Issa Rae’s Insecure, two critically lauded shows created by and starring Black women, got nothing. In fact, one of the Emily in Paris writers published an op-ed about how I May Destroy You deserved nominations over her own show.

But wait, there’s more! According to an LA Times report, 30 members of the HFPA visited the set of Emily in Paris in 2019 and stayed in a five-star hotel courtesy of the Paramount Network.

It should be noted that HFPA has a drastically smaller number of voting members than awards shows of its size. The Golden Globes have traditionally had approximately 90 voting members at a given time compared to the Academy Awards’ 9,000 members and the Television Academy’s 20,000. So when a third of the organization gets a free trip to Paris, and none of those people are Black, it’s no wonder this happened.

One more thing and then we’ll stop picking on Lily Collins: the Golden Globes also appear to love nepotism. Each year, children of celebrities are chosen as “Golden Globe Ambassadors” who actually hand out the awards. Phil Collins’ daughter never took on the job, but it’s something to think about.

Emily in Paris and I May Destroy went on to receive Emmy nominations later that year.

While Emily in Paris makes a good scapegoat, it’s hardly the only recipient of ethically dubious nominations. The LA Times report found that members collected over $2 million in gifts and payments in a year for participating in committees, which could jeopardize the organization’s tax-exempt status.

As far as movies go, “Judas and the Black Messiah,” “Da 5 Bloods,” and “Ma Rainey’s Black Bottom” didn’t get nominations for the top prize in 2021, with every Best Motion Picture Drama nomination going to movies with primarily white casts.

The organization has also come under fire for boxing in Asian and Asian American movies to the Foreign Language Film category. Parasite, which went on to win the Academy Award for Best Picture in 2022, was snubbed in most of the major categories but won Best Foreign Language Film. That award controversially went to Minari the next year, which was filmed in America by an American crew. The Farewell, a film by American director Lulu Wang that was shot both in New York City and Bejing, was only nominated in the Best Foreign Language Film category. The star, Awkwafina, did take home the Best Actress in a Musical or Comedy Award, though.

This is all in line with the HFPA’s rules, which require movies with at least 50% non-English dialogue to compete in the Best Foreign Language Film race instead of the main category, so everything is technically above-board if muddy in spirit. However, in practice, the rule others a large swath of the population, both in America and globally, and implies the superiority of English language films, which includes actual foreign films from England, Australia, etc.

The trouble doesn’t stop there. In 2018, actor Brendan Fraser alleged that former president of the HFPA Phillip Berk groped him at a luncheon for the organization. “I felt ill. I felt like a little kid. I felt like there was a ball in my throat,” the actor told GQ. “I thought I was going to cry.”

Berk denied the claim, and the HFPA released the following statement:

The HFPA stands firmly against sexual harassment and the type of behavior described in this article. Over the years we’ve continued a positive working relationship with Brendan, which includes announcing Golden Globe nominees, attending the ceremony and participating in press conferences. This report includes alleged information that the HFPA was previously unaware of and at this time we are investigating further details surrounding the incident.

Tom Cruise reportedly sent back his three Golden Globe statues to the organization.

That is all very bad. Are they doing anything about it?

Yes. The HFPA is in crisis mode right now. In May 2021, the organization began outlining plans for a major overhaul, including increasing membership by 50% with a focus on underrepresented groups.

“That’s why we’ve already taken some action that will allow us to make swift progress. Because we understand the urgency and issue of transparency, we will be continuously updating the members as we move forward in making our organization more inclusive and diverse,” said then HFPA president Ali Sar. “Again, we understand that the hard work starts now. We remain dedicated to becoming a better organization and an example of diversity, transparency and accountability in the industry.”

When the 2022 nominees were announced, current president Helen Hoehn said, “We also have 21 new members, the largest and most diverse in our 79-year-old history.”

They also placed a ban on members receiving gifts from potential nominees, which is a mind-blowing thing to have allowed in the first place.

So there has been some progress, but it remains to be seen whether it will be enough.

Is there a future for the Golden Globes?

The telecast is a major source of income for the organization, so it’s hard to see how they’ll go on without it should NBC continue declining to air the ceremony. While the network could probably make a deal and hand the rights to the telecast over, there is the question of who would want them, particularly if boycotts within the industry continue.

Netflix, the home of Emily in Paris, is, “stopping any activities with your organization until more meaningful changes are made,” according to a May 2021 statement from company president Ted Sarandos. Amazon Studios and Warner Media followed suit.

Viewers demanding transparency from awards shows en masse is a relatively new thing. April Reign started #OscarsSoWhite in 2015 with a simple tweet, and organizations like Times Up have stepped in to help repair the entertainment industry’s broken systems. The HFPA’s multitude of problems came to a head in the past couple of years, but every awards show is keeping skeletons right beside their statues as they all struggle to keep up their relevancy at the speed of the internet.