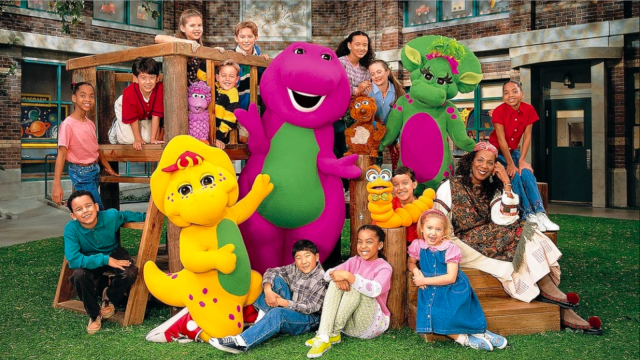 Barney the Dinosaur was the main character on Barney & Friends from 1992 to 2010, sparking the careers of some celebrities such as Selena Gomez and Demi Lovato. The purple dinosaur created by Sheryl Leach that sang about loving everyone and everyone loving him was a fan-favorite to millions of kids, but was also subjected to some very hateful backlash for some mysterious reason. Now, the new Peacock series I Love You, You Hate Me has spawned a trend that has TikTok spinning.

The TikTok trend involves Googling “what killed Barney the Dinosaur” while the user records their reaction. What they most commonly find is in an Independent article, “In November 1997, Barney the Dinosaur was stabbed to death by the New York City Police Department.” While haters take absolute delight in such misleading information, it’s not entirely untrue. There was actually an incident that took place during the 1997 Macy’s Thanksgiving Day Parade where the big purple balloon flying down Manhattan streets started to get a little out of hand due to the wind. The police had no choice but to take him down.

When they watch a video of it, some viewers are shocked by what they see and some find it funny because that means the claim is somewhat real, but the twist on it makes it hilarious. What’s particularly dark about all this is that the hatred toward Barney was very real. It wasn’t a joke to simply hate the very thing bringing millions of kids so many laughs as well as being part of their education. The hatred went beyond the show and extended into real life.

The mini-series begins with a montage of Barney destruction footage from burning stuffed animals to chopping its head off with hedge snippers. Bob West played the original voice of Barney and in an interview with Inside Edition, he shared that, “There was a group called Jihad Against Barney.” He goes on to say in the documentary that he received emails with death threats, “They were going to come and find me, and they were going to kill me.”

Rumors spread that there were drugs in Barney’s tail and that he used foul language around the kids when the cameras weren’t rolling. Those weren’t as bad as the notion that Barney was based on a serial killer. None of these rumors were ever found to be true, but the hatred highway had already been paved for some of the most bizarre behavior.

From websites detailing how to kill the dinosaur to amateur sketches detailing the fantasy, it has been one astonishing ride that Dinosaur Shaming has taken. Scandals related to the happy-go-lucky beast start with the most famous of all the Barneys — David Joyner — being a tantric sex specialist and making the claim that he used to practice techniques while in costume. That news pales in comparison to Patrick Leach — the son of the show’s creator — being arrested for attempted murder after shooting his neighbor back in 2013. He was ultimately sentenced to 15 years in prison.

What’s all the hate about? It’s hard to imagine anyone hating a fluffy purple dinosaur that only tried to put a smile on every kid’s face. Sheryl Leach created the show for that purpose in the first place when her son’s favorite show ended and there was nothing left for him to watch. If all the hype about Barney is intriguing, the two-part documentary I Love You, You Hate Me is currently trending on Peacock for anyone who wants to catch up on the dark side of the kids’ show.