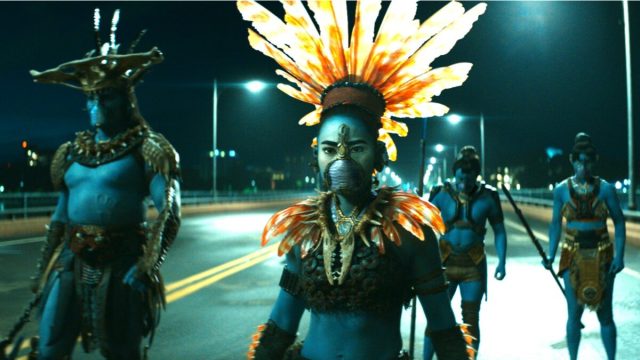 In Black Panther: Wakanda Forever we get to see hundreds of Tālocān and as Namor tells Queen Ramonda and Shuri, his people outnumber all the blades of grass in all of Wakanda, meaning there are countless Talocans viewers we did not see. But that’s okay because our attention has been focused on the badass Namora.

Giving one of the film’s stand-out performances, Mexican actress Mabel Cadena plays the character of Namora, who is based on the Marvel Comics character Aquaria Nautica Neptunia. though she later changed her name to Namora after the death of her father. While the character is called Namor’s “cousin,” they are not blood-related and she was sometimes depicted as his love interest in the comics.

Throughout the film, she is a force to be reckoned with as she sticks by Namor and proves to be a formidable foe for the Wakandan warriors whenever they engage in battle. Needless to say, the actress has grabbed the attention of Marvel fans, who are wondering where they might have seen the Latina star. Although Black Panther: Wakanda Forever marks her Hollywood debut, the actress has appeared in 25 movies and TV shows since 2012.

Cadena was born Mitzi Mabel Cadena in Naucalpan, State of Mexico, Mexico, and holds a bachelor’s degree in psychology, as well as a master’s degree in acting. She began starring in stage productions before making the leap into television and movies in 2012, when she portrayed Adela Rosa Chavez in the HBO Latin America series Capadocia.

She was a series regular in Ingobernable as Citlali López, otherwise known as “La Mosca,” a young woman who was kidnapped and tortured by the government. After appearing regularly in Por la Mascara, La Bandida, and Hernan, Cadena was cast as Amada Diaz in the film Dance of the 41 in which she plays the daughter of Mexican president Porfirio Diaz. The film earned her a Best Actress nomination at the Ariel Awards.

She received a Best Supporting Actress nomination the following year for her portrayal as Ramira in Asphalt Goddess. Set in Mexico City, the film is about a group of women who decide they have had enough of being treated badly by men and wage war against them.

During the filming of those movies, she also starred as Itzel in Monarca, a TV series about a billionaire tequila magnate and the corruption of Mexico’s elite businessmen.

While not much is known about her future projects, seeing that she has found her place in the Marvel Cinematic Universe, we can see with certainlty that she will be accompanying Namor whenever he finally decides to drop his forced alliance with Wakanda.