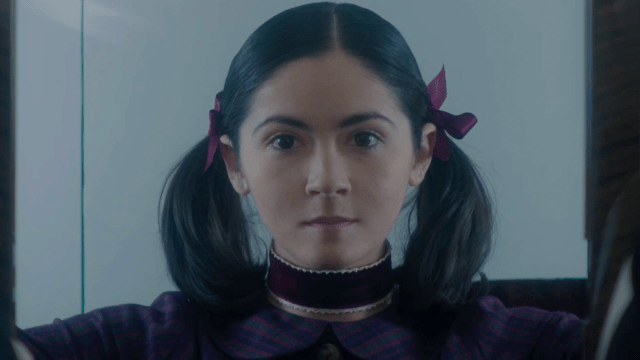 It was way back in 2009 when Isabelle Fuhrman burst onto the horror scene with her turn as Esther, the horrifying antagonist of Orphan and the role that instantaneously launched her to horror icon status. Now, the young actress is returning to her roots in Orphan: First Kill, reprising the role for a prequel that, according to critics, improves upon its predecessor.

But Fuhrman is far from a one-note actress, laying claim to a particularly interesting filmography since her big break on Orphan. With that in mind, here’s where you can find more of Fuhrman’s work, especially if Orphan: First Kill leaves an itch that only the actress can scratch.

Among Fuhrman’s most prominent roles came shortly after her claim to fame, namely in the form of 2012’s The Hunger Games, based on the beloved novel series of the same name.

Fuhrman plays Clove in the film, a nemesis of protagonist Katniss Everdeen. The two wound up facing off, the former ambushing Katniss as the latter was attempting to retrieve medicine for a dying Peeta. Clove was ultimately killed by Thresh, a District 11 male tribute, but otherwise came very close to sending Katniss to her demise. Sadly, though, this probably means we won’t be seeing Fuhrman in any other Hunger Games material that makes it to the big screen.

Before The Hunger Games, Fuhrman became part of the Ghibli family when she loaned her voice to the English dub of Gorō Miyazaki’s From Up on Poppy Hill. In the film, Fuhrman voices Sora, one of the younger siblings of protagonist Umi Matsuzaki.

Sticking with her horror roots, Fuhrman once found herself among the main cast of Cell, a sci-fi horror flick based on the Stephen King novel of the same name. In a world where a radio signal turns a large portion of humanity into bloodthirsty killing machines, Fuhrman’s character, Alice Maxwell, joins up with protagonists Clay and Tom (played by John Cusack and Samuel L. Jackson, respectively) as they try to escape Boston. The film unfortunately fell in the less-favorable pile of King adaptations, but the cast certainly gave it their all.

One of Fuhrman’s more recent turns was in The Novice, a film that landed three awards during its premiere at that year’s Tribeca Film Festival, and which currently boasts a fiery-hot 95 percent approval rating on Rotten Tomatoes. With such praise and endorsements to its name, all you have to know is that it’s a psychological thriller about a girl who joins her university rowing team; with that combination of weight, genre, and pint-sized information on its premise, it’s sure to pique many a curiosity.

For those of you looking towards the future, Fuhrman’s next role following Orphan: First Kill will see her star in the upcoming action-thriller Sheroes. Fuhrman will star as Ezra, one of a group of four friends who set off on an adventure that quickly turns into a fight for survival. The most vulnerable target? The group’s friendship.

Orphan: First Kill is now showing in theaters or can be streamed on Paramount Plus.