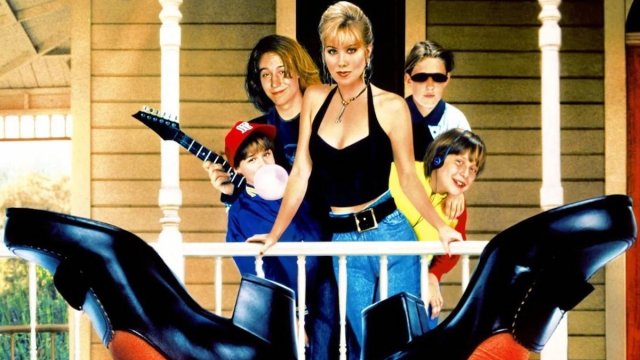 Released over 30 years ago, Don’t Tell Mom the Babysitter’s Dead was a coming-of-age black comedy that starred Christina Applegate in her first starring role in a mainstream movie.

Applegate stars as Sue Ellen “Swell” Crandell, a 17-year-old high school graduate and the oldest of four siblings. When her recently divorced mother takes an unexpected holiday to Australia with her new boyfriend, Swell and her family are horrified when her mother hires a cruel live-in babysitter named Mrs. Sturak to watch the kids. When the tyrant babysitter dies in her sleep, Swell takes it upon herself to find a job and watch over her siblings.

A moderate box-office success, the Stephen Herek- (Bill and Ted’s Excellent Adventure) directed Don’t Tell Mom the Babysitter’s Dead became a hit on VHS and cable, and is now viewed as a cult classic and an important movie in the career of the then 20-year-old Applegate.

So where are the cast of Don’t Tell Mom the Babysitter’s Dead now? Let’s take a look.

Christina Applegate stars as Sue Ellen “Swell” Crandell, a 17-year-old high school graduate who takes on the role of head of the house after her mother leaves on vacation and the elderly babysitter who was hired to take care of Swell and her siblings dies from a heart attack.

Don’t Tell Mom the Babysitter’s Dead marked Applegate’s first big mainstream role in a movie. Prior to this, Applegate’s breakthrough was as promiscuous daughter Kelly Bundy on the popular sitcom Married with Children. Applegate would go on to appear in a number of films such as Tim Burton’s Mars Attacks!, and The Big Hit alongside Mark Wahlberg, before returning to TV in acclaimed sitcoms Jessie and Samantha Who? (respectively.)

Applegate returned to movies with performances in The Sweetest Thing alongside Cameron Diaz, and most notably as TV anchorwoman Veronica Corningstone in the cult comedy Anchorman alongside Will Ferrell. Applegate currently stars in the Netflix black comedy Dead to Me for which she has received numerous nominations.

Cassidy is an award-winning actress known for her acclaimed roles in TV programs Six Feet Under, Call Me Fitz, and Buffalo Bill, for which she won a Golden Globe award. Cassidy also made a mark in film as the replicant Zhora Salome in Ridley Scott’s sci-fi classic Blade Runner, and as Delores in Who Framed Roger Rabbit. Cassidy continues to work with roles in Nicolas Winding Refn’s crime miniseries Too Old to Die Young, and NCIS: New Orleans.

John Getz stars as Gus Brandon, the boyfriend of Rose who sets his philandering eyes on Swell.

Getz is a character actor known for his performance as the jealous ex-boyfriend who meets a grizzly end in David Cronenberg’s The Fly. He also starred in John Hughes’ Curly Sue and David Fincher’s The Social Network, and as corrupt police commissioner Bradley Walker in the Amazon series Bosch. Getz continues to work at a prolific pace, having starred in Netflix series Dirty John and HBO Max series Doom Patrol.

Josh Charles stars as Bryan, an employee at fast-food restaurant Clown Dog who befriends Swell during her brief time working there.

Charles first became known to audiences with his performance as prep school student Knox Overstreet in Peter Weir’s Dead Poets Society. It would be in TV, however, where Charles’ career would truly shine, with accolades for his performance as sports anchorman Dan Rydell in the Aaron Sorkin-created Sports Night, and as lawyer Will Gardner in The Good Wife. Charles currently stars in the HBO miniseries We Own This City.

Keith Coogan stars as Kenneth “Kenny” Crandell, the heavy metal slacker brother of Swell who comes through in the end to help his family.

Prior to Don’t Tell Mom the Babysitter’s Dead, Coogan starred in another cult babysitting comedy Adventures in Babysitting alongside Elisabeth Shue. Coogan would later star alongside Sean Astin and Wil Wheaton in the cult action thriller Toy Soldiers. Coogan’s last on-screen film role was playing a version of himself in Kevin Smith’s Jay and Silent Bob Reboot, while also appearing in TV show The Comeback Kids and The Rookie.

Concetta Tomei stars as Mrs. Crandell, the “mom” of the film’s title who goes on vacation to Australia with her new boyfriend.

Tomei is a theatre, film and TV actress best known for her roles on the Vietnam War drama series China Beach, and the medical drama Providence. Recent appearances include the Netflix comedy Space Force, and the Pure Flix series Going Home.

David Duchovny stars as Bruce, the Head of Inventory at General Apparel West who — along with Carolyn (Jayne Brook) — continuously tries to discredit Swell.

Not long after Don’t Tell Mom the Babysitter’s Dead, Duchovny went on to star in his most acclaimed and popular role yet as FBI agent Fox Mulder in The X-Files, for which he won a Golden Globe award. After film roles in crime thiller Kalifornia alongside Brad Pitt, and the romantic drama Return to Me with Minnie Driver, Duchonvy returned to TV in the black comedy Californication as womanizing novelist Hank Moody, earning himself another Golden Globe.

Duchovny recently starred in the Netflix comedy The Bubble directed by Judd Apatow, and is set to star alongside Eddie Murphy and Julia Louis-Dreyfus in the upcoming comedy You People.

Jayne Brook stars as Carolyn, the receptionist at General Apparel West and sister of Bryan (Josh Charles), who is jealous of Swell.

Prior to Don’t Tell Mom the Babysitter’s Dead, Brook had a memorable minor role as an abused mother in the Arnold Schwarzenegger film Kindergarten Cop. Later, Brook became known to TV audiences as Dr. Diane Grad in the medical drama Chicago Hope, as well as Deputy Mayor Mary Ann Mitchell in the crime drama The District. Brook’s last starring role was as Admiral Cornwell in Star Trek: Discovery.

Prior to Don’t Tell Mom the Babysitter’s Dead, Harris cemented her reputation as a scream queen when she starred in Halloween 4: The Return of Michael Myers and Halloween 5: The Revenge of Michael Myers. More horror movies would follow, including Urban Legend, and the Rob Zombie-directed Halloween remakes. Harris also starred alongside Bruce Willis in The Last Boy Scout, and alongside Sylvester Stallone in Daylight.

Harris is as prolific as ever, appearing in numerous TV and film projects, including Quentin Tarantino’s Once Upon a Time in Hollywood, and the Shudder horror series Creepshow.