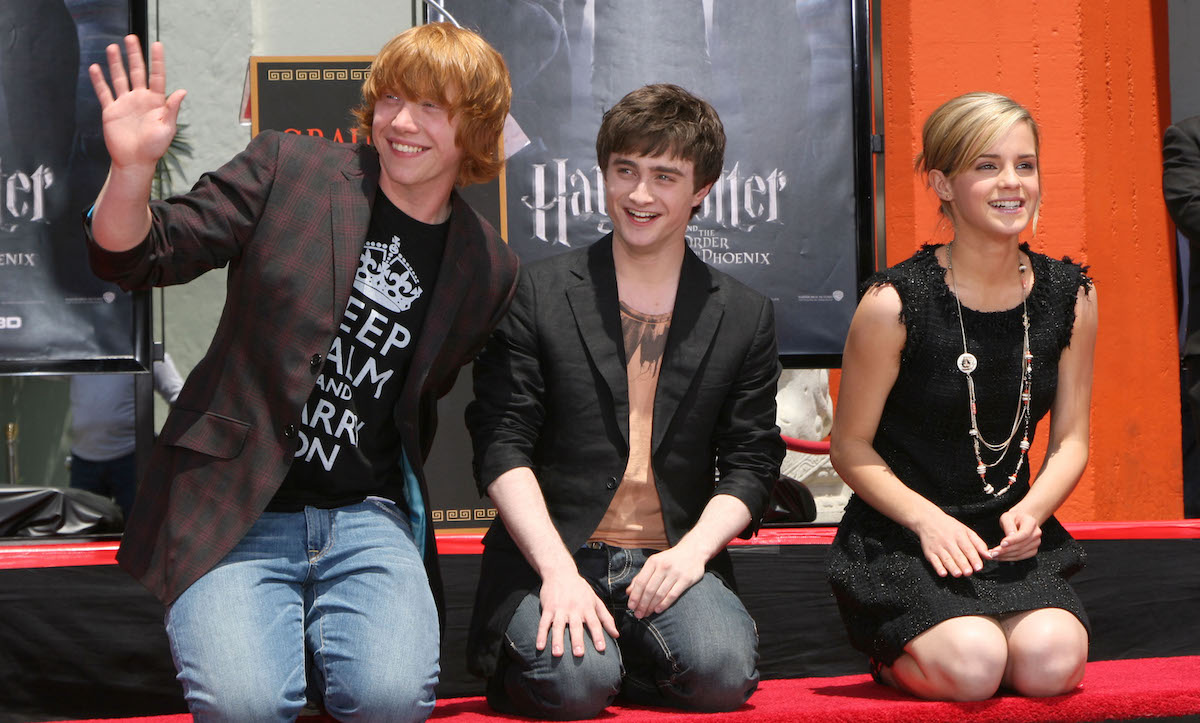 Die-hard Harry Potter fans, aka Potterheads, will forever be obsessed with the magic of the movie franchise as well as the stellar cast members that embodied each iconic role. Some of those actors, including Daniel Radcliffe, Emma Watson, Rupert Grint, and Tom Felton, started filming the epic movies at very young ages, and since then have grown up right before our eyes.

The imaginative and creative mind of J.K. Rowling is of course the reason these magical movies exist in the first place. Rowling wrote some of the best and most beloved novels of all time, which inevitably led to the film adaptations and the global expansion of the Potterdom.

In case you missed the Harry Potter 20th anniversary reunion special Return to Hogwarts on HBO Max, here’s a look at what some of the major cast members are up to these days.

Daniel Radcliffe plays the titular role in the Harry Potter movie franchise, and these days, he’s still acting regularly. Some of his most recent projects include Jungle, Guns Akimbo, and Escape from Pretoria. He has an upcoming movie called The Lost City on the way, which is projected to be released in 2022 and is classified as both a romance and an action flick. Once this newest movie is released, it will further prove that Radcliffe is a versatile actor capable of playing roles beyond just Harry Potter. As far as his love life goes, Radcliffe has been dating actress Erin Darke for nearly 8 years. They met for the first time on the set of Kill Your Darlings in 2012 and have been together ever since.

After landing the role of Hermione Granger in the Harry Potter franchise, Emma Watson‘s career only blossomed from there. She is so much more than just an actress ⏤ she’s also heavily involved in the world of activism. In terms of the movies she’s acted in post-Potter, Watson has starred in Little Women, Beauty and the Beast, The Bling Ring, and The Circle in recent years. From 2009 to 2014, she attended Brown University and is now a graduate with a Bachelor’s Degree in English Literature. In her personal life, Watson is in a relationship with a man named Leo Robinton. She’s been known to keep her personal life as private as possible, so her long-lasting relationship with Robinton has been something of a secret from her fans.

Rupert Grint is everyone’s favorite redhead from the Harry Potter films. He played the role of Ron Weasley, Harry’s best friend and eventually Hermione’s love interest. He was only 11 years old when he was cast in Sorcerer’s Stone and only had prior experience acting in school plays at his local theater. His life changed forever after becoming Ron Weasley, and since filming the last Potter movie, Grint has starred in other films including Into the White and Moonwalkers. He also lent his voice to an animated flick called Underdogs. As far as who Grint is currently dating, he’s been in a relationship with Angus, Thongs, and Perfect Snogging actress Georgia Groome since 2011. Even though they’ve been dating for such a long time, they’ve managed to keep their relationship out of the spotlight for the most part.

Tom Felton might have played Draco Malfoy, the resident bully of the Potterverse, but in real life he’s not like that at all. Since leaving the character of Draco behind, he’s been part of the popular DC series The Flash since its third season, starring alongside Grant Gustin, Candice Patton, Danielle Panabaker, and Tom Cavanaugh. He plays the role of Julian Albert on the show, a cynical scientist who has something of a sharp tongue. Because of his connection to Harry Potter, the Flash writers have chosen to incorporate a long list of Potter Easter eggs into season three’s episodes. Rumors about a possible relationship between Felton and Emma Watson made their rounds in 2020, but it turns out that there’s nothing going on between the two. Felton dated a woman named Jade Olivia Gordon for eight years from 2008 to 2016, but since then it seems that he’s remained single.

Potterheads will remember Bonnie Wright for her portrayal of the lovable Ginny Weasley. At first, viewers think she’s nothing more than Ron Weasley’s shy little sister, but she ends up becoming Harry Potter‘s love interest. Since wrapping up her role in the franchise, Wright has appeared in some interesting projects including Those Who Wander, The Sea, and Who Killed Nelson Nutmeg? Potter fans wanted to see her end up with Daniel Radcliffe in real life, but that relationship was never in the cards. As of now, Wright is totally single, but she was in a long-term relationship with Jamie Bower from 2009 to 2012.

The character of Neville Longbottom was portrayed in the Potter films by Matthew Lewis. It’s clear that he’s grown up quite a bit since playing the dorky, quirky character. Lewis has played new roles in projects such as Me Before You, All Creatures Great & Small, and Bluestone 42 in recent years. He’s been married to Angela Jones since 2018, and the photos of their wedding ceremony are absolutely adorable.

Evanna Lynch played Luna Lovegood in the Potter films. It’s true that Luna was a somewhat creepy character, but she still had good intentions throughout the films and ultimately became an ally to the main trio. Some of Lynch’s projects after Harry Potter have included My Name is Emily, G.B.S., and Addiction: A 60’s Love Story. Lynch has been dating Robbie Jarvis for over nine years despite not announcing to the world that they were together until 2015. It doesn’t look like they’re married just yet, though.

Who else could have played Bellatrix as well as Helena Bonham Carter? The correct answer is no one. Carter is an extremely talented actress who is known for so much more than just her role in the Harry Potter films. Some of her other major roles in recent years include Ocean’s Eight, Enola Holmes, Alice Through the Looking Glass, and The Crown. Carter has taken home numerous Screen Actors Guild Awards, Critic’s Choice Awards, and BAFTA Awards over the years.