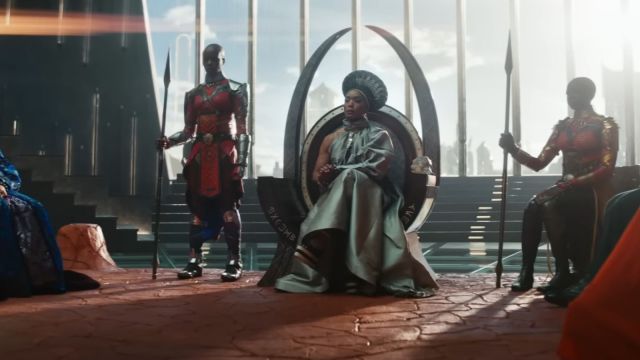 The ending of Black Panther: Wakanda Forever has raised questions about the identity of Wakanda’s newest leader. This is because, at the start of the film, they made it clear that Ramonda would be Queen of Wakanda since Shuri is still young. But after her death, the direction of the plot implied that the princess was next in line, but it wasn’t clear to the viewers.

Even though there isn’t a simple answer, the impeccably crafted film scattered clues and gave three possible candidates for Wakanda’s next leader. And one of these three had a high chance of taking the throne. While the answer was vague, at least the identities of these possible candidates made sense.

So, under whose rule will Wakanda fall now?

The first and easiest answer would be Princess Shuri since she’s part of the Wakandan royal family. She also now possesses the power of the Black Panther after she recreated the heart-shaped herb using the bracelet that Namor gave her, which contained a special plant with similar properties.

However, the only reason why Shuri couldn’t be next in line for the throne is because she didn’t take part in the Incoronation ceremony. In the first film, it said that anyone in Wakanda can challenge the royal family if they want to take the throne. While most tribes refused due to their confidence in T’Challa, M’Baku challenged the prince and yielded before his death. Similarly, Killmonger challenged T’Challa since he too was part of the royal family.

If Shuri didn’t take part in this mandatory coronation ritual, there is a chance that she chose not to rule the country.

M’Baku is the leader of the Jabari tribe and played a massive role during Talokan’s attack. Not only did he fight for the country, but also offered a place of evacuation due to fears of Namor’s return. In the first film, he wasn’t fond of the royal family as he wasn’t confident of T’Challa’s leadership and also disliked the fact that most of the country’s technology was “overseen by a child who scoffs at tradition.”

But despite their differences in the first film, the royal family respected M’Baku as his tribe was able to retrieve T’Challa’s body. Nakia was willing to give the last heart-shaped herb to M’Baku, in hopes he would be Wakanda’s protector as the Black Panther.

At the end of Wanda Forever, M’Baku appeared during the Incorornation ceremony, not Shuri. He declared that he too wants to fight for the throne, and did not mention that he was stepping in for the princess. So there is a chance that the Jabari tribe took over the country.

However, there is one more candidate to consider as Wakanda’s ruler.

During the film’s end-credit scene, it was revealed that T’Challa and Nakia had a child, meaning that the line of succession should fall to him. Named Azari T’Challa, after his father, he was raised in Haiti with Nakia so that he didn’t receive any pressure from the throne. The child met Queen Ramonda in the past and only encountered Shuri recently.

Unfortunately, this child isn’t declared king yet for a few reasons. First of all, he’s a minor, meaning he isn’t ready to take the throne, not to mention too young to take on the powers of the Black Panther. Also, no one outside the royal family knows about his existence. But perhaps in the future, T’Challa will be of age to return to Wakanda and claim his birthright.