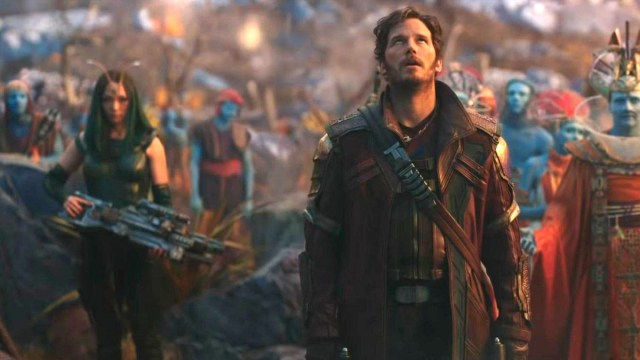 Despite featuring prominently in promotional material for Thor: Love and Thunder, intergalactic misfits the Guardians of the Galaxy disappear from the film within its first twenty minutes, leaving many wondering: why didn’t they have a bigger role?

If you were a diehard fan of the Guardians of the Galaxy and were looking for a hit before either the Guardians Holiday Special (due Dec. 2022), or Guardians Vol. 3 (due May 2023), you likely left the theater disappointed and a tad malnourished. Here’s why they didn’t have bigger roles in the film.

Why didn’t the Guardians of the Galaxy have bigger roles in Thor: Love and Thunder?

There’s several reasons why they were not at the forefront of the film, so let’s have a look at just a few of those reasons.

Where would they fit?

Thor: Love and Thunder is primarily focused on the character arcs of Thor and Jane Foster, and them learning to love again after years away from each other post-breakup. The presence of Christian Bale’s Gorr the God-Butcher is an obvious complication, but really, what threat would the Guardians pose to someone wielding a magical sword that even Mjolnir and Stormbreaker are only equals to? What character arcs could they possibly have in a two hour film not about them?

Saving them for a bigger occasion

The Guardians of the Galaxy are very much fan favorites of the Marvel Cinematic Universe, and there’s a much spoken about rule about having too much of a good thing, as well as absence making the heart grow fonder. The last appearance of the team was snippets during Avengers: Endgame’s final battle, as well as some housekeeping setting up this film.

There’s two projects coming up in a very short amount of time with the lovable group, with the Disney Plus holiday special due out Dec. 2022, and Guardians of the Galaxy Vol. 3 due May 2023. Would it be as impactful to see them in those movies if they had massive roles in this one?

The Marvel universe is ever-expanding, and since 2015’s Ant-Man, which featured a fight sequence with Anthony Mackie as Falcon, we’ve gotten used to the idea of heroes crossing over and seeing each other for reasons that mostly don’t matter to the plot. Thor: Ragnarok featured a very memorable sequence set in the Sanctum Sanctorum, as Doctor Strange agrees to help Thor and Loki find their father Odin.

Perhaps it’s also just what director Taika Waititi likes to do to make Thor’s importance to the universe feel known. The Guardians serve a very small, but important purpose to the film’s set-up of showing how Thor has adapted after Endgame, and showing that he’s actually been up to something in the two years between appearances.

Fans can hold on tight though, as said there are many upcoming projects to feature the Guardians of the Galaxy. Thor: Love and Thunder is currently in cinemas.