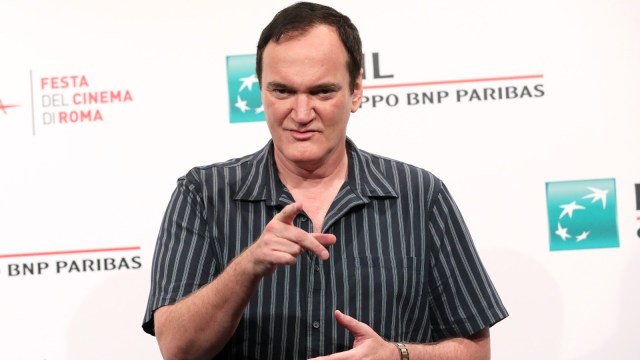 One of modern cinema’s great auteurs, Quentin Tarantino has been repeatedly scrutinized for the excessive use of the n-word in his screenplays.

Countless digital ink has been spilled on the topic, from genuine attempts to count the number of racial slurs in his films, to think-pieces about why it diminishes his work, as well as others arguing the exact opposite. One of the first people to criticize Tarantino’s use of the n-word was fellow auteur Spike Lee, back in 1997, following the release of Jackie Brown.

The racial slur is used 38 times in the 1997 flick, primarily by Samuel L. Jackson’s character, Ordell Robbie, a street dealer. “Quentin is infatuated with that word. What does he want to be made—an honorary black man?” Lee told Variety at the time. “I want Quentin to know that all African-Americans do not think that word is trendy or slick,” he said, adding that, given the racial bias of the time, Lee’s films would not have been made if they contained a racial slur that many times.

Lee’s comments led to a heated back and forth between the two directors for years, with Tarantino saying the Do The Right Thing filmmaker thought of himself as an authority of how to handle Black issues in films. “F-ck that,” Tarantino remarked in a 2003 interview with Playboy magazine.

Regarding the validity of Lee’s arguments, however, Tarantino said it was true to Ordell’s character and social context that he would use the word that often when speaking. He has maintained that stance since.

Language accuracy, however, isn’t really enough to excuse Pulp Fiction‘s Jimmie Dimmick’s use of the word, no matter what Tarantino says. Even Jackson, who defends the director’s freedom to use whatever language he sees fit in his scripts, drew a line when it came to that scene, advising him against it.

“When we did Pulp, I warned Quentin about the whole “n—-r storage.” I was like, “Don’t say ‘n—–r storage.’ ” He’s like, ‘No, I’m going to say it like that.’ And we tried to soften it by making his wife Black because that wasn’t originally written,” the actor told Esquire in 2019.

In Tarantino’s 2012 movie Django Unchained, set in 1858 Texas, and revolving around slavery, the n-word is used 110 times. Lee wasn’t a fan, of course, calling the film “disrespectful to my ancestors.”

Django, like every Tarantino film, depicts graphic violence, and a whole lot of blood, which, in the context of that particular film, made Tarantino more nervous than the excessive use of the racial slur. In an interview with NPR while promoting the film, Tarantino said he was encouraged by iconic Black actor Sidney Poitier to not hold back in his depiction of historically accurate violence.

Tarantino also spoke on the influence Black culture, particularly Blaxploitation movies, had on his artistry, rooted in his childhood experiences.

“I went to a mostly black school…at different points in my life, I was raised by Black people, raised in Black homes…kind of the United Nations aspect that my mom’s house was in the early ’70s. So Black culture was my culture growing up.”

The Blaxploitation subgenre, which emerged in the 1970s, was much like the Django director’s movies, violent, explicit, and sexual, for the sake of shocking the audience, and making an impression. However, they’re subversive in the way they portray this content, usually containing underlying commentary on how obsessed our society seems to be with it.

Django, like Blaxploitation movies, is revisionist in the way it gives its slave protagonist, played by Jamie Foxx, a heroic journey about destroying his slave masters. Jackson, who has starred in six of Tarantino’s nine movies, calls the controversy “bullshit.”

“You can’t just tell a writer he can’t talk, write the words, put the words in the mouths of the people from their ethnicities, the way that they use their words. You cannot do that, because then it becomes an untruth; it’s not honest. It’s just not honest. And half the time, too, there are other ways. And I generally add like at least five n—-s to what Quentin has already written, just because I’m talking,” the actor told Esquire.

Essentially, the use of the n-word in Tarantino’s movies is done with the excuse of historical and social accuracy (except when it isn’t). Its overuse, however, one could argue, intends to shock the viewer, just like all the blood, sex, and other profanity (the word “f-uck” is said over 900 times across his filmography) present in the director’s work.

Whether it’s Lee or anyone else critiquing this fact, Tarantino is adamant on here he stands. Like he told CNN‘s Chris Waller on his HBO Max talk show, recently, “You should see [something else]. If you have a problem with my movies then they aren’t the movies to go see. Apparently I’m not making them for you.”