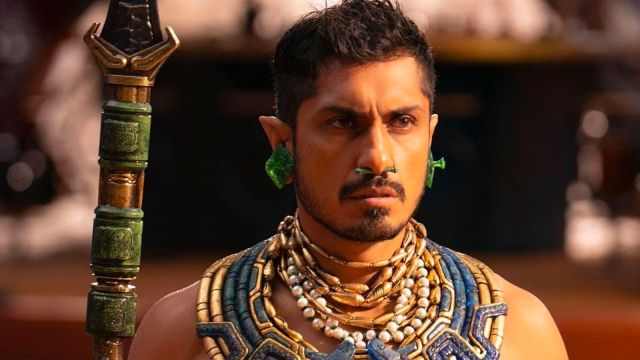 Image via: Marvel Studios
Review of:

Tenoch Huerta gave an outstanding performance as Namor in Black Panther: Wakanda Forever. However, it has been revealed that another person was considered for the role of king of Talokan. Oddly enough, this person that Marvel Studios considered reportedly had no acting experience whatsoever.

According to Fightful Select, Marvel Studios reported that WWE superstar Damian Priest (aka Luis Martinez) was another potential candidate for the Black Panther villain. Marvel Studios approached the wrestler, despite knowing that he has no acting experience whatsoever, and asked him to read two lines. It was also reported that Priest was also considered a role for another prominent Talokanil character. Eventually, as we know, the role of Namor went to Tenoch Huerta instead.

It’s currently unknown why Marvel changed its mind, despite the current trend of wrestlers entering the acting industry. Upon hearing this revelation, fans on r/SquaredCircle, a subreddit for wrestling fans, believed that Priest would be perfect in the MCU, but perhaps in a different role. Fans have acknowledged Martinez’s ‘smooth and bassy voice’ and how he could be a voice actor or play the Marvel villain, Attuma.

Meanwhile, others have acknowledged the success of Dave Bautista in Guardians of the Galaxy and how he ended up in other prominent acting roles outside the MCU. This sparked a debate as to whether or not wrestlers should be considered for large acting roles, even if they have no acting experience whatsoever. Some argued that studios are after an established face, hence why they’ve gone after known wrestlers.

Casting someone for a major role with no acting experience could be a risky move, hence why the wrestler was also considered for a minor role. This argument also extends to how the MCU casts lower-tier actors and how they got huge right after their involvement in Marvel films.

Priest may not have been the Namor that the MCU originally pictured, but fans continue to hope that he might be considered to play Attuma in the future. It’s currently unknown if Priest would consider auditioning for the MCU once more, but let’s it’s clear there are fans out there who are ready to see him on the big screen.